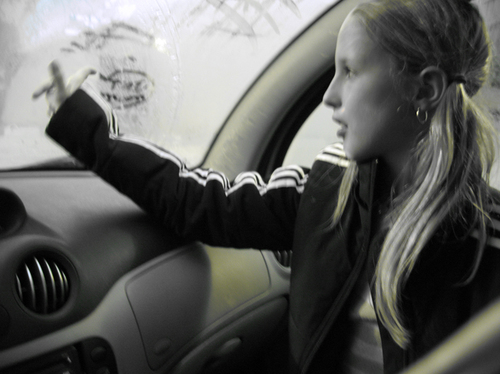 At a country crossroad where one, two, three, four paths meet--two of which are dirt roads--I slow down. With the help of peripheral vision I sense an object speeding forward to my right. I am amazed to encounter another car!

Right, priorité à droite!* I remind myself, giddy at the chance to give another driver the right-of-way. Only, given the hairpin turn awaiting the other driver, I have to put the car in reverse in order to make room.

Back to that unglamorous glitch. I look down to the floorboard, toward the foot pedals hidden behind those gigantic slippers. Time to act quickly before secours arrives! I push in the clutch, put it in first, and all but pole-vault the front end of my car into the ditch. Whereas the back end had only flirted
with the fall, it is in forgetting to straighten out the wheel that I dig my own descent.

I look up, as one does for mercy, and notice something in the rearview mirror: two strangers slowly appearing amidst the dust cloud. One man is smoking a pipe, the other has car keys in his hand. I recognize The Right-of-Way driver and co-pilot. I see them jump into the ditch, walk over to the dangling front tire and lift it up--along with the car!

"Avancez,"* they say, holding the car in the palms of their hands.

The situation is surreal and there, behind the wheel, I feel uplifted by the strangers' secours.* I AM uplifted, as is my car! My eyes do a double-take and I see the pipe in one man's mouth, a smile on the other's. Sweat begins to appear on their collective brows.

"Vous voulez que j'avance?"* I say, afraid to run them both back into the ditch.
"Oui, Madame," they answer, politely, painfully, sweat now pouring down.

*     *     *
Looking back I saw the men waving, unharmed. I had thought it was I the Good Samaritan. Slippers tucked safely now beneath a spared ego, I think again.

Shopping:
"FRENCH in 10 minutes a day" is a fun, dynamic and engaging way to begin your love affair with French.
Chansons Pour Noel: Songs for Christmas (in French)
French Country Diary 2008 (Calendar)