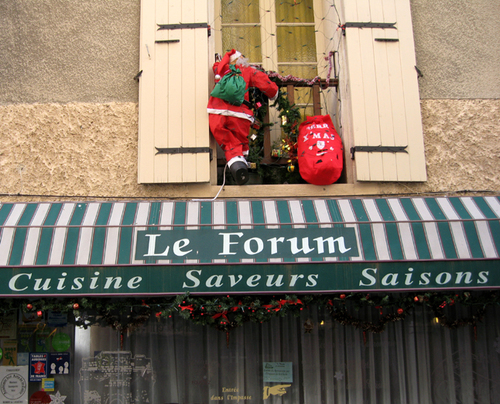 The halls are still decked in many French towns... including Orange.

When my husband's aunt came to visit from Paris she brought homemade quenelles and her contagious curiosity.

"Alors, fais voir ta jolie maison!" Setting the warm dumplings on the picnic table, Aunt Michou followed me into the farmhouse, still in the middle of renovation: cords, wires, and scaffolding made it difficult to navigate, but Tante Michou ignored the obstacles, so happy was she to see our new place.

Many "OH LA LAs" ensued as Aunt Michou, through the eyes of a Parisian apartment dweller, viewed our new nest.... 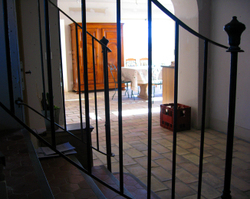 At the top of the staircase we stepped into my son's room.

Michou caught her breath and looked up at the wooden beams.
"Oh là là!" she exclaimed. Shaking out her hand, as if to dry it. She was definitely impressed!

Aunt Michou paused to mentally group together the last few rooms. "In Paris," she explained with a widening of her arms, "this area alone equals an apartment!"

When the tour was complete, Aunt Michou turned to me.
"Oh là là," she concluded. "There's enough room here to hide 50 lovers!"

In the time it took for me to worry about whether or not that was an accusation, Aunt Michou added: "...and 50 for Jean-Marc!"

As I swapped one worry for another, I turned to find that Aunt Michou had vanished. Off she'd gone to put those homemade quenelles into the oven, the hottest hideout in the house.

~~~~~~~~~~~~~~~~~~~~~~~~~~~~~~
:: Audio File ::
Listen to my son, Max, pronounce the French word "cachette" and read today's quote: La poésie est à la fois une cachette et un haut-parleur.
Download cachette.wav
Download cachette.mp3
.
Featured book: "Seven Ages of Paris" by Alistair Horne
When Paris was a small island in the middle of the Seine, its gentle climate, natural vineyards and overhanging fig trees made it the favorite retreat of Roman emperors and de facto capital of western Europe. Over two millennia the muddy Lutetia, as the Romans called Paris, pushed its borders far beyond the Right and Left Banks and continued to stretch into the imagination and affection
of visitors and locals. Now the spirit of Paris is captured by the celebrated historian Alistair Horne, who has devoted twenty-five years to a labor of love. Buy the book.

FRENCH in 10 minutes a day is a fun, dynamic and engaging way to begin your love affair with French
Learn to speak French with Rosetta Stone French. Proven effective by NASA astronauts, Peace Corps volunteers and millions of students worldwide