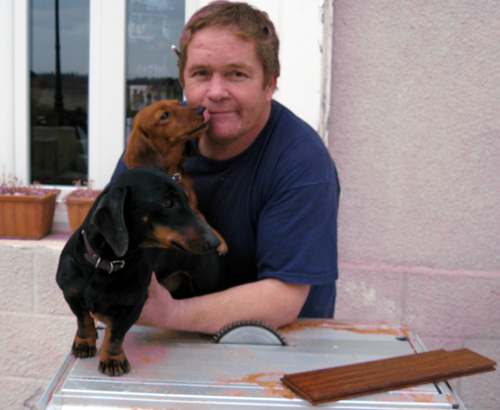 Yves and the dashing hounds or "teckels"... more about this survivor in today story!

In books: "Chasing Matisse: A Year in France Living My Dream" by James Morgan: "A lovely memoir, travelogue and art history...Morgan's passion...might even inspire some readers to follow dreams of their own." --Arkansas Democrat-Gazette
.

Yves the carpenter is back and so are the dachshunds. "How are you?" I ask Yves.
"Ça va toujours!"* he answers, and the little log-shaped dogs bark their accord. If his answer isn't convincing enough, his song is. He whistles as he works. From the dramatic '"J'ai Deux Amours"*... to the seasonal "Petit Papa Noël" -- and never mind the season.

Perhaps Yves does have two loves and perhaps he still believes in Santa. I don't know. I'm too shy to ask and, besides, it is none of my "onions" as the French would say. Best to tend to my own potager* -- that being the piles of paper on my desk, both virtual and hard copy.

When Yves is finished with work, he waits for Jean-Marc to return from an errand. I ask Yves whether he would like a cup of tea, and his bright eyes encourage me. I set a cup of jasmine tea on a large saucer and add a teaspoon of wild honey from our Mediterranean scrubland. Beside the tea, I set several butter cookies, a handful of dates, and one chocolate snail, still in its gold foil carapace.* I have second thoughts about the dates--don't they look like so many legless cafards?*--but reassure myself that not everyone sees things as I do. I put a few "cafards" on my own plate, willing them to look like dates.

Next, I set Yves's tea on the table, wish him bon appétit,* and take my own goûter* upstairs. A moment later my daughter, Jackie, walks into my den.

"Monsieur is all alone," she points out. "Why don't you go and talk to him--you know, keep him company? The French words that my daughter uses: "tenir compagnie,"* somehow have me sounding like a Gallic geisha. There goes my imagination again.

Shrugging off timidity, I take my tea, cafards, cookies, and chocolate snail back downstairs. "Would you like another cup of tea, Yves?  There's thyme, rosemary, queue de cerise*... or more jasmine if you like..."

"It doesn't matter which," he says, from his chair at the kitchen table. "I can't taste anything anyway." I look at Yves' plate and notice that the cookies, dried fruit, and chocolate are still there. Maybe that's an excuse, and others do see things as I do! He's just trying to get out of eating that dried fruit "cockroach".

"Ah bon?"* I say, inviting an explanation.
"I had an accident several years back," Yves begins. "I'll never forget the date--which corresponded with the World Cup final! The year was 1998..." Yves tells me the story of his near-fatal fall. While renovating a house in the medieval village of Beaucaire, he was repairing a second-story floor when the rotting planche* on which he stood snapped. The wooden planks were covered with with heavy squares of stone as was the custom of another architectural era....

The fall was nothing, he assured me. It was the shower of stone following him to the ground that almost took his life. The last stone landed on his face, crushing it.

Yves was hospitalized for six months in Montpellier. Doctors, uncertain their patient would survive, waited five weeks to begin reconstructive work. Yves's face was patched back together, "renovated" just like the façade behind which Yves had plunged. Though the doctors did an excellent job sewing him back together, they were unable to reconnect the miniscule, intricate olfactory vessels just above his nose, on the bridge between his eyes. For this reason, he cannot smell and, by consequence, taste.

Yves's teckel* hounds reach up to lick his face, sealing his account with canine kisses. When Yves begins to whistle again, I realize just who those "Deux Amours" are: the little log-shaped dogs, certainly, and Life.