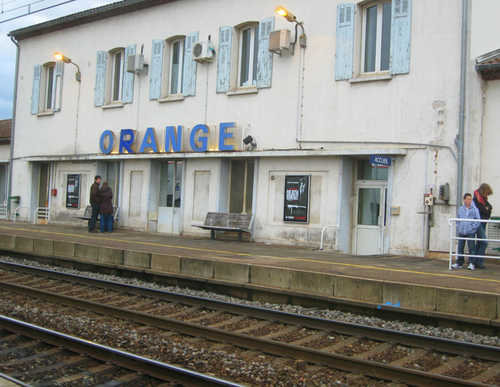 But puéril(e) is an English word! I hear you say, as you discover today's "mot". Well, good for you (!) ...as for me, I didn't know the word. Does that mean I have a "childish" vocabulary? To be fair, I know an even more difficult word: la puériculture (infant care; nursing)! Having spent time in two French maternity clinics, I picked up the term -- along with two little Francophones that the French stork left there for me... For a little comic relief, please read the chapter "Naître" in my book "Words in a French Life".

Mieux connaître Dieu, ce n'est que mieux comprendre combien il nous est impossible de le jamais connaître. Je ne saurais dire lequel des deux est le plus puéril, de le nier ou d'essayer de le définir. To know God better is only to realize how impossible it is that we should ever know him at all. I know not which is more childish to deny him, or define him. --Samuel Butler
.

I guess this "role reversal" thing began sometime around the age of two-and-a-half, when my son, Max, buckled into a child-safety seat in the back of the car, offered me some comforting reassurance.

At the time, and in the town of St. Maximin, I was trying to back out of a narrow parking space when uncertainty struck: were any cars approaching? As I voiced my doubts, another voice, "littler" and with angel wings, floated over from the back seat. "Ne t'inquiète pas, maman!" Don't worry, mommy.

Ten years later, my son continues to offer counsel. At the train station in Orange, while waiting for Max's friend, Alex, to arrive from our former hometown of Les Arcs-sur-Argens, I snap a few photos of the gare* when a not-so-little-anymore voice interrupts:

"Mom! Mets-toi derrière la ligne jaune!" Stand behind the yellow line! Max cautions, concerned that I have overstepped the safety boundary. I am familiar with that overprotective voice. Usually it is my own.

Driving home from the station, I overhear the boys discuss the cost of living and wonder why they aren't talking about sports or Tecktonik instead? Le coût de la vie* seems a serious topic for 12-year-olds.

As I listen to the kids discuss inflation, and after the admonition that I received back at the train station, I begin to sense myself shrinking behind the steering wheel...

Later that night, as I prepared for bed--a good hour before the kids--I stood brushing my teeth at the sink. As usual, I reached over to feel the bristles of my husband's toothbrush, to verify that he had indeed cleaned his teeth. When the bristles were dry to the touch, a red flag went up and my mouth dropped open:

"Jean-Marc!" I called over to the bed. "Did you brush your teeth?"
"Oui," said he, a little guiltily, admitting only to having eaten a piece of candy afterwards.
~ ::: ~
While the children stayed up late, possibly to talk politics, a couple of puérils* parents nodded off to sleep. In the absence of a pacifier, one of them nursed a square of chocolate; as for the other, her hand remained wrapped around a book* in place of a stuffed bear. As the book slipped from her side, to
eventually fall to the floor, so did worry, concern, and the nagging grip of consciousness.

Recommended: Immerse yourself in French while driving, doing chores, or relaxing at home: listen to French music and, in books, Quiet Corners of Paris: a Francophile bestseller
.

Shopping:
1. In French film: Blame It on Fidel : A 9-year-old girl weathers big changes in her household as her parents become radical political activists in 1970-71 Paris.
2. Learn French in Your Car (Audio CD)
3. Brainy Baby French (Video): Studies show that children exposed to a second language during the first few years of life can more easily master the sounds of that language.