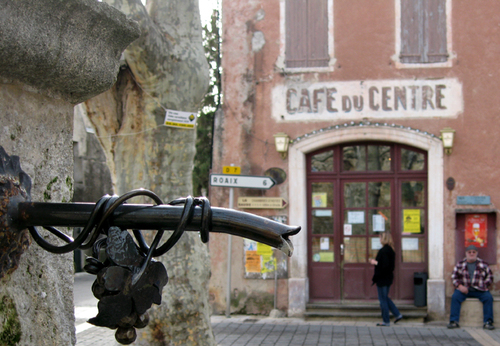 The picturesque The town of Villedieu (Drôme)

Sure, you know the French word "le vinaigre" (vin + aigre = wine + sour--or "sour wine"), an ingredient we usually include in salad dressing, but do you know this delightful expression: "faire vinaigre"?

I'm adding it now to my other favorites: "dar-dar!" (double-quick) "illico!" (right away) and "chop chop" (Get movin'!) ...Maybe the last one isn't French, but it seems culinary--like our vinegar idiom--and it means the same thing: to hurry up, get a move on!

Speaking of rushing, today's story does little to illustrate a tumultuous life. Instead, I invite you to look through the lens of childhood and into a 12-year-old French boy's "passe-temps." Some call this period "the wonder years". I find it wonderful as well--oh so wonderfully swell!

(A quick word before our story begins: Jean-Marc and I will be in Seattle, Portland, San Francisco, LA  & Phoenix - Feb 12-16. More information here.) 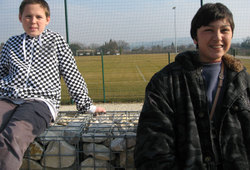 When my son, Max, told me not to worry, that the jam jar on loan to Karim would be returned tomorrow, I felt a little embarrassed. After all, what would Karim's mother think about my seemingly demanding the return of a jam jar! Besides, it wasn't even a pot de confiture,* but a meager moutardier!* It was the kind of jar one throws away, setting only a few aside for one's belle-mère* to refill with homemade tapenade.*

"Max, Karim could have kept the jar! Besides, why did you give him an empty pot?
"It wasn't empty."
"Ah, bon?"*
"There was vinaigrette in it."
"Salad dressing?"

Like that, dar-dar,* I remembered the boys' culinary aspirations. Max and his pal, Karim, dream of being chefs one day! And not in just any greasy spoon, gargote,* or "boui-boui,* they are quick to point out.

Étoilé?* As in 5 stars, I wonder. Looking at the boys, I decide that they already have two stars: one each, they with hopeful eyes that sparkle like the Milky Way. Who wouldn't give them 500 stars? Five thousand! Five billion light years' worth of stardust -- only the finest!

My mind projects into the future and I see two dashing young Frenchmen in New York City standing beneath a striped awning that reads Chez K & M (Karim's Kabyle* and Max's Mediterranean Specialties).

I see a line that runs down Madison Avenue upsetting traffic when even the crosswalks are clogged. Customers are gaga about the Algerian-French food four blocks up. The chefs are sensational (and sweet!) with their neatly parted hair and the polished brass buttons on their crisp white "chef coats".

Neat? Polished? Crisp? My eyes return to the messy countertop in my own kitchen, where the boys have been enjoying their edible experiments, the latest being vinaigrette.

Never mind the mess. It is what will one day be amiss that has me anchoring my attention to the present moment. I don't want to lose these little guys to the big city, be it New York, Paris, Milan -- or to star-spangled Mars, whatever they'll call its city one day. And so I'll savor one last image: that of a
starry-eyed boy cycling through the streets of Sainte Cécile, salad dressing in the sack on his back. For now, we have vinaigrette! As for the future, we are, thankfully, not there yet.

Shopping:
My mom, reading from Mexico, is mad about Julia's book, take a look.
Mom's other favorite: Words in a French Life: Lessons in Love and Language ....
The organic French herbs kit contains a specialized mix of herbs, perfect for French cooking
French in Action : A Beginning Course in Language and Culture, the Capretz Method