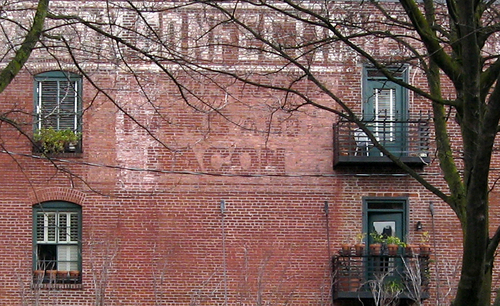 The writing on the wall in Portland, Oregon.

:: Featured product :: The Francophile journal that travelled with me through the US. There's even a pocket in the back for receipts, business cards & assorted "paperasse". See it here.

America seemed less foreign last week. There used to be a reverse culture shock when, returning to my former hometown from France, I would notice "all those big cars" and "all the heaping helpings" and "all those wide roads". Why, you could slalom through traffic without even changing lanes... that is, if you had a Citroën instead of a gas-guzzling rover, a Hummer or a "space wagon". American cars sure can take up width, just like those French Rs sure can take up breath.

I didn't stop to wonder about where the faux foreignness went. Instead, I listened to the purr of so many American accents. By the end of our trip, I could hear more than southern drawls, northern nasals, and New York "cahs".* I could hear Seattle's accent.... and Oregon's. And... what was that? Nah, there
couldn't be an accent in Utah! Even my hometown had its own particular sound. I heard Phoenix for the first time ... or was that "Valley Girl" speak? Perhaps "Valley Talk" is the politically correct term these days. A lot has changed since the 80s, when I still had a toe on American soil before parking both feet
in France for good.

Accents, drawls, and dialects aside, the one thing all that "city-slur" had in common was the slinging and "slanging" of the word "like". I listened to an elegant Uptown type salt and pepper his sentences with the word "like". (As for me, I was all, like, No way! To think that the upper crust and this Valley Girl, like, shared something! Even if it was the "meaningless verbal hiccup"* that is the word "like").

More than language, I revelled in the ronron* and hum of the Valley of the Sun.* It may have been all of those American accents, and a few, like, hiccups, that led me, linguistically, home again.

*     *     *
My children's impressions of the States in the next edition... in the meantime, read more about our "love fest" (aka book signing)!: see Peggy Sturdivant's blog: http://blog.seattlepi.nwsource.com/ballard/archives/132186.asp?source=rss

Les Portes Tordues (The Twisted Doors) is an exciting book and audio CD that teaches French by capturing and immersing students into an intriguing mystery.