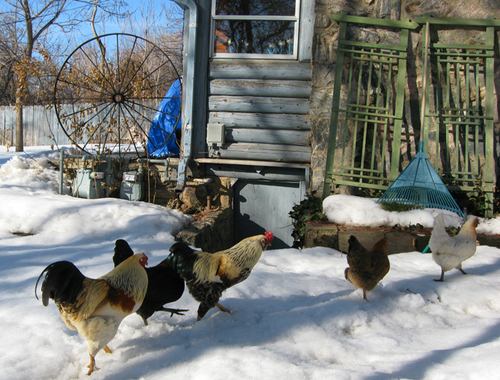 My Aunt Reta's roosters follow her hens, heading back to the barn.

After a whirlwind US visit, Jean-Marc and I owe many "remerciements" to those who organized, hosted, chauffeured, and flew us over (thanks again, Sandy!). Thanks also to those who took time out of their days to meet with us at the various wine/word events. Merci beaucoup! I will soon post photos from our trip.

We've just returned home from our two-week west coast "wine and word" tour, or "tourbillon".* To the tune of tapping and tchatching* (home renovation and friendly "builder banter" continue just outside my window) I try to find composure and closure.

Seated before a blank computer screen, I am unsure about how to summarize our sentimental Stateside séjour.* The dizziness returns and, with it, an endless surface to distill and so reduce in size. With much to ponder, and even more to pierce, I wonder where to begin? Seattle, Portland, San Francisco, Los Angeles, Phoenix... there Jean-Marc and I found 400 fellow Francophiles before fast-forwarding to Layton, Utah, where we had the chance to bask in the brilliance of my grandmother's smile.

My grandmother's smile brings us back to whirlwinds and surfaces: the one symbolizes a bustling brevity, the other, a Lord-willing longevity. Having exchanged hundreds of hellos, there now remained one gut-wrenching goodbye. The tour and the bonjours now behind us, we were about to listen
to what seemed to be another's last rites.

After so many bustling and brief bonjours with readers on the West Coast, we found ourselves, Jean-Marc and I, bowed over my bed-ridden grand-mère's* side. There, I listened to Cheryl, a Hospice-issued spiritual advisor, who read John 14 as I fought the urge to correct, point out, or clarify the surreal state that was my grandmother's and that is Everyman's impending fate. "You know," I had the mind to say, "my grandmother's last breath is not for you to speculate!"

Instead, the serenity on the speaker's and heaven-seeker's faces silenced all fear and, in fear's place, the room was filled with grace. There at Aunt Reta's guest house, where my grandmother has spent ten happy years thanks to the care of her first daughter, Uncle Rusty, Aunt Betty and the newest members of my Franco-American family gathered around Grandma Audrey. As the Hospice worker read in English, my children's French ears translated:

And then the time came to say adieu.* Though told to do so, I did not say goodbye to my grandmother. "I'm heading back to France," I said, unintentionally kissing her soft lips after she had turned away a hollow and boney cheek and puckered up for dignity's sake. 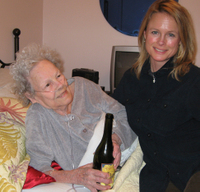 "I will call you when I get home," I promised. Her hopeful eyes fixed on mine, and I continued: "My favorite story of yours is that one about the bed bugs. I really enjoyed hearing it again. Do you have another story for me?" I begged. Grandma said that she did. In fact, it was all coming back to her now... "Good," I said, pushing aside her blue-tinted tresses and kissing her on her firm forehead.

Faster than doubt, I left the room, unwilling to wonder about whether the words whirling in my wake would be our last.

~~~~~~~~~~French film & more, in Shopping~~~~~~~~~~~
The Red Balloon. Newly restored and available for the first time on DVD, Albert Lamorisse s exquisite The Red Balloon remains one of the most beloved children's films of all time. In this deceptively simple, nearly wordless tale, a young boy discovers a stray balloon, which seems to have a mind of its own, on the streets of Paris. The two become inseparable, yet the world s harsh realities finally interfere. With its glorious palette and allegorical purity, the Academy Award winning The Red Balloon has enchanted movie lovers, young and old, for generations.

Organize your inner-francophile with these Parisian themed nesting cases.
Brie Cheese wheel - imported from France.
Limoges Bowling Pin Box : Collectors and aficionados alike covet the whimsical porcelain pieces created by the artisans of Limoges. Handcrafted in the same painstaking manner since the 18th century, these miniature boxes will delight you with their vibrant, intricate details.