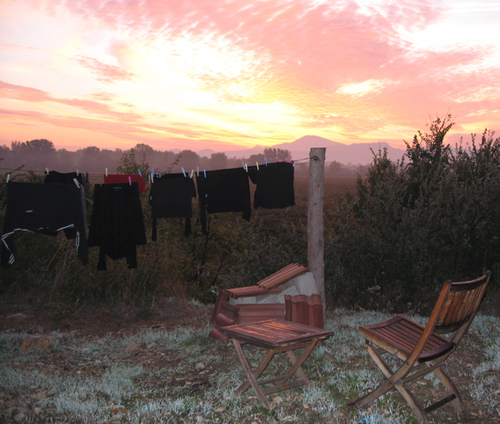 Listen to the French word "brûler" in the following quote: Download bruler.mp3 Download bruler.wav
Au travail, le plus difficile, c'est d'allumer la petite lampe du cerveau. Après, ça brûle tout seul. / At work, the most difficult thing is to light the little lamp of the brain. After, it burns on its own. --Jules Renard

Vintage French Interiors: A veritable treasure trove of ideas for French-inspired interiors culled from the most creative antiques shops across France.
.

Disorienting it was, the sight of my husband FEEDING the flames that crackled and spat not twenty meters from our own cracked and on-the-mend mas.*

Who? What? Where? Quand?* Yes, that's it: When! I looked at the clock, 6 a.m., and remembered the date. According to Uncle Jacques* we had only a few more days legally to set fire to part of our property. "If you want to burn that heap," Jacques cautioned, recalling the growing pile of renovation scraps, "you'd better do it this week!"

Waving from a window-balcony, I called out to my husband, who darted to and fro, containing the flames lest they up... and go! "Everything okay?" I questioned.
"Don't worry," Jean-Marc replied, pitching another section of Old Chicken Wire Fence onto the flaming heap. "The wind is blowing in the right direction today."

I guessed that that depended. The "right direction" was somewhat subjective. My eyes shot over to two wooden poles, three lines of cord connecting them. "I'd like to keep my clothesline!" I reminded him. Just last week Jean-Marc admitted that the étendoir,* standing only five meters from the fiery pile, might not be spared.

Nowadays, it is the ordinary "preuves d'amour"* that fuel the fire at this wife's core. I watched as my husband rigged the garden hose to the clothesline after water-logging one of its wooden poles. "There, it won't burn now," he said. And in one thoughtful geste,* he put my mind to rest.