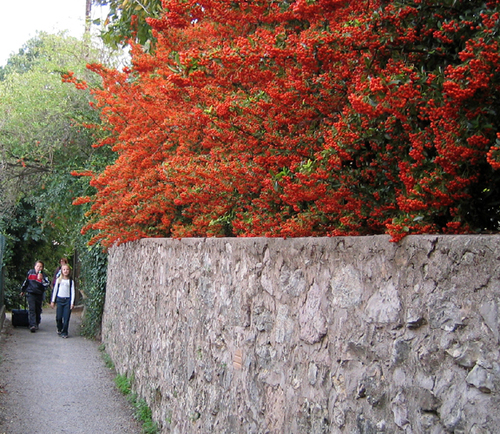 Pyracantha over a Provençale stone wall in Les Arcs-Sur-Argens... and Max and Jackie on their way home from school. Coucou, les enfants!

A DAY IN A FRENCH LIFE

If only greetings were, as the French say, simple comme bonjour. It takes me many a hem-n-haw moment, staring at the computer screen, to decide just how to greet someone in an email. Isn't "Bonjour" a bit predictable? Why not spice things up with "Salut!"? Or, better yet, "Coucou!"? On second thought, "Hey there!" might be too informal when emailing someone for the first time....

"Cher." Now there's a start! "Cher" (or "Chère) is a perfectly respectable way of greeting a fellow internaut. Though the "cher" salutational might be somewhat stuffy or overly sentimental--it's safe!

The bad news is, there just isn't much to choose from on the Gallic Greetings Menu. With so many ways to say "goodbye," you'd think there'd be more ways to say "Hi!" Would we be stretching things to include "Allô!" to our list? (Allô is more of a question than a salutation. Besides, its usage is reserved for telephoning.)
.
THE CHEAT-GREET
So sometimes I cheat-greet. That is, I refer to the sender's mél... to see how they began their letter. I'm always surprised to see that it began with "Bonjour." So simple... Why didn't I think of it? Well, as my husband sometimes says to me, "Why be simple when you can be complicated?"

Because Complicated is my middle name, which brings us to word order: first, middle, and last. Just where does one squeeze in one's French greeting? After all, those French are known to re-arrange word order, foiling us language learners every time! So why should a "simple bonjour" be any different?

The answer is, of course, that the cart goes before the horse, so that we, for example, "Salut Simone" and not the other way around (one doesn't write "Simone Salut", does one?). One could argue that in the second case we are, effectively, doing the "Simone Salut," or saying a ceremonious "hello" to our dear friend, Simone... so why the big deal about word order?

REBONJOUR
When one is behind the horse AND the cart, that is, when the greeter has already passed by with his greeting, only to return again (like when you are writing for the second time in one day to the same address), that leaves us with the wonderfully original "Rebonjour." Hot diggety dog! One more precious entrée on our French Greeting Menu. Few and far between are the occasions for me to feel superior, so the least I can do is feel slightly smug when pointing out (if only to Self) that the email sender, who already wrote me this morning, is writing  again--but with an ultra-gaffeuse "hi"! In France, one doesn't repeat-greet (or say "Bonjour" two times in one day). One "Rebonjours". (Rebonjour, Simone!)

Finally, some people leave out that salutatory "something" altogether. Take my husband, for example. When emailing me, he never writes "bonjour," "salut," or even "hiya". And forget "Chère"! He doesn't use my first name either, as others unkeen on two- and three-word greetings might. He simply calls me....

(Attendez un moment, you don't really expect me to share Jean-Marc's term of endearment for me, do you? After all, there are limits to even online journals.)

Bon, time to sign off... Now do we end with au revoir? or à bientôt? or how about amicalement?  There are just so many ways to say goodbye in French! 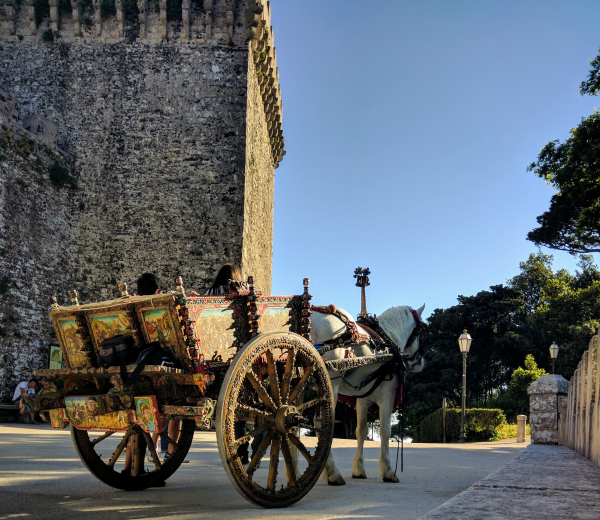