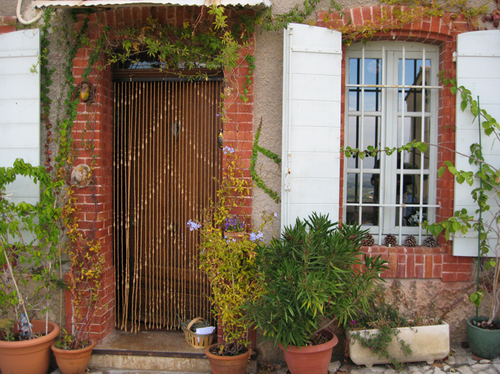 A beaded door screen of sorts ... or of sorted beads!

La nécessité est l'écran mis entre Dieu et nous pour que nous puissions être. C'est à nous de percer l'écran pour cesser d'être. Necessity is the screen set between God and us so that we can be. It is for us to pierce through the screen so that we cease to be.
--Simone Weil, French philosopher, author of Gravity and Grace

Week-ends are a mixed blessing for those who do not have to go to work. You wake up to the delicious reality that there is "no rush." But the reality is short-lived. There may be no haste, but what about waste? The pressure is still on to do something industrious before the week-end slips away.

Social engagements aside, there's always housework or grocery shopping to do. But who wants to set the tone for a relaxing week-end via the head-deadening drone of the vacuum? And why leave the house only to join hordes of shoppers? That leaves the internet. But what kind of wool-between-her-ears woman would while away her week-end on the World Wide Web?

"Good morning, Max," I say, as my son wanders over to my desk, where I am sipping and surfing, getting my morning caffeine and ezine fix before the "house" wakes up. I don't like my son to see me this way : "collée à l'ordi" or "glued to the computer" as my daughter would complain. Because it is the week-end, I cannot argue back about its being my job--this sticky business of working from home.

Over the phone last week, my grandmother continued her list of mea culpas, including the confession that she needed cigarettes and coffee (an hour before the household began to stir) in order to face four children and a hectic day. She must be referring to the pre-dawn, perfectly-independent-of-others "Mommy Hour". And while her screen was made of smoke and nicotine, mine is made up of HTML and requires electricity for "steam". My grandmother used her smoke screen to let her day filter in gently, lest it overwhelm and defeat her before the caffeinated courage kicked in. Je peux comprendre.*

I've got mea culpas of my own: guilt over not parceling out my day in a more productive, pleasing-to-all way. Lying in my grandmother's arms last month, my head over her heart, I, too, confessed: to being forty and still so far from faultlessness. Life seemed a series of stumblings. Get up. Trip. Get up again.
Trip again. No wonder some of us need a morning net through which to filter life--if only the screen could catch us!

While my grandmother can no longer drink coffee or smoke, soothing to her now is that screen or filter known as Faith, through which life's trials pass gently... and often with the pull of a helping hand: I reach out for my son's. "I'd love to join you for a morning walk!" I say to Max, who responds with a smile even in his eyes.

I don't want lazy weekends--or life itself--to slip by. Forget industrious or independent, perhaps it is with others that time is best spent. Dependency or, rather, interdependency, has its place. More than caffeine, nicotine or even a computer screen, some of us can no longer function without another's help. Just as I had wheeled my grandmother from her bed to the bathroom, my own son "wheeled" me out of my Saturday morning rut... to where life is vibrant and very near full bloom.
.

Paris Umbrella : the beautiful design will put a swing in your step whether you're singing in the rain or sheltering your skin from the sun!

In Video Games: Travelogue 360:
Paris holds something new for each of its visitors. It's up to you to discover these new places and share them with the world! As a writer on assignment for Travelogue 360 magazine, you'll explore the city and its renowned landmarks, for hidden gems waiting to be discovered. Locate items hidden in 3-Dimensional views of the Eiffel Tower, down the Champs Elysees, under the Arc d'Triomphe, and others of Paris' most beloved landmarks. Find your own Paris in this incredible voyage.
.
In French Music: "Motifs" by Paris Combo.With a sound made up of equal parts bossa nova and classic chanson transported almost unchanged from the 1960s, plus American jazz, Argentinean Tango, bal musette and the Manouche swing made famous by Django Reinhardt, Paris Combo undeniably personifies that city's aesthetic. --Christina Roden
.