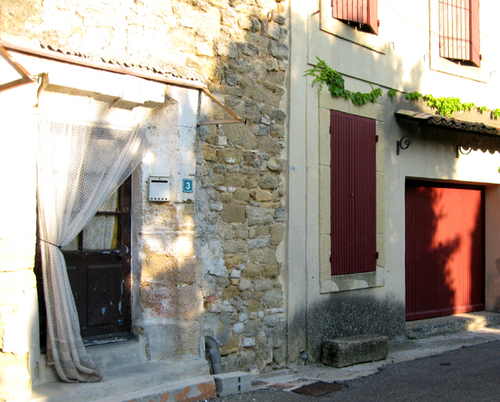 Curtained doors and French charm in the village of Serignan

If you happen to be in the Big Apple next month, then let's meet at Crawford Doyle Booksellers, a small store located around the corner from the Metropolitan Museum between 81st and 82nd Streets on Madison Ave. I'll be there, perusing the stacks, on April 15th, from 4:00 to 6:00. RSVP here.
.
futé (foo-tay) adjective
sharp, smart, astute, crafty

une petite futée = a sharp little thing, a clever one
.

On Saturday night, I got to thinking about tagines. Specifically, if we were set to eat Tagine Chicken, then how come our hostess just placed a bright-red Dutch oven in the center of the table? Back to thinking out of the box ... or cone....

Aurore, our hostess, explained: "Tagine, simply, is the name for Moroccan stew. But you don't need a tagine to cook a ragout. Any slow-simmering pot will do!"

Aurore's breezy reply matched her style: witty, warm, and improviste;* a style she's been perfecting ever since marrying Alain, the quick-to-criticize "cook". You might say Aurore and Alain are the French version of "The Honeymooners"*. He's Ralph, she's Alice. He's the wise-cracker, she's the clever counter-attacker.

While seated next to Isabelle, discussing language, I kept my ear partly tuned to our hosts' playful banter. "Carrots!" Alain remarked, of his wife's simple entrée. "Darling, carrots will render you agreeable!" she countered, citing a famous French dicton.* Aurore had a witty comeback for every one of Alain's teasing criticisms. And though many of the French-language subtleties eluded me, I could appreciate Aurore's character. But, how to describe it in a word?

Meantime, Isabelle and I, seated in the couple's crossfire, were discussing the French word "futé".* While Isabelle tried to explain its meaning, Alain launched another playful vexation. On hearing his wife's witty retort, I looked over to Isabelle. "Futé... I get it!" I said, impressed with our hostess's endless repartee, thoughtful words not to be confined to a box, let alone a culinary cone.

Get yourself a tagine! - read the rave reviews here.

A must read: "Cooking at the Kasbah: Recipes from My Moroccan Kitchen" by Kitty Morse