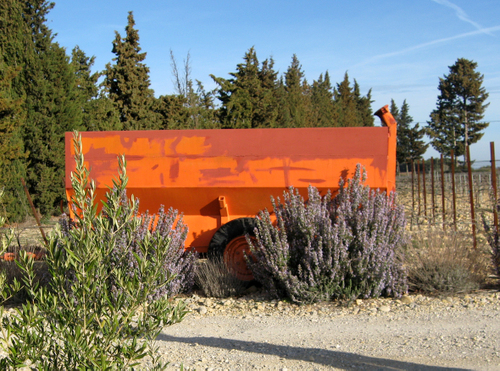 Olive, rosemary and the colors of pre-Spring (the wagon could use a finished coat...).

Plus un gars flambe dans la victoire, plus il a peur de la défaite.
The more a guy is carried away in victory, the more he is afraid of failure. --Michel Novak

Because Jean-Marc and I traveled the west coast alone, I missed many of my children's impressions of the United States during our last visit "home".

Returning to my sister's house, where the kids had spent the first week absorbing America in their own French way, I asked Max and Jackie to sum up their thoughts on my native country's culture. That's when two sets of shoulders flew up. Either the kids were unimpressed...or were finding it difficult to summarize some sort of sensory excess.

I pressed the kids for a clue... for any old impression, of my fellow countrymen or our star-spangled nation.
"The stores are too big," Jackie offered.
"But you LOVE to shop!" I argued.
"Yes," Max explained, seconding his sister. "But in all those stores there's just more of the same." I might have pointed out that those checkered slip-on Vans he now wore on his feet were not bought in some frou-frou French boutique.

"Is that all? Don't you have anything else to say? A question maybe?" "Yes," Max answered. In fact he had a few...
"Why, in France, don't we have eggs, waffles, and bacon for breakfast, too? And what does it mean, when they say 'dude'?"

My brother-in-law, Doug, who had spent the week cooking and entertaining the kids, answered the first question after quizzing me about what I feed them for breakfast (traditional French morning fare, I admitted: confiture with toast au beurre*).

"You DO have eggs, bacon, and waffles in France!" Doug pointed out, blowing the breakfast whistle on me. "Just ask your mom to make them for you!"

As for the second question, I doubt the kids picked up the term from my brother-in-law (who, I believe, is more of a "hey guy" than a "hey dude" type) and they didn't hear it from me. Also, I doubt they got it out of the dictionary* where:

Back in France now, the rush is on to catch up with laundry, email, and Restauration Hell. To complicate matters, I now have two enlightened enfants* -- newbie epicureans who've requested that bacon and a waffle iron be added to the grocery list. To this, I have an enlightening response: Dudes, this American mom will be sticking to boutique breakfasts. Forget dragging out a big frying pan at 7 a.m. In France, we eat small!