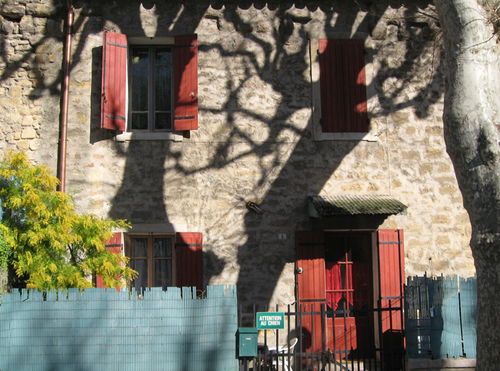 The bright flowerettes of a mimosa steal the spotlight from a beat-up blue fence in the town of Camaret.

April in New York City. Jean-Marc and I will be in NYC on April 15th & 16th. We'd love to meet you. Click here for more information on our wine-tasting event.

The word "oublieux" comes from the verb "oublier" (to forget). "Oublieux de" means "quick to forget" (a kind deed, for example) as well as "neglectful of" (something).

The plan for today, remember, was to republish that list of "(under) 50 Ways to Say Goodbye in French." Only, on whiling away the early morning at the breakfast table, eating leftovers from the kids' plates and polishing off the last scrap of toast while ignoring the barking beggar* at my knee, it occurred to me that I might've neglected to think about something....

Moments later, after scouring my computer archives to retrieve last year's "French Goodbyes" post, I realized that I had already republished the list... just a few weeks ago. Mince!* How could I have forgotten? Now what to do?

Well, why not begin by fretting about amnesia? And wouldn't this be a good time to have a midlife crisis? Why not get that "crise de la quarantaine"* over with already? At least I'd be ahead on *something,* and not behind, like behind this foggy wall of forgetfulness.

(And now, A Conversation Between You and Me...)

"Amnesia?" you say. "We could have told you that! The ipso facto vérité* is: you've forgotten several things this past month! What about that Recipe Poll* you had us all involved in, promising to "bake, burn, or blog" about the results? And those pictures you were going to post from your lah-di-dah "US Tour"?

"You're getting off-topic!" you protest.
No, I'm just getting distracted again!
"Well, try to pay attention!" you suggest. "...But, out of curiosity and, now that you've mentioned it, just what *is* the one word for um, uh, er?"
Oh, glad you asked! It's "Euh!"
"How enlightening!" you say, unconvincingly. "Now on with the program!"

Oh, dear. Amnestic confusion would explain things... or the repetitiveness associated with, you know, repeating things. I mean, the repetitiveness associated with memory loss. As in "Did I already tell you that?" Case in point: forgetfulness beautifully explains the origin of the popular expression "bye-bye"! Proving, wouldn't you agree, that I am not the only one who repeats herself!

Before I forget, here's that list. I've freshened it up a tad or a "toot" with the French equivalent of "toodeloo!"... Don't miss it, here.
.

In February 1918, a derelict soldier was discovered wandering the railway station in Lyon, France. With no memory of his name or past, no identifying possessions or marks, the soldier given the name Anthelme Mangin was sent to an asylum for the insane. When the authorities advertised his image in an attempt to locate his family, hundreds of relatives sought to claim him as the father, son, husband, or brother who never returned from the front. Read The Living Unknown Soldier.