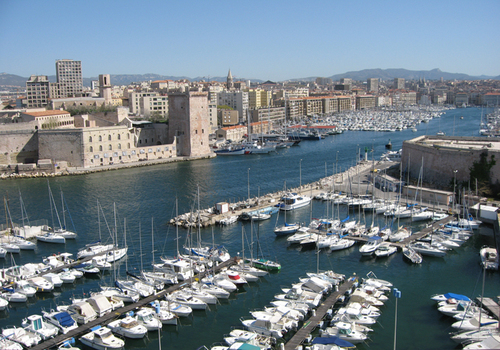 The deep blue port of Marseilles, where we spent the weekend touting Rouge-Bleu wine.

...now we know where the words "shhh! not one peep out of you!" come from.

This week I am experimenting with Twitter,* a "social messaging utility" (or micro blogging service) where the user, or "tweeterer," *continually* answers one simple question : "What are you doing?"

If you read my recent essay on "forgetfulness," then "tweeting" may seem an obvious solution to this one's attention-deficit disorder. However, the updates (or "tweets," in Twitter lingo) that I'll post are not only for me... but also for those armchair travelers ("twavelers"?) who wish to stay connected to this French life... in real time.

To receive the updates, or "twupdates," here from the wine farm, just go to the right-hand column, half-way down this page, where you'll find my (thrice-daily) "Twitter Updates".

Not sure if such "tweeting" will add quality (or chaos!) to the French Word-A-Day twog (that's "blog" in Twitterese)... I guess the only way to find out is to "twy".

Downing Street (The official twitter channel for the Prime Minister's Office based at 10 Downing Street.) http://twitter.com/DowningStreet


~~~~~~~~~Shopping~~~~~~~~~~~~~~
Diorshow Mascara: super volumizing, lengthening, and curling mascara
Mistral soap : a best-seller! Hand-crafted in the heart of Provence, and made according to a three-hundred year old tradition
"Ville de Paris" & "Service des Egouts" written on these replica Paris Cufflinks
Fleur de Sel. Gathered from the salt beds of Camargue, this subtly flavored salt will add burst of flavor to your food.