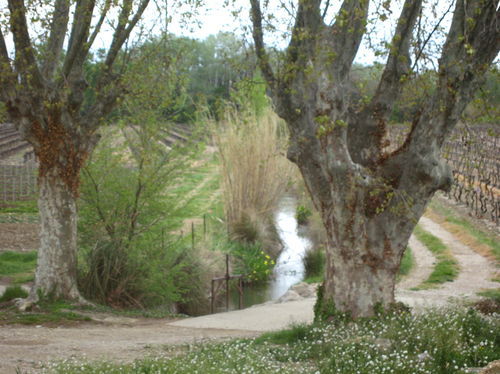 A babbling brook... and babbling villagers in today's story.

Note: French Word-A-Day will be on break, sort of, through April 18th. Meanwhile, I will try to send an update on our "Wine/Words" trip. Wish us luck... and speedy recovery... and thanks for your support! Check our schedule, here.

My head is like a farmyard. When I call the hen ideas to give them seeds, it's the duck, geese, or turkey ideas that rush up. --Jules Renard

When a cigogne* flew past his second-story office window, Jean-Marc reported the exciting event to me. I raced toward the fenêtre* in time to witness a streak of red, white, and blue smoke. The Patrouille de France* had just jetted past. I hadn't realized they went by any other name....

Did it follow the tri-colored cloud of smoke of those French Acrobatic airplanes? More importantly, to whom was that heavy-jowled stork delivering? Just which amorous villager was to be the lucky recipient of the baby?!

Finding out the answer took a bit longer than maternity-ward labor, but we eventually heard the scoop (not so difficult in small town, where "tout le monde sait tout sur tout").*

It was David, another local winemaker,* who blabbed the blushing truth--and in a roundabout way:

Well, Can can all right, or could, I supposed... Turns out that the stork had been carrying EIGHT of Can's babies inside its beak! No wonder I never saw it fly by... By the time I'd arrived at the window, the heavy-jowled bird had done a tailspin -- and landed "pile poil"* in the middle of the brook!

There, beyond a trio of platane* trees, we watched rippling water hit the banks of the stream where showy yellow irises "of the marais"* cluster this time of year.

"We call them canetons,* since the female duck is a 'cane'." David explained, correcting my "Can". I studied Mr. Greenneck (and was that a cigar in his smiling beak?) as he and the missus swam, heads held high, quietly down the brook, eight little quacking fluff balls trailing behind. Proud parents.
.

Tune Up Your French: Top 10 Ways to Improve Your Spoken French