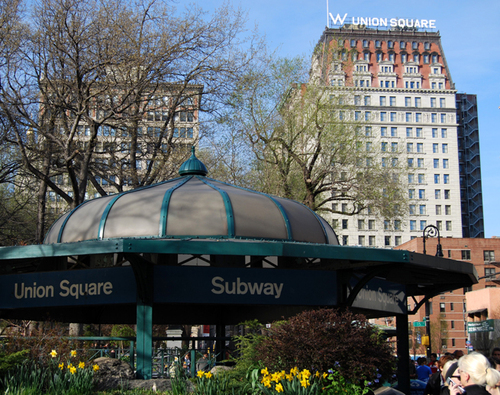 At Union Square Wine and Spirits* in New York City, Tom took good care of us, ensuring our "Wine & Words" event got off to a good start. The tables were dressed with crisp linen, premium wine glasses, felt tip pens, Rouge-Bleu* order forms, and a central "stage" for the Franco-American speakers (that'd be Jean-Marc and me).

"You can stack your books there," Tom explained, pointing to an empty section on the pretty table. How thoughtful... only, I didn't have any books to sell... after bungling my own book delivery. At Tom's suggestion, I walked across the square, to Barnes and Noble, to purchase the one remaining copy of "Words in a French Life."

When I returned, a few guests had begun filtering into the wine store. I took up my post, there behind the well-dressed table, separated from my "audience" via a starched white cloth, spotless wine glasses, and one lonely book-on-display. The set up seemed a bit formal and, now that there were no books to sign, what was the point? Wouldn't it be friendlier, plus chaleureuse* I wondered, to be on the other side of the starched barrier? Quickly, I made my way around the display table, to begin greeting guests. This way, I reasoned, everyone would feel cozy and "at home". To boot, I would enjoy the warmth of mixing with the crowd instead of being separated from it.

I soon realized my mistake. With a room full of people, it would be difficult to speak with each and every guest... unless ... unless conversation was cut superficially short. I failed at each attempt to "mix" as my eyes abruptly disengaged from my guest's, to pre-greet the person standing nearby before the guest's wait got too long and leaving became an option. The gesture was sloppy, impersonal, and left me feeling more like an inexperienced politician than an inexperienced author.

Nervously, I asked guests: "have we corresponded before?" and "what is your email address?" in a desperate attempt to recognize a long-time, virtual friend. But the warmth and invitingness that had been permitted by a focused email was lost on a growing crowd. Frustration grew as I could not concentrate, let alone carry on a meaningful conversation. If I felt the let-down, what must the others have felt?

One of the guests offered a solution. "You'll need to learn the art of the two minute conversation," he said, sympathetically. If only there were time for a mini-course in mingling!

"It's kind of like speed-dating" another attendee mused, before his voice trailed off (in disappointment?). "I won't keep you any longer," he added, "it looks like you have others who are waiting to speak to you."

And while the reality of having a room full of people waiting to speak to oneself ought to have been a good feeling, oozing with validation and "you've-finally-come-homeness," instead performance anxiety set in. As if performance had any place in personal human relations. Only, how to be natural when inside a voice is urging, "Next!" "Move-on!" "People have fought traffic, arranged to leave work early, arrived bearing gifts... to speak to SOCIALLY-INEPT you!"?

It is the impersonal part of an "author event" that leaves me uncertain about the future (or at least future book-signings!). More than speed-dating, I would have loved to wine and dine each and every person who took time out of their day and money out of their pocket in order to come out and see a newbie author.

I left the event feeling something like ashamed. There was a palpable build-up on my skin: the grime of "letting others down". A sentiment Jean-Marc could relate to, after his own hometown wine-tasting event last month, in Marseilles. Agonizing after having "small talked" with long lost friends from his childhood, friends who had come to support him only to receive a frenzied "salut" when a crowd began to circle round and devour the new winemaker... Jean-Marc found it impossible to reunite--let alone reminisce with his guests in Marseilles. Feeling awful, he spent the next day calling friends and apologizing for not being able to "catch up" with each and every one.

...That's it!, I thought, I'll contact everyone too! But the next morning, while firing up the computer, an email took the wind out of my redeeming sails:

Dear Kristin,
I came back home last night and my children asked me how the book signing event was. I told them that unfortunately it was disappointed as I didn't get a chance to talk to the author.

"As a professional writer for last 30 years, mom has been always nice to my readers. I shouldn't have a babysitter and miss your homework to go to this event."
Sincerely,
Y.
*     *    *

Realizing one's dream of finding an enthusiastic audience is turning out to be a mixed blessing. Maybe it is time for a new dream? I'd better rule out speed-dating, though. How about speed-forgetting? That way, one person's disappointment might cease to torment an already tortured newbie author's soul.

Better yet: speed-reading. (I'm thinking of one of the gifts that I received at the event (thanks, Marina!) about not taking things personally. The book* talks about agreements and so, I wonder, can we make one now? That's right, you and me. Here goes: I won't take things personally if you don't. Now can we get back to our warm and cozy (necessarily online) relationship?

Finally, and in case I haven't told you lately, thank you for your support, understanding, and encouragement during one writer's growing pains. Without you, I could not continue to "pen" these bite-sized pieces of Provence, slices of French life, or grits from the Gaul.