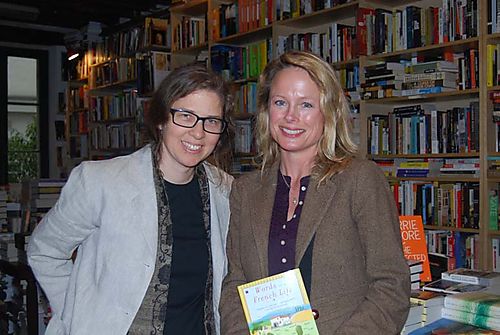 Me (right) with Penelope Le Masson from the Red Wheelbarrow Bookstore in Paris.

It happened on the rue Saint-Paul, on a rainy weekday in the Marais.* That frightening feeling was back as I was stopped before a bookstore, its windows chock full of English titles. My aunt and my uncle stood beside me, admiring the vesty vitrine,* where the smart book jackets drew us close enough to the shop window to leave our breathy marks. The sign over the door read: "The Red Wheelbarrow Bookstore".*

The words were delivered forth from out my mouth like orders, commands issuing out of that part of consciousness colored not by feeling, controlled not by phobia, conflicted not by fear. Oh, but the kicking!

One year ago, that same "inner officer" issued similar instructions: Stop into Shakespeare & Company, it commanded. Check to see that they have your book in stock. Without further ceremony, I was dismissed by The Voice, but not before it barked one last order--and this, with a kick in the pants. "En avant!* it thundered.

Heart thumping, palms perspiring, I did as I was told. My mission was made milder by the spontaneous support of a stranger (just moments before, in a nearby cafe, I had met a young American tourist. "Deb" was her name, and on that sunny spring day she would all but hoist me over her shoulders and into the
historic librairie,* going almost as far as to announce me as Her Holiness, the author of .... uh, the AUTHOR of... (here, my new fan and supporter paused, turned from the bookshop assistant, and discreetly ask me--once again--just what was the name of this literary opus that we were building up?).

Though I had been able to walk into that shop on my own two feet, walking out was another matter: a matter of all fours. The book was unknown and the author, unheard of. Like that, Her Holiness disappeared into a puddle of perspiration on the trottoir* just outside the sensational store. (Having taken such pity on me, Deb went on to work for Habitat for Humanity.)

One year later, and my heart was playing table tennis once again. The story was the same, albeit the trottoir was different....

"I should stop in to this bookstore," I repeated, looking up at the charming sign which was cordial and inviting. Just then, my uncle mentioned that he wanted to check out a nearby pastry shop... Taking that as a bad omen, I almost followed him into the patisserie* to fill up on puff pastries stuffed with eau-de-vie.*

Instead, I obeyed those orders issued from the irascible initiator inside of me. My aunt followed me into the shop and I noticed her lips were moving, though I couldn't hear was she was saying. I was on a mission buoyed forth by a thumping heart, the noise of which drowned out all sound.

More than a happy ending, you might say this story has a beginning. Read Meg's take on our bookstore encounter, over at the Red Wheelbarrow blog. And mille mercis to her, and to Penelope LeMasson* for the warm welcome that they offer all of us booklovers.
http://rwbooks.blogspot.com/2008/05/lovely-afternoon-surprise.html 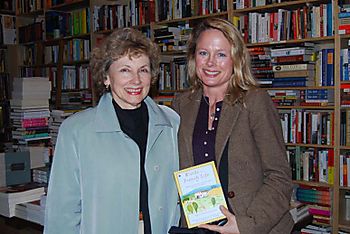 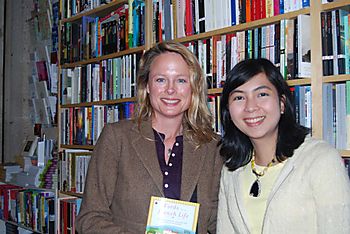