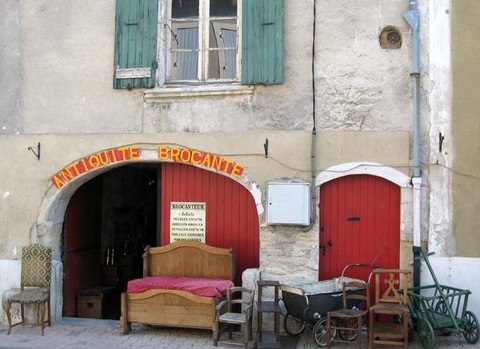 A lot of huile de coude will go into polishing up these guys, in Saint-Maurice-Sur-Eygues

Did you know: the French use more than their elbows to work up a good idiom... they use their wrists and arms, too! Synonyms to "huile de coude" include "huile de bras" (arm oil) and "huile de poignet" (wrist oil).

A second cup of coffee was not going to arrange the jumble of nerve endings that was mine last Sunday morning. Looking around the house, instead of Calm, I saw only Choses-A-Faire!*

Choses-A-Faire and Things-To-Do are two most unwelcome weekend guests, especially on Sunday, a supposed day of rest. I set down the coffee pot and handed my cup to Jean-Marc, who appeared to be in the same nervy predicament as I: tired and on edge. Over-commitment and clutter once again conspired to steal the present moment.

After exchanging a few preliminary snips, snaps, and TAKE THAT'S!, it dawned on me that we had some powerful energy for hire and why waste it in the kitchen when we had two flower beds that needed weeding? Rather than picking on each other, we might pick on dandelions, foxtails, and crabby crabgrass instead!

In the minutes that followed, we exchanged our boxing gloves for garden gants,* put down our pride, picked up pioches,* and set aside just enough righteousness in time to wield a rake.

We said our apologies indirectly, of course...

Me: (backing into Jean-Marc with my wheelbarrow...) Oh... Sorry!
Jean-Marc: Désolé, chérie* (after launching an eyes-wide-with-terror escargot* into the air--missing me by a snail's breath!--only to be reminded that we don't sling snails, we SET them down somewhere else).

By the end of the morning the hippy happy rose hips* were heureuse* and the waist-high weeds were woebegone. "Take that!" I said, pitching another bunch of the mauvaises-herbes* into the wheelbarrow. In their place, sweet-scented flowers now stretched out their once-bundled branches. Ahhhh...

As for our own bundled branches of nerves, good old fashioned elbow grease* did the trick once again.

In French music: French Playground, a musical rendez-vous of fun French and French Creole songs that will delight children of all ages.