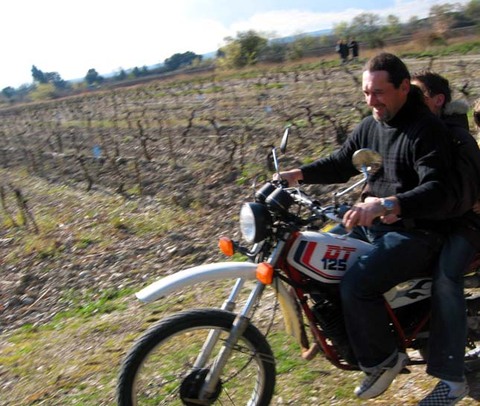 My brother-in-law, Jacques, a.k.a. "Marcel". Find out why in the following story...

*     *     *
Check out the Word-A-Day widget and add a little French to your own blog, desktop, or social networking site (Facebook, MySpace, Orkut...): http://www.widgetbox.com/widget/french-word-a-day

I have a new nickname for my brother-in-law and it rhymes with "ink well", "story to tell," and even "sheep's bell" (three concepts, by the way, that a certain Provençal "word painter," who holds the same name, knew so well).

Speaking of word painting (or "the art of writing"), though my  brother-in-law may feel more at home on a motorcycle, "Man of Letters" is a jacket he tried on this past weekend when he put aside his leather riding veste* and picked up a plume.* Perhaps those familiar handlebars served as an écritoire?* ...though you wouldn't know it from his neat handwriting, which, like sheep's bells and ink wells, is rather swell. This brings us back to the name that I've been calling my beau-frère lately, and that'd be.... "Marcel".*

Good news: The book "Lonely Planet Provence" lists "Words in a French Life" as essential reading! Thank you for ordering a copy of either book.

Spotted in France: A Dog's Life...On the Road

Moleskin Paris Notebook: "The future is unwritten. Take up your pen and shape it."