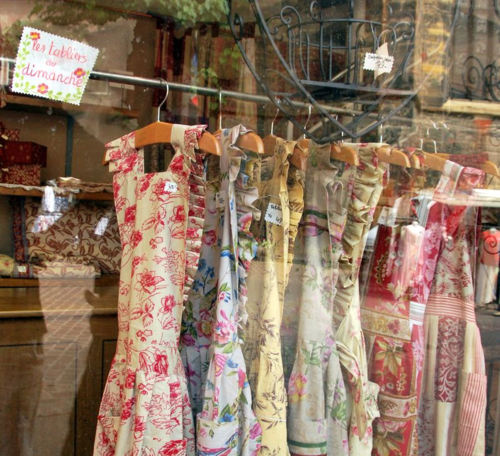 Here's the French definition from the "Dictionnaire de l'Académie française" :

While every other French person was out collecting bouquets of muguet* yesterday, Aunt Marie-Françoise had thyme on her hands, or rather, *in* them....

As it happened, we were on another fragrant stroll, breathing in the acrid, buttery scent of rosemary, the licoricey sweetness of genêt,* and plenty of pungent, musky earth after rainfall.
"Thyme... rosemary... only thing missing is sarriette!"* Marie-Françoise lamented, referring to the batch of herbes de Provence* that she could've whipped up for us had we some wild sarriette to choose from... and a coffee grinder. Tant pis!*

We continued to gather the thyme for tea, or "tea time" if you like, given that the wild garriguian* herb doubles as a cough reliever. Though I didn't have a cold, I did have plenty of fever, standing there before a hill of herbs, eager to refill that empty jar of homemade spice mix that Marie-Françoise keeps stocked for us.

Determined, I put one foot at either side of a budding shrub, fixed my hands around its base (as one would a rope), and attempted to "lift off"... and so take the plant with me using some form of anti-gravity, I know not which.

But nothing budged and the plant, literally, held its ground. Having a second go, I wrestled with the stubborn shrub, this time using the weight of my body to hoist the hell-bent herb out of the ground. My body now at a sharp incline and partly suspended at one end (but for the root holding me down at the other), the only thing I managed to uproot were the curious eyes of Jean-Marc's aunt.

Marie-Françoise paused from her own herb gathering, looked up casually, and offered a suggestion. "You need only bend the little branches, she said, snapping off another delicate tige*, adding it to a growing bouquet. That way the plant is left to flourish year after year....

(This far into the essay, and I still haven't managed to introduce the word of the day: tablier. So let's end things here, with only one tiny regret: had we one of those frilly, flowery, oh-so-feminine tablier-frocks, we might've carried back with us, in our gathered aprons, a bit more medicinal thyme. Speaking of frilly,
flowery, and frou-frou, Aunt Marie Francoise tells me that *those* kinds of aprons are a phenomenon of style. Read her story, in French, and learn about the authentic aprons of yesteryear and their not-so-ordinary uses. Click here: http://french-word-a-day.typepad.com/tablier.pdf .

The Apron Book: Making, Wearing, and Sharing a Bit of Cloth and Comfort
A Is for Apron: 25 Fresh & Flirty Designs 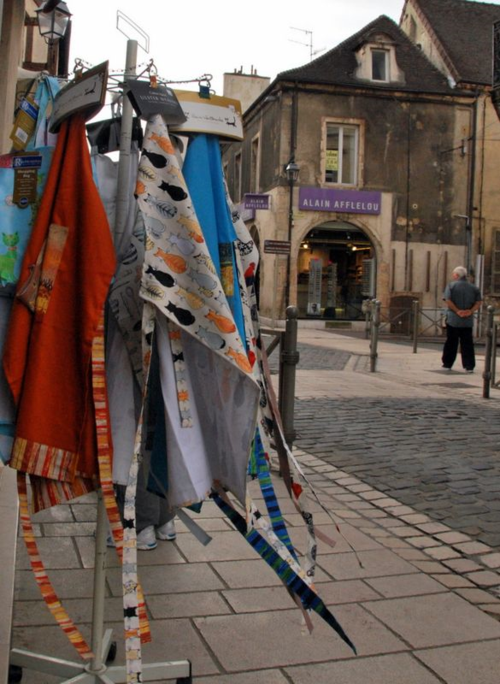 Aprons for sale in Alsace... 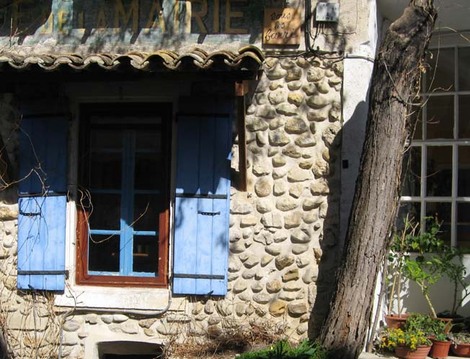 Betcha a tablier-wearer lives here... quaint and charming as it is.

Urban Crayon Paris: The City Guide for Parents with Children