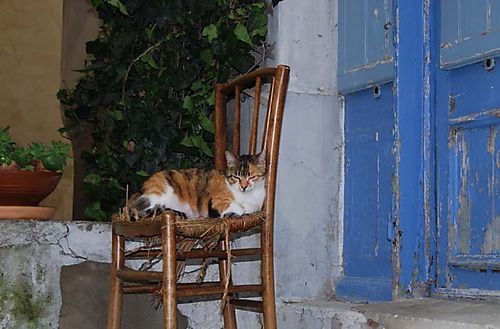 "Threadbare" chair + free front porch: The economics of napping, in the southern French town of Sablet.

épargner quelque chose à quelqu'un = to spare someone something

This post was to be titled "Domestic Dimanche,"* that is, until I tallied up my day spent basking in bucolic bliss... and realized how it all added up to good business! (Remember Benjamin Franklin's "Un sou épargné est un sou gagné"?*) Now to find an economy of words to share this sou*-saving story....

>> Cheap Thalassotherapy <<
Sunday began with a bike ride out to the Aygues River. Pedalling feverishly, following in my daughter's tire tracks (with thoughts of cool water carroting us forward), I zigzagged along the pebbles and dirt path. Once in the river, holding hands with my little girl, I waded over to some river "steps" (not exactly a waterfall) to recline on a mossy rocher*--dos à l'eau*--and let rushing water drum therapeutically against my out-of-whack lower back. Ahhhh.

<< "Teak Oil" for Cheap "Goils" >>
Fresh from the river regime, I felt relaxed enough to take on a nagging DIY project: the refinishing of our picnic table. Forget teak oil--which can cost an arm and a wooden leg--instead I took Aunt Marie-Françoise's advice... and used a hands-on kitchen remedy: regular ol' salad oil. "Any kind'll do, the cheaper the better". I chose a French favorite (ISIO 4) for its "omégas essentiels"* and its cell-renewing abilities mentioned on the front label. "What's good for the body," I reasoned with a toast, "is good for the bois!"* Not fifteen minutes later, turning my relaxed back on our newly bronzed beauty, I shook the can of
oil: just enough left to revive my mother-in-law's ten-day-old tapenade. Miam miam!*

>> Frugal Freshness <<
After lunch, I headed to the washing machine.... Truth be told, I don't usually look both ways before hanging my laundry on the clothesline.... but this was no ordinary clothesline... This was a line of rosemary bushes! What would the neighbors (their window shutters at a slight peep) think? I'd been meaning to try out Monsieur Farjon's "tumble-dry tip" ever since he gave me all of those botanical cuttings. When last he came to visit, he pointed to the rosemary shrubs that line our driveway. "You can hang your linens there," he said simply, matter-of-factly, of another era-ly. He mentioned the disinfecting qualities of the romarin* (here, I tried not to be offended) and the great scent that would infuse my linens after they literally steamed themselves dry, flung out over rosemary, beneath the sizzling summer sky.

Finally, all this Provençal penny pinching was not lost on me... for I figure my neighbors were let in on the savings spree... Think about the free entertainment!: the knee-slapping comedy that was one impressionable American decking the driveway shrubs with wintry white sheets, frantically pinning the flapping edges to the swaying rosemary tufts.