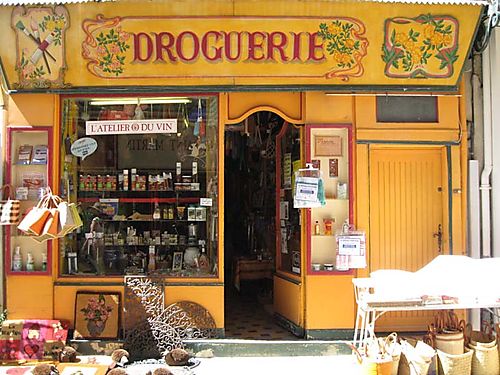 Not many medicinal plants in here... but you'll find some in today's story, below. Photo taken In the town of Orange 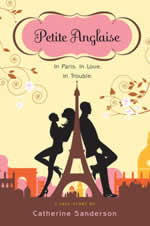 I really enjoyed the book Petite Anglaise: In Love. In Paris. In Trouble. If you love France and have ever dreamed of moving to the Hexagon, then you might like  reading about how one "Petite Anglaise" followed her Francophile urgings and, rucksack on her back, traveled into the country, gradually built her nest... and once and for all unpacked.


foliole (fol-ee-ol) noun, feminine
leaflet, one in a number of tiny leaves

...and, there seems to be a matching verb, "folioter", which means "to number
the "feuilles" or pages in a book": to paginate (synonym = feuilleter).

He brought me exotic acanthus, its flowery gray and white "tail" trailing from a plastic sac... Looking inside, I saw more wild plants: chardon,* bourrache,* marrubium, and something he'd sub-labeled "Paris Fog". I peered deeper into the bag's recesses, my fingers pushing through the herbal jungle. There was fennel, "patience," "pastel," and mélisse....* The leafy list went on and on.

I could not identify what I was looking at but listened to Monsieur's explanations, which he delivered almost as an apology. I would observe, eventually and first hand, how he was forever excusing himself for the knowledge which he wore like a thorny crown, there, above a beautiful botanical mind. His gift or "don" as he called it, was passed down from his grandfather, a paysan* like himself, and a man he never chanced to know. And while Monsieur could identify hundreds of plants growing in Provence, and even tell you their name in Provençal, he insisted that the information did not interest others these days. "People prefer to sit in bars, drink beer, and play the lottery."

As Monsieur spoke to me I realized, with glee, that I no longer sat in bars, drank beer, or played the lottery... and I hope that'd somehow count me in as "interested party".

This conversation took place on Portalet street, a peripheric road running round our village center. I had been close to dozing as I sat behind the fold-out table that doubled as an author's booth, while book fair traffic filed past.... That's when Monsieur strode up in a freshly pressed shirt, appropriately the color of asparagus, sack in hand. I'd seen him earlier that day when I thanked him for the information that he had given me regarding a certain fleur rustique,* one I had been eyeing on every French curb and in every rock garden.

There I now stood, beneath the giant plane trees, unrolling stalks, leaves, and different plant "breeds," carefully setting aside the humid newspaper which Monsieur had used to keep the botanicals fresh. Inside, each wet wrapping, beside a stem or a stalk, I found a hand-written explanation, in pre-war penmanship, authored by my septuagenarian friend.

"This one you can eat"... he offered. "Like spinach." I looked at the little brown foliole* leaves, no bigger than tears, and wondered how to prepare them for the palate? The scribbled note read "Patience Officinale" (a.k.a. "Monk's rhubarb"). Hmmm.... pie! "I think I saw this growing in our vineyard," I realized, excitedly.

I studied the handwritten notes, some included anecdotes. "Acanthe molle," the first one had read. There were definitions and trivia, too, like this one for the acanthus: "Emblème des sculpteurs, artistes... Symbolise l'amour des arts.... sa feuille ressemble à une patte d'ours..."* I glanced over at the plant's leaves. Sure enough, they looked like bear paws to me.... The note continued: "With these, the Greek sculptor Callimaque (Callimachus) decorated the Corinthian columns in the Roman temples. The church (here) in Sainte Cécile is decorated with them...." I made a mental note to waltz over to our town's chapel and look for "bear paws" inside.

Next, I carefully rewrapped the plants, some medicinal, some ornamental, some edible... all for which I was thankful. But how to express such gratitude? Why not begin with an appropriate French verb (perhaps "planter")? And why not make up a flower name to offer in return?

And so, like that, I planted a "Calico Kiss" there on Monsieur's cheek, right over the blushing redness.

*     *     *
P.S.: Here's a book I just ordered: "Of People and Plants: The Autobiography of Europe's Most Celebrated Healer" ...not sure how it will read, though I did get the thumbs up from Monsieur, who has the same book in French.

The scent of Provence: Sauvage Fenouil Candle by Diptyque

Words in a French Life: Lessons in Love and Language from the South of France