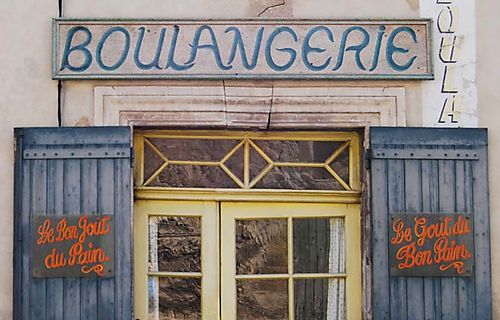 A bakery in the town of Camaret sur Aigues, in the heart of Provence.

Urban Crayon Paris: The City Guide for Parents with Children


A Day in a French Life... by Kristin Espinasse
(We Three: my daughter, my mom, and I)

At ten-years-old:
I liked motorcycles and baseball.
My daughter likes mascara and karaoke.

We both loved swimming...

I liked to wake up at the crack of dawn.
She loves to sleep in late.

I loved frogs.
She likes ladybugs.

I was round.
She's a stick.

I ate tacos.
She eats tapenade.

When I lied, my face turned crimson.
When she lies, hers turns convincing.

I collected desert wildflowers and gave them to the neighbors.
Jackie fancies bamboo, has a carnivorous plant, and is giving in other ways.

I was once called a bible beater and went and hid.
She got called "Blond!" once and was livid.

My daughter speaks in French and in English.
I spoke in English and in Tongues.

She has a godmother and a godfather.
I had a mafia of angels.

Jackie's table trick is to eat the eyes right out of the fish on her plate. She
learned this from her great-grandmother, a French woman who survived WWII. My trick was a disappearing act involving any food placed in front of me (except fish eyes). I learned this from my American grandmother, an excellent cook, who smoked her morning cigarette in the trailer's "salon" and called everyone "Hon".

Jackie's mom has healthcare and a mutual.
My own mom had a mutual agreement with my sister and me: what you say is what you get and whatever you say Don't Say You're Sick!

When my mom got mad at a man, she moved on, took her kids with her.
When Jackie's mom gets mad at her man, she throws (virtual) plates, then meditates.

Jackie's mom is over-serious, over-sensitive, and over-anxious.
My own mom was over-generous and, sometimes, over-the-top.

Mom let me dig up the back yard once. "What the hell, let her make a pool."
Jackie's mom is a control freak, doesn't cuss.

I had a sister who was prettier than I.
Jackie looks like her.

At my daughter's age, I once started a fire in the field behind our trailer park, almost making homeless our neighbors, mostly retirees. I admitted this to Jackie (on confiscating a lighter!), who wanted to know whether I ever told my parents. (Mom, Dad: are you reading?)

I had a crush on Doug Pearson from kindergarten through eighth grade. He had dimples, or fossettes, and did a mean impression of Gene Simmons: fake blood, black eye-liner, and all.
Jackie's heart is faithful to horses: four-legged rock-stars each and every one.

I automatically pledged allegiance to the flag.
My daughter questions whether Sarkozy will keep his promises.

Jackie and her mom wear the same shoe size: 7.5
My own mom is one size smaller, though she is larger than life.

I was a real softie, though my daughter is really not so tough as she thinks she is. (Perhaps we are not so different after all?) And, every once in a while, I catch myself following in my mom's leopard-patterned, untamed tracks. Secretly, it comes as a relief: to free-up the over-serious, under-the-countertop, once carefree fille.*

I wrote a similar hommage to my son in "Words in a French Life" (see the chapter "Enfance").

12 DOUX Soaps in a Jar : Hand-crafted, one at a time, in a tiny family-owned soap factory in the South of France, DOUX soaps are milled FOUR times for an unbelievably creamy, luscious bathing experience. Following techniques passed through generations, the soaps are then formed into perfect ovals using a
100-year-old mold

Specialty of Aix-en-Provence since the XVth century, the Calisson consists of almonds and candied fruit mixed together in a smooth paste, covered with royal icing.