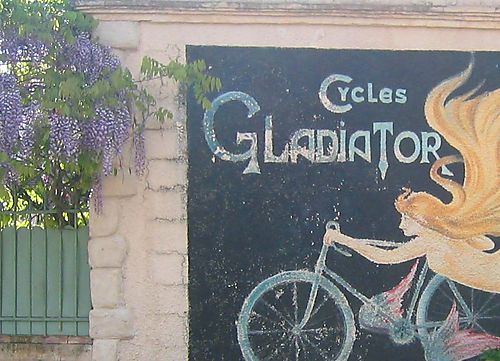 I am letting go of the handlebars today... and letting someone else write the story du jour. Enjoy Cerèlle Bolon's memories, in today's column

As I type these words, I hear the whistle of a cricket just outside an open window ... where the insect's song hijacks a cool morning breeze to steal into this quiet writing room and so assert summertime.

This fresh minty morning, with its lackadaisical "cricketing," counterbalances so much caffeine, suggesting a new rhythm. Why not slow down this summer?

...why not let go of the reins of rigidity, throw one's arms up in the air and latch on to the coattails of cricket song? Why not follow that beatnik breeze -- its balmy kiss still wet on my cheek?

Today, I pass the writing reins to a French Word reader... and writer from my hometown of Phoenix, Arizona. Enjoy Cerélle Bolon's essay. As for me, toodloo, I've got some catching up with Cricri* to do.

1959
As a Mademoiselle Magazine Guest Editor, one is asked to list three well known individuals one would like to meet and interview.  What an opportunity!   I knew it was unlikely that I would be able to meet the people I had in mind, but why not give it a try!?

My first choice was Frank Lloyd Wright.... ( Click here to read the rest of this story...)

In French film: "Love Me Tonight" with Maurice Chevalier


~~~~~~~~~~~~~~~~~~~~~Books~~~~~~~~~~~~~~~~~~~~~~~~
Easy French Reader begins with the adventures of two friends, an American and a Parisian, as they learn about their respective cultures. This is followed by readings on the history of France, from ancient Gaul to the present. The final section features four abridged short stories by famous French authors.

Quiet Days in Clichy by Henry Miller
This tender and nostalgic work dates from the same period as Tropic of Cancer (1934). It is a celebration of love, art, and the Bohemian life at a time when the world was simpler and slower, and Miller an obscure, penniless young writer in Paris. Whether discussing the early days of his long friendship with Alfred Perles or his escapades at the Club Melody brothel, in Quiet Days in Clichy Miller describes a period that would shape his entire life and oeuvre.