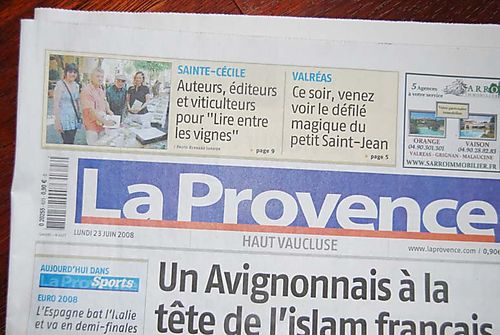 Front cover of today's paper (that's me, on the right, holding a book)

At "Lire Entre les Vignes" the first wine and words fair in my hometown of Sainte Cécile, the author, editor, and winemaker participants were professional and prepared: armed with posters, brochures, catalogues and muchos merchandise they decorated and stocked their stands.

Here's a run-down on my debutante day amid the pros:

Arrived two hours early to check out my "booth" (the end section of a very long table, the rest of which was reserved for the local winemakers).

Studied my new and exotic pen name (an innocent misspelling of my prénom*) which the fair organizers* taped to the fold-out table, indicating my placement.

Populated my "domain" with all of five book copies for sale; stared at the empty countertop space and wondered how to cleverly fill in the "blanks". Maybe I could sit on the edge of the table instead of behind it? That'd sure take up space.

Erected a laminated mini poster with a book blurb from the 2006 Simon and Schuster catalogue. Spent the day repositioning the poster after it blew over, time and again, landing in my lap, with each passing breeze.

Got my chair stolen when I wandered over to the buffet to sample some lunch.

Stole the chair from the French editor to my right.

Played with my neighbor's wine aroma discovery kit (those winemakers sure know how to reel in the traffic) sniffing the various sample jars and trying to guess between thyme, rosemary, mint, fleur d'oranger...) when traffic waned.

Convinced self that self was really just here to make contacts, that book-selling was not "l'idée du jeu"*.

Did a "troc" or "trade" with winemaker Elisabeth Plantevin - exchanging one book for three generous packets of hand-picked rose trémière* seeds. (Score!)

Shrugged in agreement with René, the editor from "Editions Grandir" when he pointed out that wine sells better than books, "n'est-ce pas?" Oui.

Admitted to René that it was I who stole his chair earlier.

Devised a plan to "serve words" at the next book fair: could hand out non-alcoholic French verbs and sparkling adjectives in fluted glasses...

Finally met Judith "with the blue shutters": the American to whom the villagers have been trying to introduce me, going as far as to give me directions to her house "avec les volets bleus". Hope she'll come and visit me "with the white shutters" sometime soon.

Jumped for joy, literally, when a group of enthusiastic American tourists stopped by my booth for autographs. (Never mind that they are friends* of mine).

Invented quirky "compromise sales of your own book" tactic number three by recommending somebody else's book* entirely... this, to said group of American tourists (after getting caught inhaling pages of
"Petite Anglaise"* while hidden behind the book's hardbound cover).

Sold two books (hurray!): one to a German wine salesman, another to an Australian wine journalist. Decided that male wine workers buy books, even if their clients don't.

Learned (from the Australian man) the French word for "redneck": péquenaud. (This, after I pronounced the English word "better" as "beDDer". Chalked it off to 13 years of trailer park parlotte*.)

Shook Monsieur le Maire's hand, a little too enthusiastically, before traipsing off to the toilets to hide.

Met Sonia (new in town, from Senegal). Recruited a few passers-by for Sonia's English lessons. Wondered why I myself wasn't giving English lessons after learning how lucrative they are... in comparison to authoring books....

Got interviewed by three journalists (score, score, score!): two French,* one Australian (the "redneck" guy; this interview will take place at a later date, giving me time to tidy up my péquenaude American accent).

Got sun burnt when my booth was not profiting from the shade of the plane trees, furthering my redneck reputation.

Chatted up the town botanical genius, Monsieur Farjon, who returned to my stand at the end of the day with a surprise.... Stay tuned. 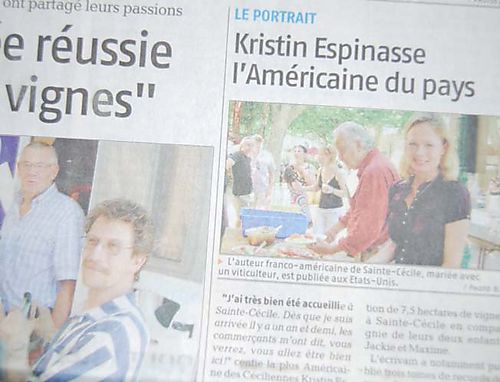 ("Portrait of an American" in this morning's paper--and that's our mayor, far left.)

~~~~~~~~~~~~~~Shopping~~~~~~~~~~~~~~~~~~~~
The practical and very neat Provendi revolving soap fixtures have adorned public school washrooms throughout France for years. Now they're turning up in the most chic places. Lightly scented, vegetable-based 300g soaps snap (new style) or bolt (original) on to the chrome-plated bracket rod and rotate with the motion of the hands.

A virtual miniature confiserie, the "Flavors of Provence" tin includes all of the specialties of the house, in individually-wrapped tasting sizes.