"Lexique" + a botanical glossary of plants in Provence 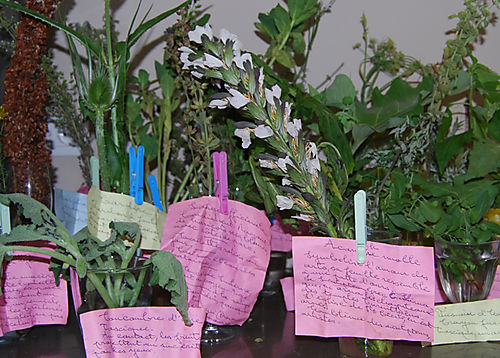 What do you do when a plant savant gives you two dozen botanical cuttings? You speed home from the village, dart out to the clothesline, and grab all the clothespins you can get, run back into the kitchen and scour the armoire for glasses (champagne flutes, wine goblets, old jam jars...)... then you carefully label each and every species (thanks to the handwritten notes that one venerable Frenchman carefully penned).

Monsieur Farjon talks about plants as some talk about humans. They have their relations, c'est-à-dire,* they have families, "ancestors". They reproduce. They are "born": some as bâtards, others with silver spoons in their botanical bouches.* Speaking of mouths, they even have body parts, such as "armpits" (aisselles), from which thirsty French birds drink à la "cabaret des oiseaux".*

They have their faults and their moods, good and bad. Ornery they are, as witnessed by their spiky "skin" or prickly "peau". Their many "fingers" cling to you like children... when they aren't altogether sticking their tongues out, teasingly. And they are liable to spit as you mosey on by, minding your own onions, in some abandoned French village.... (Just ask my own mom, who stood beside me, stunned, as one alien-like concombre d'âne* squirted at us in the ancient hilltop village of Le Cannet des Maures.)

Plants teach us, scold us, and reward us. Some are smelly, some sweet, but they all merit more than a passing glance and to most, Farjon would argue, we owe a sincere reconnaissance* ... or one final salute -- as more and more of these medieval plants are disappearing, concrete pushing up in their place. Gone are the flocks and animals that, in their own humble way, nourished these "old folks": these sometime irascible, often irresistible botanicals of prehistoric and modern Provence.

It is another kind of green that interests people these days, Farjon laments. Money and modernity would seem to have taken the limelight off of botanical antiquity. But that won't stop one "plant whisperer" from combing the countryside, to render a daily homage to his heroic heirlooms.

Here is the most recent batch of botanical cuttings that Monsieur Farjon brought by in a mid-summer medley. There are stories, funny and sad, behind each and every one. I hope to share some of them with you, as Monsieur Farjon has with me so as to keep their French histories alive, for posterity.

Note: The plants are listed in French, sometimes in Latin, in English and, here and there in Provençal (as indicated by parenthesis). In this glossary, I have included some undefined terms which I will try to clean up petit à petit.

Bibliography by Monsieur Farjon
While many of these books (in French) can be found at Amazon, most are rare or a bit pricey. Look for them in your local library.

"Of People and Plants: The Autobiography of Europe's Most Celebrated Healer" by Maurice Mességué