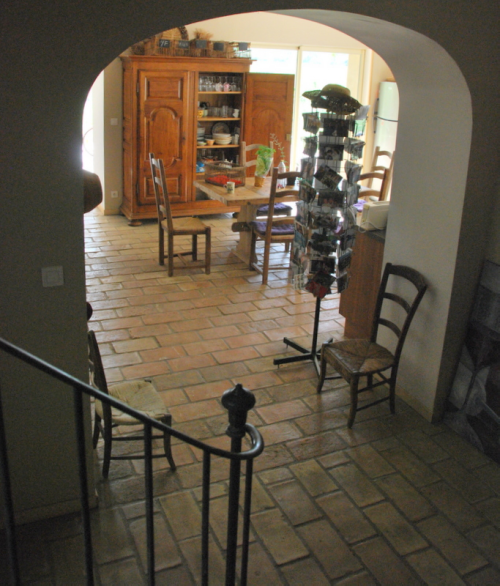 Home sweet home, where today's story begins... Note: today's word is more in theme with Part 2 of the following story (I ran out of time and didn't get to finish it. So consider today's word a hint! Will it be definition 1 or definition 2 that defines the end of the story? Stay tuned...)

1. (soûler quelqu'un) to get somebody drunk
2. to drive somebody crazy

When we finally agreed to turn over our home to our son for his first all-night party, I had the idea to appoint my husband as chaperone. After all, there would be une trentaine de copains to keep an eye on—not to mention furniture and dogs to protect!

I felt guilty about skipping out on the watchman duty, until I remembered that I’m the one who always stays behind with the kids while Jean-Marc travels for business 4 weeks a year. Dieu le sait I’ve had my share of catastrophes to handle, solo; it was Jean-Marc’s turn to babysit the home—and to chaperone!

Casanière to a fault, it is rare that I venture out on my own. What better time to do so than now, when our quiet haven would be transformed into a thundering all night disco? Besides, there was no use in three of us suffering a sleepless night. (I could steal Jackie away with me, making this a mère-fille getaway!)

To seal the deal, I threw in a bonus: If Jean-Marc would agree to watch the property—and keep 30 teenage revelers in line—I’d make sure his ears were protected from those blaring speakers by buying him a trusty pair of boules Quiès at the pharmacy!

With or without earplugs, Jean-Marc agreed to hold down the fort, and on June 2nd I woke early, made him his tea and set about doing as much of the party preparations as possible before Jackie and I hightailed it off the property after lunch. Only, our mother-daughter departure was delayed when the accidental chaperone began to suffer a sudden case of volunteer’s remorse!

"Do you have to leave already?” Jean-Marc complained. “What's the hurry—the party doesn't start until 8 pm!"

Clearly, Jean-Marc was experiencing the first pangs of resentment. Eh ben, tant pis pour lui! He had already accepted the position of damage controller and agreed to suffer the nightshift duty! Plans were plans, and mine had been made in advance! I jealously went over in my mind my mother-daughter weekend agenda, reinforcing my intentions, lest our getaway plans be further threatened!

If all went well, Jackie and I would check in to the economical IBIS motel by 2 pm. There was a lap pool sur place and a mall within walking distance—we wouldn't spend any more money than necessary, after all there would be the motel to pay for, but we could certainly faire du lèche-vitrines at the various boutiques. Then, we would stroll back to the motel for a swim, this after a nap and before an early dinner (just a few healthy snacks we’d pick-up at the supermarket), after which we'd tuck in early—one of us with a good book and the other with reality TV (an exception could be made!). What a mini-vacation this would be! Only, décidément, some of us were now feeling a little left out, maybe even deceived!

I studied our unenthusiastic chaperone.

"But I have done all I can for the party!" I pointed out. Indeed, there was nothing else to do but fight the urge to control the behavior of the few teens who had already arrived. Ces derniers were busy barbecuing their lunch, shirtless and hatless beneath the burning noonday sun!

“You all need sunscreen and casquettes!” I had already told Max, discreetly calling him away from his circle of copains.

I had hoped to spare the boys—and their two dozen soon-to-arrive friends—of this kind of party-dampering mothering. Jean-Marc was most certainly the man for the job! It is he who would find the good and natural balance between freedom and damage control.

Well, so he wasn’t happy about my early departure. Tough luck! I would just have to stick to my guns, and ignore this unexpected resistance on his part.

My decision was firm. I looked the unwitting chaperone directly in the eyes. Quickly grabbing my overnight bag, I blurted a hasty au revoir.

I had no idea just how soon that would be….

ces derniers = these last ones 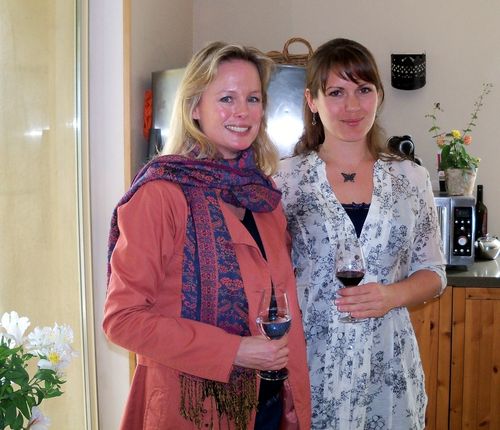 Chief Grape was away during one of our wine-tastings, so I asked Caroline, friend, vigneronne, and wine-maker, to help host the May 22nd tasting. Caroline is from Perth, Australia, and now lives nearby in Orange. 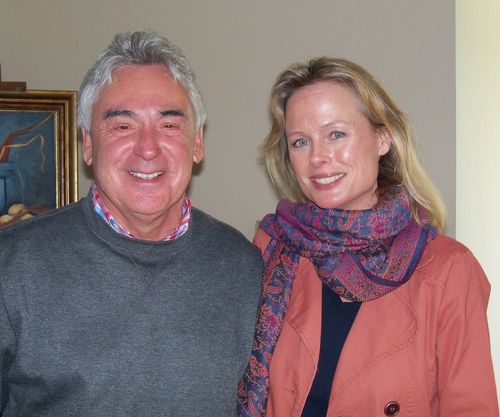 (Photo by Peter Bissell.) Here is Jacques Morin, who sent the first two photos and who says he uses the book Words in a French Life for his French classes at Blue Ridge Community College, in Flat Rock, North Carolina, and that the book has been a great tool for language learning (hint-hint-hint!). Thanks so much, Jacques! I hope other teachers will consider one of the books for their classes, too (more hints!)! 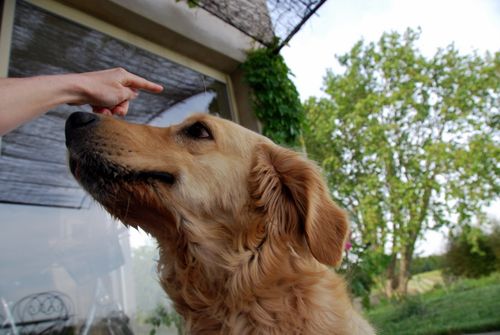 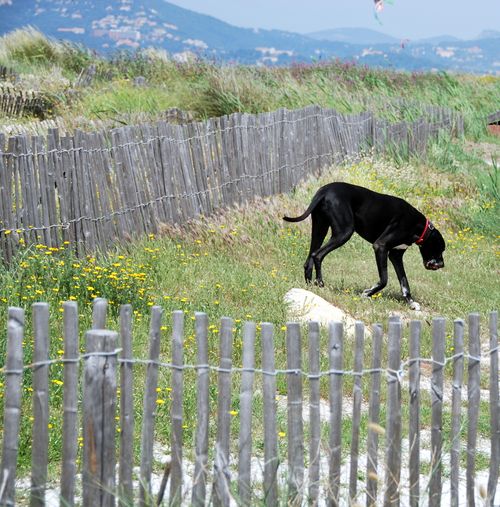 Do dogs sulk? This is "Ulysse", or Ulysses, who lives on a beach near Hyérès. You can see a good photo of him here (you'll also see a story featuring my Mom. Don't miss it.)

: to sulk, to give someone the cold-shoulder, to feel sorry for oneself

bouder la nourriture = to not eat, to have no appetite
bouder quelqu'un ou quelque chose = to refuse to have anything to do with someone or something

Audio File: (note: all Francophones in the house are away today--at school and at work... so you are stuck with me again. Listen, at your own risk!, to the following sound file):  Download MP3 or Wave file

La reine va bouder le mariage du prince.
The queen will not have anything to do with the prince's wedding.

Yikes, cutting very close, today, to this edition's deadline! I've spent the morning rewriting the "bouder" story for the upcoming (it will come up, won't it?) story collection "Vignettes from the Var".

For those who would like to proofread the story, thanks for clicking here! I promise not to boude or bouder, no matter how many corrections you send in!

P.S. good news: Blossoming in Provence will soon be available on Kindle (Thanks, TLC Graphics!). Next, we'll see about Nook! 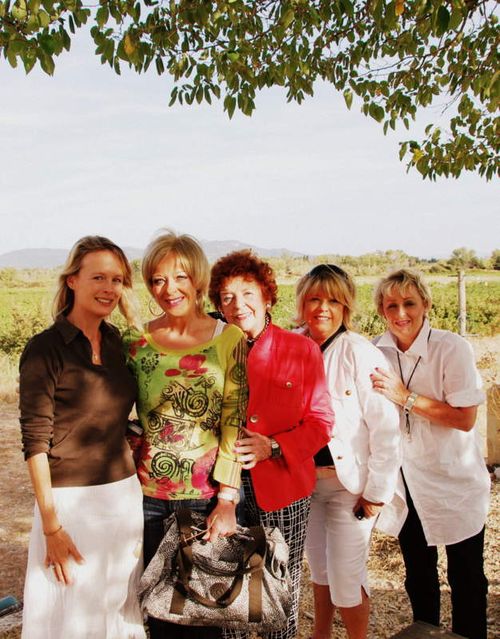 No sulkers here! Just a lovely group of joie-de-vivres who visited us in 2009. To my right: Peggy, Marcella, Kathie, and Debbie. Hi, ladies. I hope you are doing well! 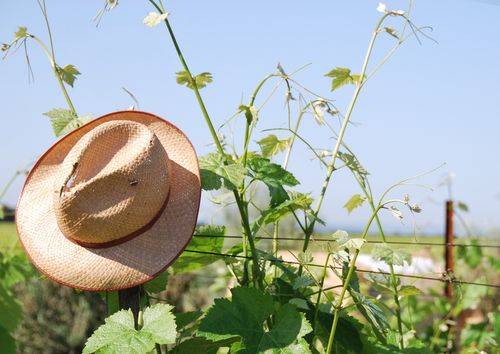 In other happenings: the wine-tastings here at Domaine Rouge-Bleu continue! Read Tony's blog in which he talks about his visit with us! 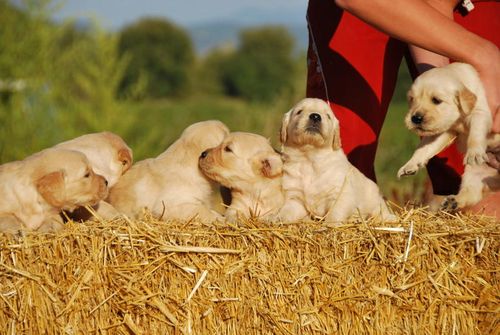 Smokey and his 5 sisters. Photo taken in September, 2009. To comment on any of these photos, click here.

Happy weekend to all and thanks for forwarding today's post to a friend who might enjoy it.