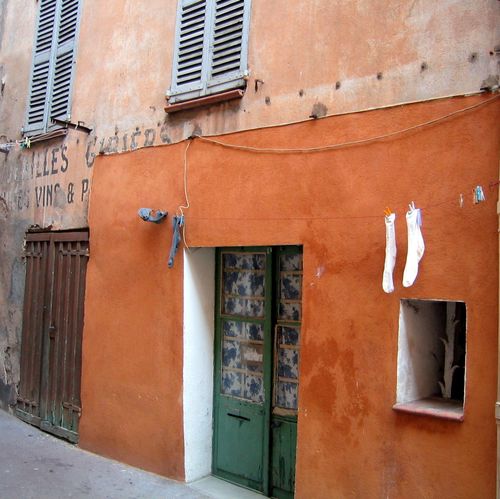 In a spur-of-the-moment decision, I chose this picture (taken in our former hometown of Les Arcs-sur-Argens) for today's post. I noticed, only afterwards, how serendipidous it was for one of the socks to be posed "au pied levé, or "foot on the rise".

: impromptu, spur-of-the-moment (literally, a decision made "in mid-step", or au pied levé)

I don't like spur-of-the-moment decisions! I tell my kids and my husband, who specialize in catching me off guard. They have learned to slip their requests into the chaos of the moment, when I'm so dumbed over with whatever is before me (a juicy telephone conversation, a mesmerizing piece of pie, a fascinating documentary), that a "YES!" is almost guaranteed. Qu'est-ce qu'ils sont malins!

It is only after I have agreed to take my daughter and her friend to the mall because "Maman, s'il te plaît!! This is the very last day of les soldes!!" that it dawns on me I'm scheduled to be at the vet's at the very same time—across town, in the opposite direction. Squeezing two stinky dogs and two dolled-up girls into the car—only to race in opposite directions—I swear to myself never again! Plus jamais!

Never again will you see my car peeling out of the mall parking lot, the woman in the driver's seat frantically waving goodbye as two teens walk off—oblivious to the car, to the woman, and to the two dogs whose furry claws are clutching the bumper, beneath which wheels are spinning as a harried mom tries to make it to her original appointment.

J'ai appris la leçon. Nowadays, my spur-of-the-moment answer is non! Don't even ask me now—not until I've gotten off the phone, not until I've finished the pie, not until I'm done watching Nos enfants nous accuseront.* Only then can I have a look at my calendar.

But when my best friend Susan emailed two days ago with a spur-of-the-moment can't-refuse proposition, I forgot all about my stickler rule that would save even a slow-footed casanière from overbooking!

Voilà le hic! The trick now will be for this homebody to be in two places at once: both on that Rhône waterways cruise ship headed toward Lyon—and here on the olive farm, on picking day... when some 50 volunteers are scheduled to show up, ladders and baskets in hand!

Post note: Jean-Marc has encouraged me to go on the week-long river cruise with a long-time friend I see once every few years—and not to feel too guilty about missing the day-long olive harvest, which sort of doubled (guilt, guilt) as une crémaillère, or house-warming party.

What would you have done?

*Thanks, Maryn McKenna, for recommending the must-see French documentary "Our Children Will One Day Accuse Us" . Jean-Marc's eyes were glued to the screen, as he kept murmuring we have to show this to our kids! (so that they'll make informed food choices!)

Watch it here, now (if you are reading via email, simply click over to the French Word-A-Day blog, via this link). Do not miss this film about what French children are eating, even in those most pure "untouched" villages! Side note: the scenes in this film, of the French countryside are breathtaking.

Thanks for visiting our sponsors:

Hotels in France. Visit EasyToBook.com to find the cheapest hotels in almost all France cities. 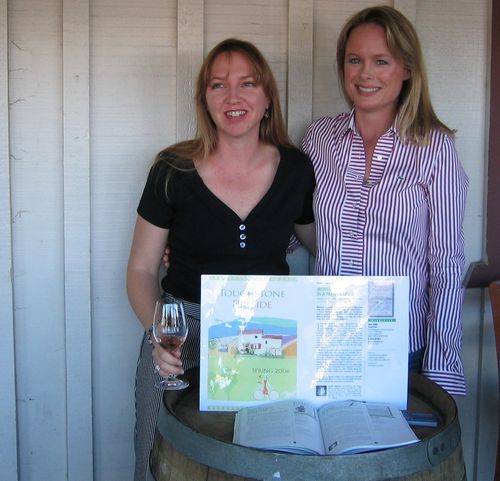 The woman on the left, with the wine glass, can kill me on Thursday for posting this photo—taken 7 years ago (about as often as I see her). See ya on the 8th, Susan! Be there or be square! Elephant tears and all! To comment on any item in this edition, click here to reach the comments box.