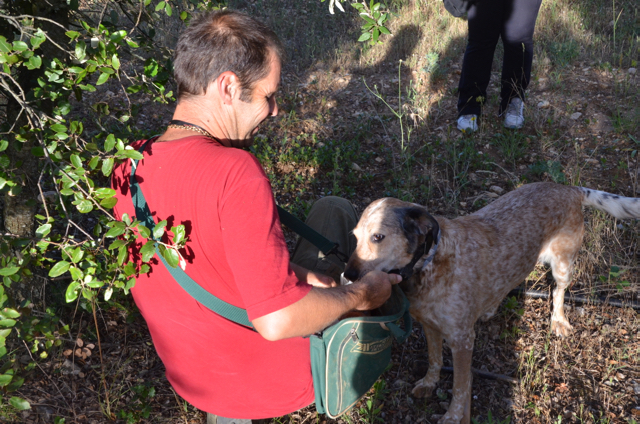 Friends Gary and Tim (who have shared stories here before) are back to recount an unforgettable chasse aux truffes with Christophe (left) and  his dog Cacahuète (Peanut).

La truffe would have been the word of the day but it was recently featured as one of the Hardest Words to Pronounce. So enjoy this new term, taken from Tim and Gary's story:

: a mutt, a crossbreed

The name bastard, cross, mongrel, street corner, door and window, and I won't go on because there are many, is not insulting or devaluing for the dog, it is just a denomination, that does not detract from the quality of the dog. (Google translation of Luvic's comment)

(Dear Reader, let us know in the comments below how you manage to listen to the recording while looking the example sentence. A few of you have written in, asking for help with this issue. Merci!)

by Gary McClelland and Tim Averill

Above the sound of the cigales and the breeze, we heard “ching, ching” interrupted now and then with a firm “arrête!” as we chased after Christophe and his truffle-hunting dog extraordinaire Cacahuète (“Peanut”).  Our notion that truffle hunting was an old man’s stroll in the afternoon shade was replaced with the reality of dashing between trees in the early morning sun.  Christophe must keep up with Cacahuète because, even as a porte-fenêtre (mutt, literally, “in the door and out the window”), he has developed a taste for truffles and if given the chance is “une chienne voleuse.”   We thought perhaps “ching ching” was Provençal for “chien,” but Christophe explained it was his version of “Tiens, tiens, indicating to Cacahuète that a dog treat reward was being offered.  This works about three out of four times. 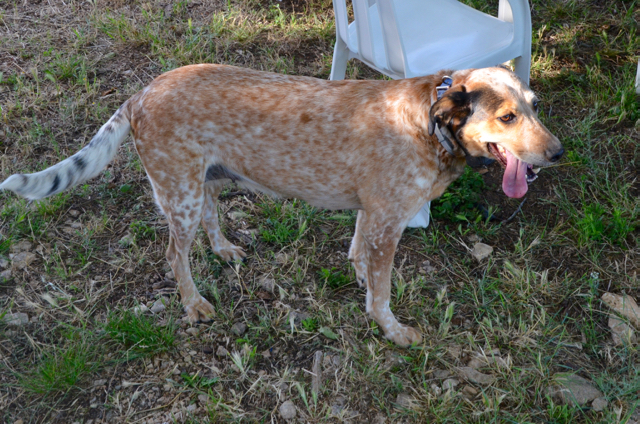 Even when Cacahuète was digging atop a truffle, it was difficult for us to see it until Christophe dug it up with his knife.  A few times Christophe cut off a small piece of truffle for Cacahuète to maintain his interest.  Christophe did not want his beloved Cacahuète to get too hot so we harvested for about an hour, gathering about 750 grams of summer truffles that usually go for about 100 Euros/kg.  A few of the truffles were pourri (spoiled, rotten), but most were ready for market.

We had been introduced to Christophe by our favorite Bédoin boulanger Jean-Pierre.  Before and after our chase through his plantation of 1,500 live oaks, we sat around a table in the shade of a tree, discussing truffles, and eating Jean-Pierre’s bread and croissants with truffle butter made from the more luxurious black winter truffles, and looking towards Le Mont Ventoux, le Géant de Provence, in one direction and towards a tall ochre cliff in the other.  We were very good at this part of the truffle hunting process!

Christophe, tall, lanky, and about 35, spoke with a lilting Provençal accent at a relaxed pace that was accessible even to non-Francophone listeners.  He told us the story of inheriting this land from his father and deciding to plant trees to cultivate truffles, which grow around the root system of live oaks.  He started small and initially the trees did not produce, but with agronomic advances and additional plantings, he began to see enough production to make truffles a business.  Christophe’s affable mood only turned when Lauren asked him about truffle oil.  “Ça n’existe pas.  Ce n’est que de la chimie.”   Like other artisans we have met in Bédoin, Christophe sees his work as a calling, an avocation rather than as a way to earn a living.  He shared a few of his truffle secrets but we will not divulge them here!

Want to speak French fluently? 30-Day French will teach you everything you need to know to speak French on your next trip to France with 30 lessons based on real-life conversations. Try it out.

Dear Reader, help out with these last two terms regarding truffle oil--in the context in which they were used in today's story. Use the comments link at the end of this post.
Ça n’existe pas =
Ce n’est que de la chimie = 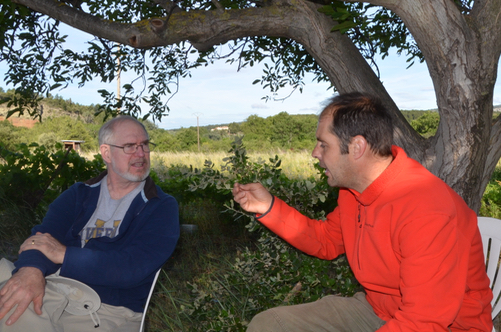 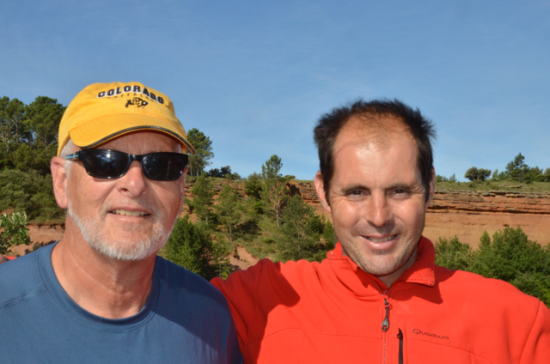 Be sure to read Gary's other posts including one about the beloved game of Pétanque, here. 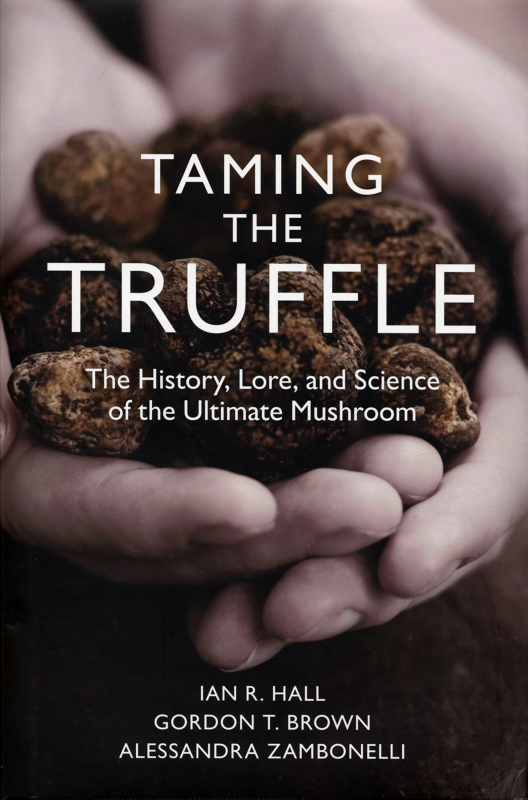 Taming the Truffle: The History, Lore, and Science of the Ultimate Mushroom, order the book 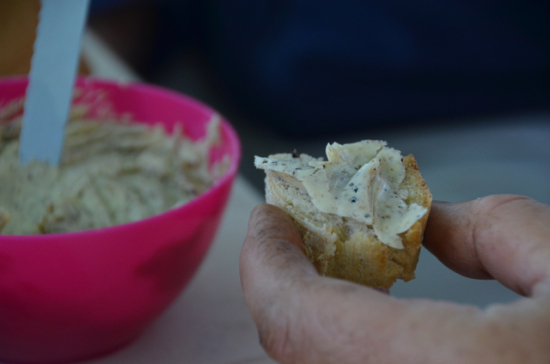 Truffle ZEST : Vegetarian, vegan, dairy-free, gluten-free - made with real truffles, can be added to everything such as soups, potatoes, vegetables, eggs, rice, pasta, pizza and sushi. 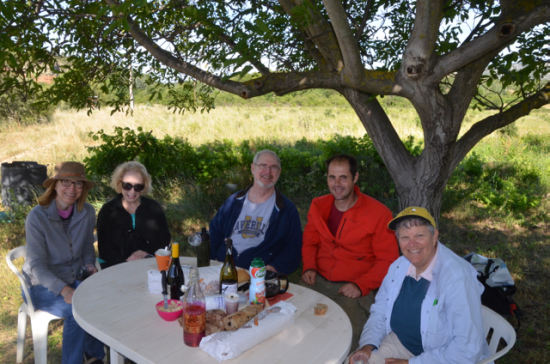 A few of the characters in today's story, book-ended by Tim's wife Lauren, left, and Gary's wife, Lou, right. Help me thank Gary and Tim and these truffle chasseurs for today's fun and educational story. Leave a comment. 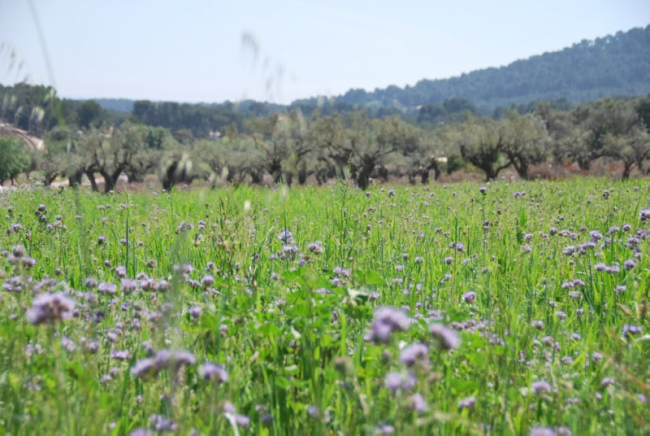 Read Jean-Marc's story and pick out French words to share in the next Vocabulary RoundUp. (photo: Before he planted vines here, Jean-Marc sowed phacelia, a flower that attracts bees as well as being a good soil amendment. In the distance, you see a field of ancient olive trees. Today's bilingual story takes place there....)

"Grassy" words and how they translate to French:

L'herbe du voisin est toujours plus verte.
The grass is always greener on the other side of the fence.

Listen to Jean-Marc read his story aloud, in French

C'est vrai que j'aurai peut être dû les contenir en passant régulièrement les griffes de mon tracteur mais ce n'est pas trop dans ma façon de faire d'aller brûler du gazole, tasser les sols tout ça pour avoir un sol "propre" comme on dit dans le monde agricole qui arrose également ses champs avec du RoundUp....
It is true that I should have kept them under control by regularly passing the claws of my tractor but it is not my style to burn diesel and pack in the earth--all this to have a  "clean" soil as they say in the agricultural world that also waters its fields with RoundUp....

--
Listen to Jean-Marc read his story aloud, in French

Thanks for picking out a few French words from Jean-Marc's story -- to be posted in the next Vocubulary RoundUp. Choose the most useful or the most interesting--or one you had never heard of before & share in the comments at the end of this post. 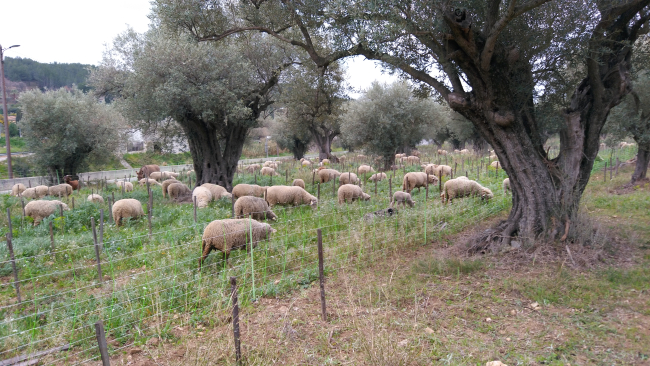 Une photo pour mieux visualiser le travail de tonte (à droite, les moutons sont déjà passées)
A picture to show you the "mowing" work (on the right, the sheep have passed by) See the video here (or at the end of this post--it may appear as an attachment)

WEED EATER - if you do not have sheep, these modern day string trimmers are the next best thing to eliminate patches of weeds

LAGUIOLE STEAK KNIVES are for sale in many of the local French market stands. 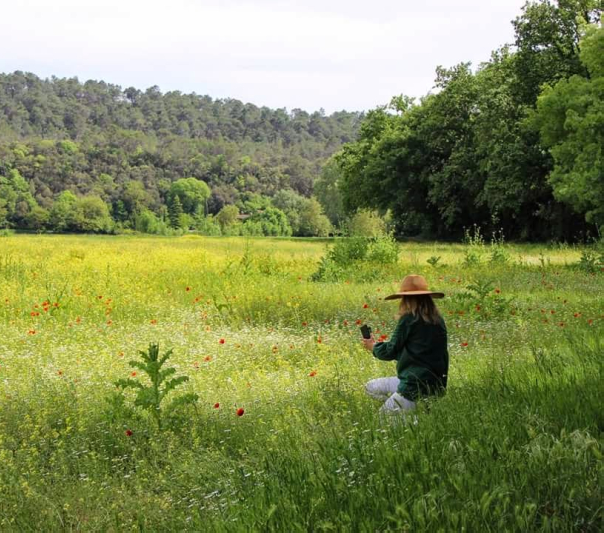 Taking pictures to illustrate these posts. Though this one was taken over a year ago, it illustrates poppies among the grass, which reminds me to tell you that the poppies have begun blossoming here in the south. 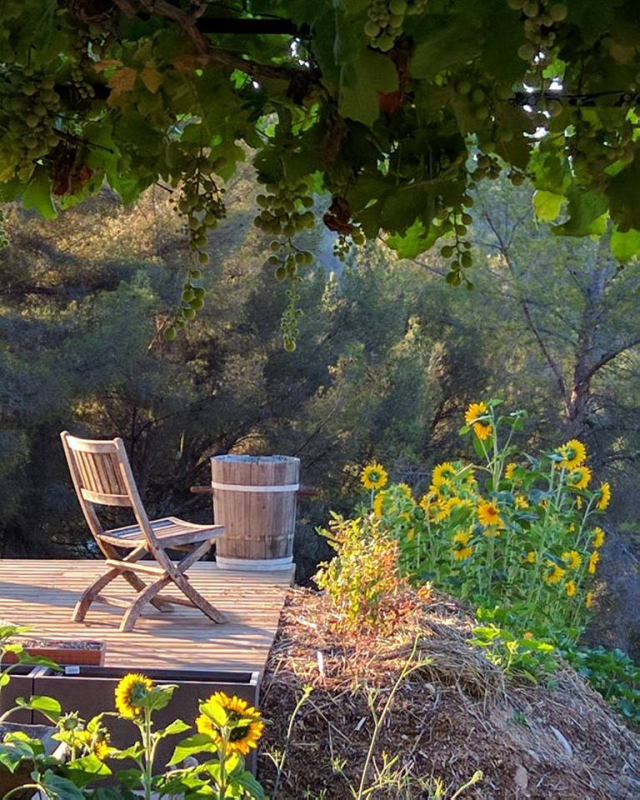 A reminder: if you wish to support the time and effort that go into bringing you this free language service, your contributions, via this link, are greatly appreciated.

Vocabulary Roundup + Listen to all the French words shared in February 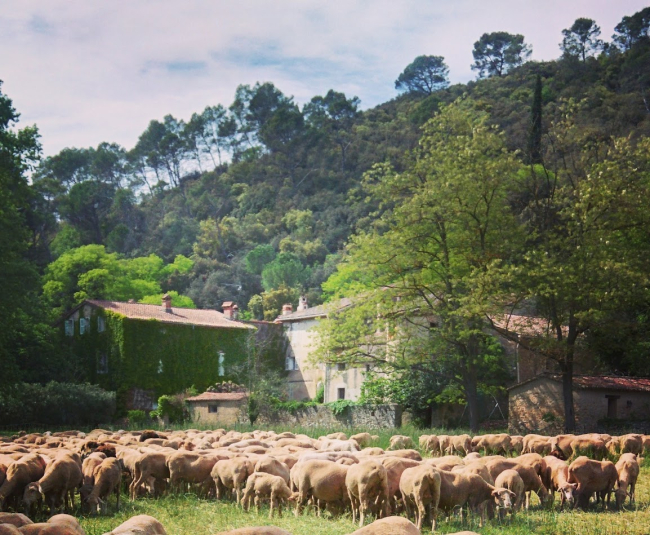 If you read all 9 stories posted in February, you now own a herd of new French words! Let's go over the terms we learned. First, take two minutes to relax and listen to the list of words (you will have another chance at the end of the post): 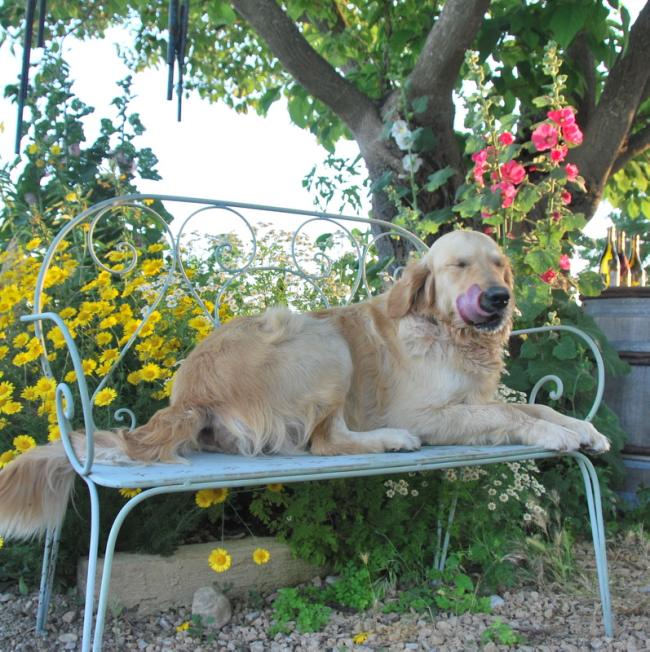 3. Soins des Animaux: Why can't our dog sit down?
(click on title to read the original post) 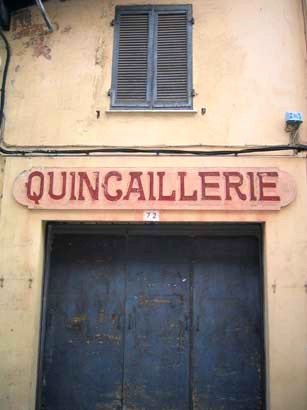 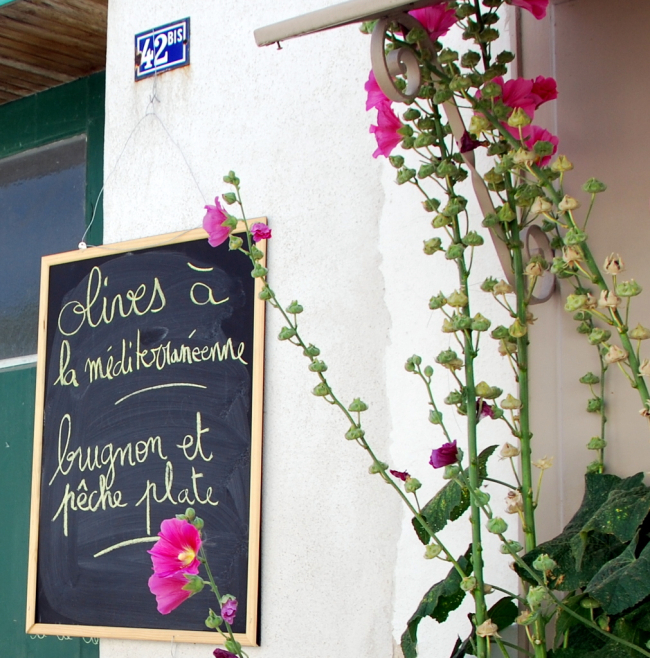 Listen once again to the vocabulary words listed above 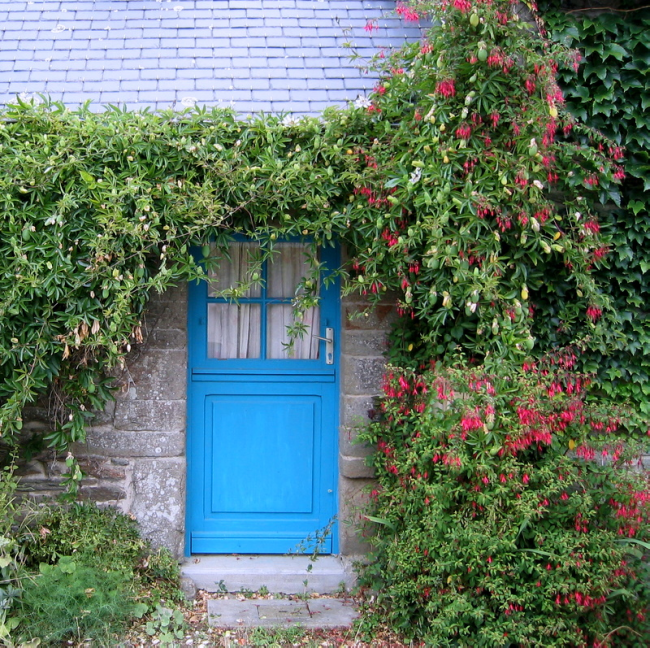 Thank you for reading. If you would like to support the effort that goes into creating this free word journal your contributions help.