Exciting News! An update from my Staycation 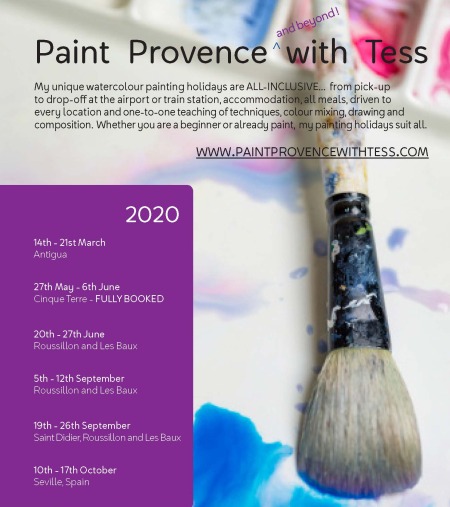 Bonjour from La Ciotat where I am checking in from my staycation to share the good news of Jackie's arrival tomorrow, Wednesday. We are thrilled to see our daughter who we have not hugged since before this pandemic began. We thank you for keeping Jackie in your thoughts and prayers as she navigates 3 airports, traveling from Florida to Paris and onto Marseilles.

Also, I'd like to highly recommend my friend Tessa's painting excursions in Provence. Many readers here have enjoyed these relaxing and creative getaways and have returned several times.

: one who sells produce at a farmers' market

Le maraîchage... is the cultivation of vegetables, of certain fruits, of certain herbs and flowers destined for alimentary uses, in a professional manner, that is to say, with the goal of making a profit or of simply making a living, which distinguishes it from gardening.

If I was flirting with the maraîcher I did not realize it. True, I had experienced that pang of annoyance when another customer arrived, at which point politesse required that I hurry and finish my business. No more lingering about!

Earlier I had struck up a conversation with the maraîcher, after spotting his "Stanford" T-shirt. It was an unusual sight on the small French Island where we were vacationing.

"Are you American?" I had said pausing at his small vegetable stand.

The maraîcher seemed pleased to speak English. "My Dad is from Cognac, " he offered. "Mom's from Dublin." I noticed his accent was more on the Anglophone side.

The maraîcher nodded, smiling into the tomatoes. I was struck by his charm. How to describe it? There was that noticeably timid temperament coupled with a studious-slash-athletic exterior. Superman comes to mind. Indeed, le maraîcher's slightly nerdy façade was quickly giving way to the muscular building blocks beneath it.

"My son is in the same boat," I blurted out, coming to my senses. "His father speaks French and I speak English." It occurred to me that by my mentioning "his father" one might assume I was a divorced woman! I quickly cleared up the misunderstanding, babbling, "My husband speaks French and his mother speaks English. Max's mother that is. Max is my son... He's 17."

The maraîcher laughed, listening to me as he rearranged the organic lettuce. I watched as he tore off some shriveled leaves and tossed them into a compost bucket behind the counter. A lock of sandy-blond hair fell over his eyes. He lifted his giant hand, pushing the lock aside and adjusting his glasses in the process.

Returning my attention to the compost bin, I shook off any errant thoughts. "Oh, that reminds me... I have been wondering where to put our vegetable scraps. I don't want to toss them in a pile in the yard, as we are staying on a rental property. And, I can't bear to throw all this black gold into the garbage!"

"We give ours to the ducks at the farm," le maraîcher laughed.

The only thing more awkward than my conversation with le maraîcher (compost? Really! What a bizarre proposition that was!), were my attempts to avoid him throughout the remainder of our family vacation....

You see, as soon as I left the produce stand, I ran smack into my husband, outside the Tourist office. I must have been blushing. That's when Jean-Marc snickered, "Ça va le maraîcher?"

That was it. There was no way I could face the produce guy ever again—not after it dawned on me that I might have been smitten!

And so the dodging began. Each morning when Jean-Marc and I drank our coffee at the quaint farmers' market, I hid behind the hollyhocks or sat with my back to the onions and cantaloupe or dove for cover behind the giant pots and pans man. Instead of delivering the compost that I had promised, I avoided the produce guy.

But I caught glimpses of the maraîcher, who continued to wear his Stanford T-shirt (I couldn't help but wonder, as I had back in 7th grade when my crush, Doug Pearson, wore that T-shirt that brought out the green in his eyes... I couldn't help wonder whether he had taken care to wear the special T-shirt for a reason (that same shirt that had drawn me in for the first conversation). The thought was as preposterous as it was inappropriate!)

One morning, four days into our vacation, I noticed the maraîcher had changed his shirt (he was now wearing Tintin, after the comic book hero). He was sporting a new haircut, too. My mind equated the change of T-shirt to a change of heart. He had finally given up on waiting for the Compost Lady, who had disappeared along with her kitchen scraps.

Yet, on the last day of our vacation, it didn't seem right to leave without saying goodbye to le maraîcher and offering an explanation for my disappearance.

Waiting for the other middle-aged ladies to collect their lettuce and skedaddle, I hurried up to the vegetable stand.

"It's me, the Compost Lady!" I said, breathless. "I met you last week. Sorry I never made it back, but it occurred to me later that that must have been a slightly bizarre proposition--er, offer--to drop off compost."

"We leave today," I explained. "Enjoy the rest of your summer," I said, bidding him farewell. "By the way, what are you studying this fall?"

Blathering on, I noticed I was spitting as I spoke. Quelle horreur! I had just sprayed the tomatoes with my own bave!

How interesting. For love? For a job? I wondered. But it did not seem right to gather any more information from this charming soul, neither did it occur to me to introduce myself (beyond "Compost Lady on Vacation").

"Enjoy every minute." I cheered, waving peacefully as I walked away.

Back once again at the tourist office, my husband smiled sweetly. "Ça va ton cheri?" 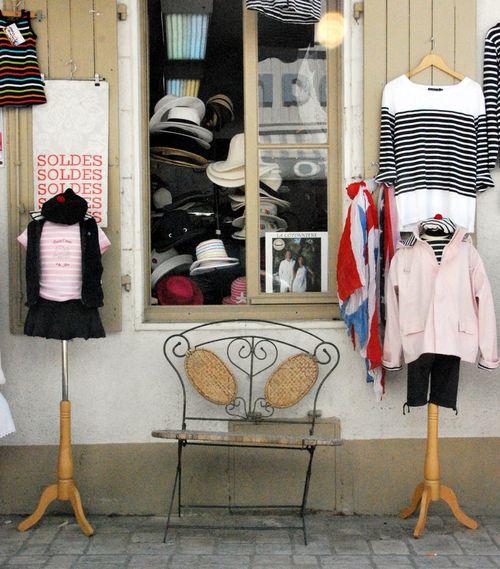 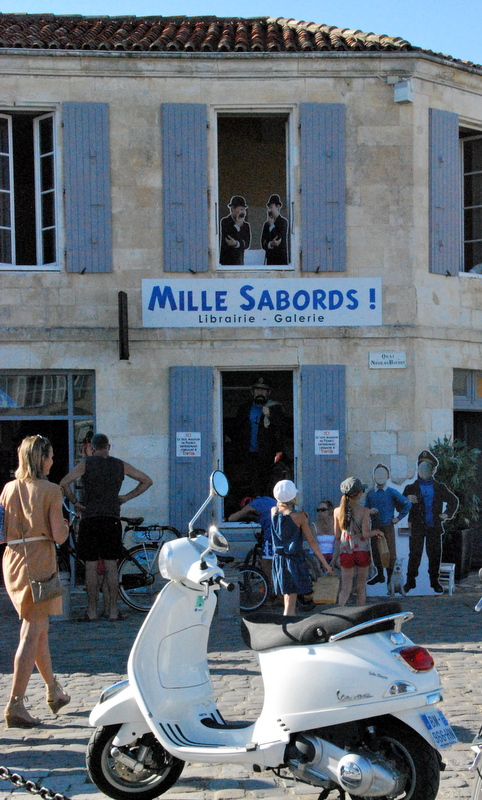 Whimsical windows and a cool Vespa on l'île de Ré. 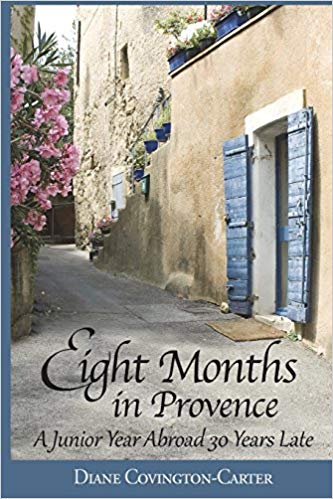 If you've ever dreamed of living in France, it is not too late! Diane Covington-Carter proved that in her delightful memoir, "Eight Months in Provence, A Junior Year Abroad, 30 Years Late." Covington-Carter headed off to Provence at age fifty and discovered that wisdom and maturity made her "Junior Year Abroad" not, after all, thirty years late. But rather, right on time. A great summer read! Order here.

The only thing harder than writing...is not writing. Now there is a thought that has been on my mind all summer, as I try to decide just when to take a break from this 18-year-old blog--this ongoing chronicle of our life in France.

What will happen if I don't write for a fortnight? A month? A year? At worst I would implode. At best I would lose the hang of things, lose ground, making this colossal effort of expression even harder. And we all know:

The only thing harder than working...is NOT working, or, as the French saying goes: L'oisiveté rend à la fin le travail difficile. Idleness makes work difficult in the end.

Difficile...this brings me to a few lines that poured out of somewhere and into my thoughts while out on a walk this morning. I hope they make sense to you, as they made sense to me at the time (oftentimes what makes crystal clear, lightening bright sense to me while out on a walk--after two cups of coffee--makes no sense to me later on). Here are those initial thoughts, and the ideas that followed:

For just as the runner begins to get agitated/disturbed because he has not run, the writer suffers the words he has not expressed. This last thought brought me beyond writing:

...because these NOTS will eventually form KNOTS, stemming the flow of life and love....

I leave you now and invite you to share a few "The only thing harder than.... is NOT...." in the comments. I look forward to reading your words and will be back sometime in the next month...I just have to decide when!

(The only thing harder than deciding...is NOT deciding.)

Wherever you are on your path, I hope these words help. 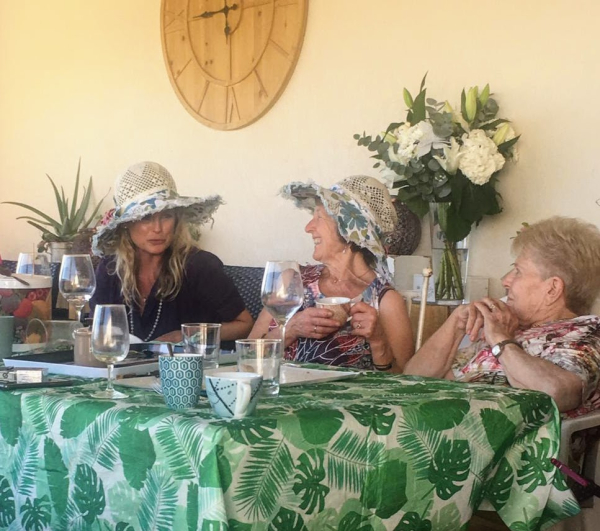 Relaxing with family. Thank you, Cousin Sabine, for the photo at Cousin Audrey's.