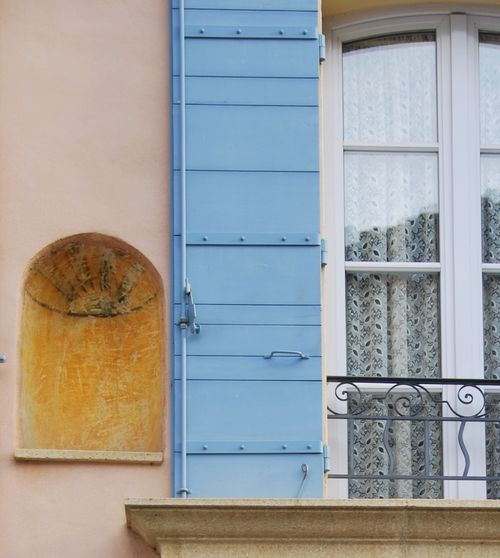 What To Do in Aix-En-Provence?
I received the following letter from a reader and hope you can help by submitting tips on what to do and see in Aix!

If you have a moment, please...  I am thinking about planning a trip to France in late August of this year and would really like to visit Aix-en-Provence as part of that trip, perhaps even stay there as my 'home base' while in France.  I'm hoping to stay for 8-10 days, and would like to visit Paris for a day and see some of the countryside.

I think it would be fun to stay in Aix as it will be fun to see some of the things you've spoken about before and have a better mental picture when reading your thrice-weekly column...

I'm sure you probably get this question a lot, but is there any way you can give me some helpful tips on visiting Aix-en-Provence?

Thanks so much!
LeNora

Friends, please share your Aix-en-Provence tip and suggestions here. Tell us which restaurants, bistros, and cafés to visit. What about B&B's or hotels? Is there a room to rent in the area? What about activities and must-sees? What are some neighboring villages that are worth a visit? Share your tips and ideas here! 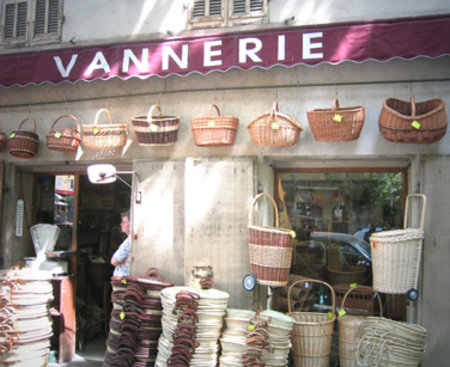 Les paniers for sale in Aix-en-Provence

One of the first cultural differences I encountered after moving to the land of bistros was this: they don't do doggy bags in la France!

In 1990, in Aix-en-Provence, a plate of egg rolls separated me from my future husband. Egg rolls in France are different from those in the States. In France, Asian restaurants serve the fried rouleaux with sprigs of mint and leaves of lettuce in which to roll them. Les Nems, as they are called, are Jean-Marc's and my favorite entrée, and we usually order so many that by the time the main course arrives we are too full to finish it.

At the end of that first shared meal in the restaurant chinois, we had our first leftovers. I explained to Jean-Marc that les restes in America go into doggy bags.  Jean-Marc was amused by the funny term and  his practical side was quickly won over by the concept. But when he tried out the idea on the waitress, asking her to wrap up the remaining food on our plates, she showed neither amusement nor practicality. In fact, she looked a bit put out by the request.

After Jean-Marc persisted, the waitress returned with an empty plastic tub which, judging from the label, had formerly held pistachio ice cream. She pried open the container and slid the contents of both plates inside. I watched doubtfully as the sweet-and-sour shrimp was poured right over the canard laqué, and the riz cantonais was heaped directly on top.

"Ça ira?" As the waitress scraped off the last grain of rice from the plates, her exaggerated gesture embarrassed me, cheapening an otherwise romantic evening.

Walking down Aix's narrow and winding cobblestone streets after the meal, I suggested to Jean-Marc that maybe it was not a good idea, after all, to ask restaurants to wrap up food. It was too awkward for everyone involved when the servers had to go scavenging for odd containers in order to be accommodating.

Jean-Marc disagreed. It was a very good idea, he assured me—no more wasted food. The French would do well to adopt the practice of asking for a doggy bag!

"But they are not doggy-bag equipped here, so there's no use trying to save the food!" As I argued my point, I walked right into a street beggar. Suddenly, three sets of eyes bounced off each other.

I watched my date, who smiled as he crouched to the ground, offering the homeless man the "useless" invention. Le doggy bag.

The homeless man nodded his appreciation. A long pause ended, and Jean-Marc and I walked on. I pulled my boyfriend's arm close. This one was a keeper.

Your edits appreciated. Does the story read clearly? Should it be included in the book? See the comments box at the end of this edition to leave an edit or feedback.

ça ira
will that do?