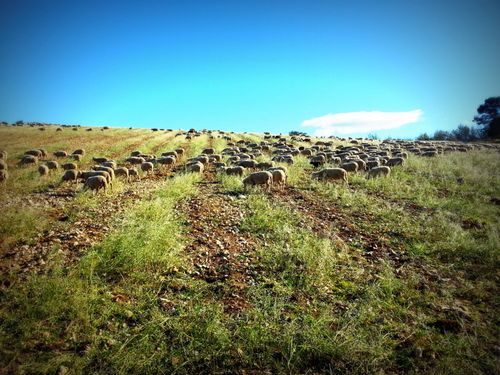 A troupeau of sheep grazing on another pasture. Photo by Jean-Marc.

Audio File: (check back later for the recording)

Il avait eu une époque où il croyait que ses brebis pouvaient tout lui apprendre sur le monde.
There had been a time when he thought that his sheep could teach him everything he needed to know about the world. —Paulo Coelho
A DAY IN A FRENCH LIFE... by Kristin Espinasse
The Lost Sheepherder

"The berger says we can have one if we want one..." Jean-Marc calls, from the next room.

"What's that?" I turn off the tap, and set down the greasy sauteuse I am washing. Straining to hear my husband, I wonder if he thinks these are bionic ears, the way he's always chatting me up from the other side of thick stone wall.
"I said he will give us a sheep if we want one."

Our own mouton? My mind conjures up an Arcadian scene. I see a handsome and friendly grazer roaming our land all year long, living amidst age-old olive trees, the stone borie, and a soon-to-be-planted vineyard. As much as I like the picture, I remember my neighbor's frustration with her own sheep and goat. Du soucis! du soucis!  she shakes her head, whenever I ask about the pastoral pests.

"Oh... I don't think that's a good idea," I call back to my husband. "We already have Smokey and Braise to look after...."
"The sheep the berger is offering isn't for looking after," Jean-Marc corrects me. "C'est pour manger!"

My husband laughs at my misunderstanding. "And by the way," he adds, "I read your berger story and those aren't moutons you are referring to... Ce sont des brebis!"

Brebis! Of course! How unfortunate--as it was just the word I had been searching for in order to avoid so many "mouton" references in my story. But more than a synonym, I needed to once and for all understand that mouton did not refer to all sheep... only mature male sheep!
Oh what do I know? I don't know anything.... I often think of that memorable declaration, made by a dear (and now estranged) friend. I will never forget her lively demonstration, which came after I had complimented her on her wise and gentle mind. Rejecting the compliment, she reached up and began pulling wildly at her hair. Shaking her head with the help of her hair-gripping hands, she put the matter straight, I DON'T KNOW ANYTHING!

I often recall that scene, and the humbling truth behind her message. No matter how many degrees she held, or how many books she had written, and no matter how spiritual she was, she focused not on how much she knew, but on just how little she comprehended.
***
"You must be so cold!" I said to the berger, who stood outside our front door. In addition to his newsboy cap, he had pulled a hood over his head. On closer look I saw he was soaking from the rain! Beyond him, his Border collie looked like a wet sock.

The shepherd shook his head, étonné, and I realized that he was clearly unfazed by the harsh weather.
Duh. He was a sheepherd afterall! A nomad, an all-weather wanderer, not some sort of sunny day sissy. Besides, who was I to assume, and what did I know about his taste in temperature? Just because I couldn't stand the cold and rain, didn't mean others couldn't tolerate it.

Standing beyond our doorstep, the berger was asking for some exact dimensions regarding the boundaries of our land.

"Attendez," I said, grabbing my raincoat.

Outside, I hurried along a muddy trail, trying to keep up with the shepherd. After pointing out the boundary lines, I was slow to return home. I had so many questions for the berger, but didn't know how to ask them.

"Non, her name is Mieszka," Like the first Polish king.

I gathered Mieszka was the shepherd's endearing queen. Having played the dog card twice, what else was there to say?
"So, do you make cheese?" I questioned, as we stood in the rain, a mob of brebis before us.

"Oh..." I said, wishing to change the subject, and feeling guilty for being such a hypocrite (not two weeks ago I had made côtelettes d'agneau for my son and me, to go along with the unpalatable chickpea fritters).

"You sure you aren't cold?" I asked, changing subjects.

"My nose is freezing!" He laughed. I thought about how one of those cagoules would serve him, the kind of mask skiers... or muggers.... wear.

I stole another glance at the berger, who might have been an outlaw. You never knew. He had already reminded me of one of those nonconformist types, the keep-to-themselves characters who never want their picture taken. What were they hiding from anyway? Probably les flics!

I pushed aside the chattering in my untrusting mind. What did I know? I don't know anything! How many times had I pegged an innocent for a criminal? Meantime, it was the ivy-league types that were stuffing helpless women into the trunk.

I didn't have a warm ski mask to offer the innocent berger, but I could give him something for the rain....
"Hang on!" I said, dashing back home to fetch a parapluie.

Returning, I stood with him for a few more minutes, the berger directing the umbrella over me, and I directing it back over him. If he was going to stay dry, I'd better go home.

"Would you like me to bring you some hot coffee?" As soon as I asked I realized my mistake.
Dumb question! Another lesson learned from the dear, wise friend, the one I lost after a swift falling out with her husband: Don't ask, just give! My dear friend never asked what I wanted, she handed it to me.

"Non, merci," the berger said politely.
***
"The berger saga continues," Jean-Marc mumbled, and I stuck my head around the thick corner to listen to the news.

"Last night the sheep got loose and stumbled into the neighbor's yard, eating all the artichokes in the potager!"

"Oh no!" I felt terrible for the shepherd, who had spent the previous morning braving the snow, then the rain--only to face another harsh reality!

I decided to bake a yogurt cake, adding extra heapings of cocoa for comfort. With any chance, I could track down the berger and offer him something for his troubles. How, I wondered, did he find the time to shop? (Maybe he slipped off to the market, and that's when the sheep got loose?). And where did he prepare his food? And was he sleeping in that beat-up estafette?
Worried he'd soon be moving on to other pastures, I threw the cake, still warm in the pan, into the back seat of my car, and tossed the spatula on top of it. Next, I drove up and down the road, below, beyond where the sheep were grazing.

When I couldn't find the berger, it occurred to me that maybe he was napping under one of the olive trees. After all, it was l'heure de sieste. Did sheepherders doze?

I worried that if I got out of the car to pursue him, I might disturb him from a needed siesta. Then again, maybe this is where his trouble began earlier? Maybe he needed to be awakened?!

All these assumptions were getting me nowhere, and the truth was, I was too chicken to pull over and hunt down the berger.
I returned home and took the cake out of the car, hoping to find the courage to try again next time. But my failure in delivering the comfort food was really getting me down.

And then a warm thought encouraged me....

Little did the berger know—and little do we all know—that out there, somewhere, someone is trying to comfort us without our even knowing.

***
Read more about the berger, in the previous story.

To comment on this story, click here. These stories are never finished, and I will continue to peck at the keyboard even after hitting the publish button. If you see any typos or have any questions, feel free to join the conversation in the comments box.

c'est pour manger = it's for eating 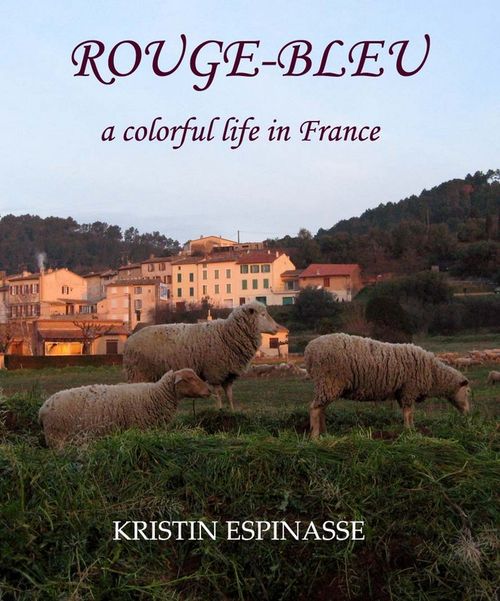 The book cover that never was. (Click here to see which book covers made the cut!)

Did you enjoy this post? Thanks for sharing it with a friend!

A nice surprise for you today: Barbara is back with more delightful French phrases. Enjoy her column in French or English.

Expressions:
en chair et en os = in the flesh
donner chair à = to give life to
être ni chair ni poisson = (to be neither fish nor fowl) to be indecisive

In the series of picturesque expressions, the French language counts many which include an animal reference, their significance more or less easy to understand, but always fun to hear!

Today I offer you a little glimpse of these proverbs and metaphors to which the French are so attached.

- Avoir la chair de poule
"To have the flesh of a hen"
= avoir des frissons sous l'effet de la peur ou du froid / to have goose bumps from the cold or from fear.

- Dormir comme un loir
"To sleep like a dormouse"
= dormir longtemps et profondément / to sleep deeply, for a long time

Tune Up Your French: Top 10 Ways to Improve Your Spoken French
Words in a French Life: Lessons in Love and Language from the South of France
The Ultimate French Review and Practice: Mastering French Grammar for Confident Communication
Mastering French Vocabulary : A Thematic Approach
2000+ Essential French Verbs: Learn the Forms, Master the Tenses, and Speak Fluently!