How to say wasp in French... and the fascinating life inside a figue! 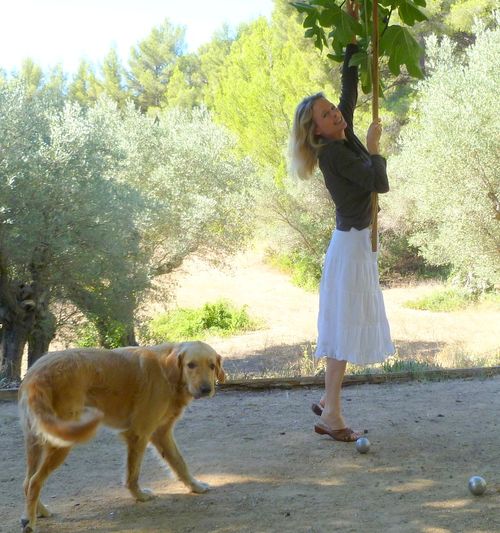 "Ignorance is Bliss." Remember this photo from last September? Back then, while eating my way from one end of this fig tree to the other, I had no idea there was more to a fig than meets the eye....

To avoid wasp stings, an old tip [or trick] from winegrowers: pinch the tip of your tongue between your teeth for as long as the insect threatens. This creates a light corporal tension that bothers [the wasps], if they come to land on the skin. (that story here...)

Figs and the Fascinating Life of a Lilliputian Wasp

Last night I heard a curious sound coming from outside the bedroom window. Toc, toc, toc.... Was it a thief?

My heart fluttered as I tuned into the strange noise. I listened to the intermittent thumping and shuffling, wondering what in the world? Was it a wild animal?

My mind reeled with possibilities, eventually settling on the least spooky conclusion: falling figs! I remembered back a day or two ago when playing fetch with Smokey. As he retrieved his stick, over by the boules court, I saw a scattering of figs lying there on the ground.

Next I noticed the ping pong table. It too was covered with figs.... I recalled the rumbling sky and the burst of rain we'd had the day before. The figs must have been knocked from the tree.

Allez. Pousse-toi, Smokey! Va là-bas, Braise! Like looters who appear on the scene, our dogs rushed up to the fallen goods, attempting to cash in on the catastrophe.

I reached down to pick up a fig and saw it was too young to salvage. But then, could one eat an unripe fruit? It was a question I'd often wondered about. Such a pity all these figs might be destined for the compost pile, instead of our plates--in the form of tarte à la figue or figues farcies au fromage bleu or "figues tout court"!

Impatient to know the answer I tore open one of the figs. Instead of the usual raspberry color with lovely star-burst yellow accents, this one was pasty white inside.

As I stood frowning into the fig my eyes caught on something... something wiggling! Dropping the fig I wondered, Was that a worm I just saw?

I walked over to the ping pong table and picked up another fig. Splitting it open I searched the interior until--wiggle, wiggle, wiggle!--I found what I was looking for. Beurk! C'est dégoûtant!

Any disgust was soon replaced by curiosity. The little fig in my hand was teeming with life. But how had the wiggly vers gotten there? Turning the fig round and round, I could find no port of entry....

An internet search ("worms in figs") opened up a fascinating new world--in which two living things come into being by the grace of the other--a process called mutualism. But how is this possible and which came first--the chicken or the egg (or the fig or the wasp?).

Quit sait? Meantime what is known is this: because of the location of the fig's flowers (inside the fig), to pollinate it a female wasp has to enter the fig through a tiny hole in its base. It takes a very small wasp to do this, hence its moniker "la guêpe liliputienne".

Once inside, the female deposits pollen and lays her eggs, which soon hatch. After the pupal stage, male wasps quickly find their way over to young females--and mate! Next, ever energetic, the males forge an escape route for the females (remember, everyone is still trapped inside the fig!). But all that gusto soon goes broke. The machos die at or near the sortie de secours and only the females make it out alive.

As the females crawl out of the fig, their little legs collect the pollen distributed by the first wasp.... Exiting, finally, the fig they salute their fallen heroes (OK, this part's made up) and, without missing a beat, make their way over to the nearest fig and into a little hole there at the base. Next the whole extraordinary cycle repeats itself!

As I said, some of the males--and those females who've lost their wings on the voyage out, die sur le chemin...   These unlucky ones remain there, fallen heroines and heroes, trapped inside the fig which then grows and ripens around them--like a sweet tomb.

At this point you may be wondering, like I was, whether or not to give up your addiction to figs? Could you overlook this wiggly fact and bite into the luscious fruit with the same wild abandon?

Better than a sci-fi movie, the mutant fig eventually (and completely) consumes the unlucky wasps--this with the help of alchemy! ASU's Ask A Biologist column explains the process:

Figs produce a chemical called “ficin” that breaks down the wasp bodies. Ficin is so effective at breaking down, or digesting, animal proteins that natives of Central America eat fig sap to treat intestinal worm infections.

The article goes on to say that the rumor some of us once heard (about fig newtons containing crushed insects) is false. As for the figs on the trees, it all depends....

Recently, I watched my friend Isa reach for one of our figs while admiring our fig tree. Je les adore! She cooed, about to pop one of the fruits into her mouth.

Noticing the figs weren't ripe yet, I yanked the fruit out of her hand.

Comments
To leave a comment, click here -- or share your favorite fig recipe (and assure me that you are no namby-pamby--that you won't let some lusty wasps keep you from enjoying this fascinating fruit!). 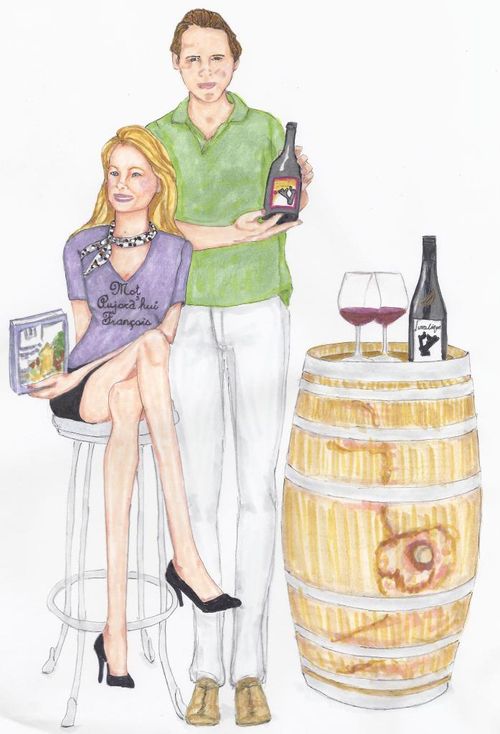 Kristi and Chief Grape. (We moved from the Ste Cécile vineyard, Domaine Rouge-Bleu, almost one year ago, but Jean-Marc will always be the grape chief. Meantime he's getting ready to plant his next vineyard). Painting by Dana Constance Thomas. At Dana's blog, you will find the interview we did together about what inspires me... and the answer to this question : If  Heaven exists, what would you like to hear God say when you arrive at the Pearly Gates?. I had a lot of fun answering that one. Don't miss the interview, here! 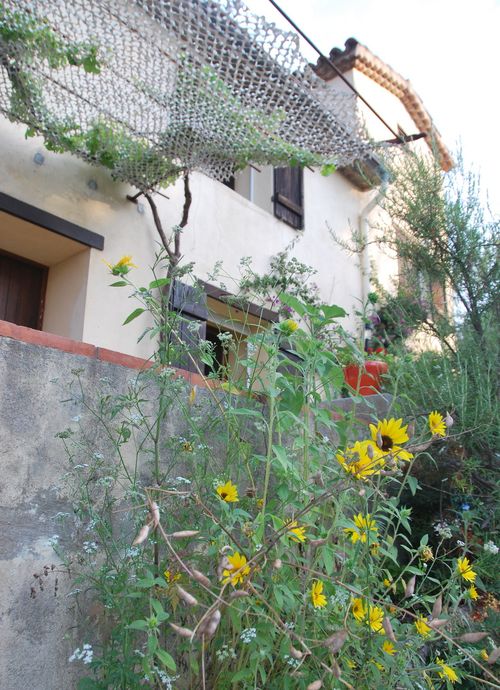 I planted sunflower seeds sprouts last fall -- and forgot about them. Those are radish pods. Having fun in the garden -- hope you are having fun there, or elsewhere. Enjoy your day.