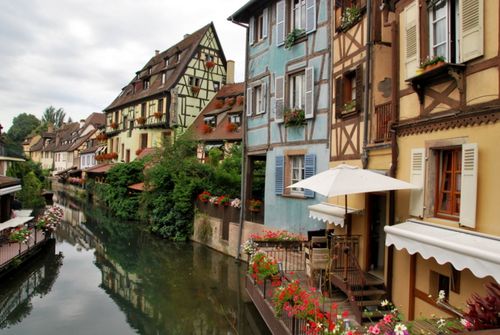 Last week we cast on in the learning to knit post... this week we cast off to sea in today's larguer edition. Photo taken a few weeks ago, in Colmar, Alsace. (Today's story takes place 8 hours south, on the Mediterranean coast, in the town of Fos-sur-Mer.)

: to cast off, to slip the mooring ropes

Correct Your French Blunders: How to Avoid 99% of the Common Mistakes Made by Learners of French. Speak and write French as if it were your native tongue! Order here.

A Day in a French Life.... by Kristin Espinasse

My hands are clamped to the seat beneath me as I sit doubtful about boat security. I don't know anything about floating vessels... and fear the seat-belt question might seem absurd to the thrill-seekers beside me. Instead, I straighten up and inquire as any self-respecting 6-year-old would: how much longer?

My friend Rachel responds sympathetically: est-ce que ça va?
I assure her that tout va bien, but it is my husband that I am concerned about. Jean-Marc is standing a little too close to the side of the boat's bow, his hands holding onto its flimsy rails. His grip does not stop him from becoming airborne each time we hit a wake, or houache. Our little boat is surrounded by huge industrial ships, off in the distance. The ripples they send our way seem as big as surfer waves!

First Mate turns to me: "We'll be there very soon," Rachel assures me, pointing to a speck on the horizon. Next, she tries capturing my attention by drawing my eyes to the designs on the surface of the water. "Look at the foam! J'adore la mousse!," she laughs, pointing to the intricate "V" design left by the boat's passage. I glance over my shoulder to view the bubbles, forcing an enthusiastic look across my face... but I won't turn around for fear of losing my balance!

"I am sorry about cette horreur!" Rachel apologizes, her eyes trailing over the industrial coastline of Fos-sur-Mer, where steel industries, and gas and chemical stations litter the air with pollution. From our perspective, this far out to sea, the coastline is a great ashtray and the buildings are cigarettes, each with a thick ribbon of smoke rising into the air.

There is a certain futuristic intrigue that keeps the scene from looking entirely foreboding. "Don't worry," I assure Rachel, not wanting my friend to feel she has to make excuses for her hometown, where she is rearing three young boys while caring for her mother, who is battling cancer.

"We eat organic food," Rachel winks, "to make up for all the pollution!" Soon I am smiling again, remembering the organic sunscreen my friend slathered onto my shoulders. The pasty "bio" coating is currently providing a good laugh, but the comic relief is short-lived... when the speedboat turns sharply on its side!

Just when I am about to shriek, Rachel grabs onto me. "Ne t'inquiète pas!" But it's too late: I am now sutured to the seat as Cyril swings the speedboat around in a tight circle. When will it stop? I begin to wonder whether our captain isn't just showing off--in which case I strongly object: "Ça suffit!"

Very soon I am ashamed for such a hasty judgment. Cyril cuts the engine and reaches for a long bar with a hook at the end... in time to fish my sun hat out of the water. Cyril was not turning in circles for amusement -- he was kindly going back to retrieve my casquette, which had flown off!

Back on track and that little speck on the horizon soon becomes an eyeful of pristine sand. No trees or buildings... only the soft undulating surface, where endangered dunes rise like a whisper in the night. We have arrived at the presqu'île. Fifty or so meters from land and Cyril anchors the bateau à moteur. I look around, wondering about the raft that will take us to shore... just where is it?

"You did wear your maillots de bain, didn't you?"

First Mate Rachel and I look at each other inquisitively. Next Rachel's eyes sparkle like a bride's before the threshold: "And miss the chance to be carried over to shore by such strong men?"

I send a wink of appreciation over to our ingenious first mate, as we take turns dipping our toes into the water during the men's long walk to shore....

Post note: Later on I discovered these photos on my camera, thanks to First Mate Rachel, who had snapped a few souvenir images. That's I and Chief Grape... who got back at me, several times, by dipping my backside into the cold water.... Click to enlarge photo, taken by Rachel Fabre (that's her hubby, Cyril, to the right, and below left). 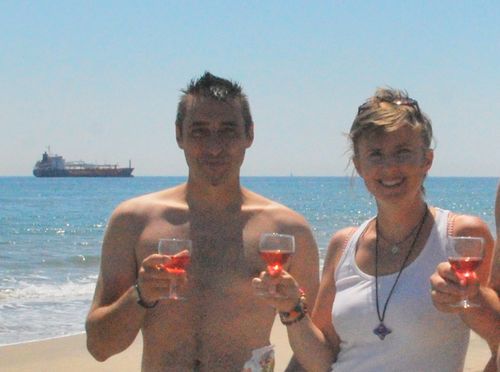 Le Coin Commentaires
Are you adventurous? For some that might mean venturing out on a speedboat... (for others it might be bungee jumping from the Eiffel Tower!). Share a tale of your own, here in the comments box.

une houache = wake of a ship 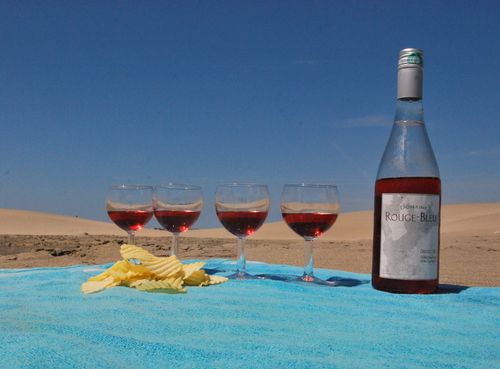 Chief Grape, Capitain Cyril, and First Mate Rachel enjoyed some Domaine Rouge-Bleu Rosé. For our California readers, if you are near Healdsburg, stop by Spoon Bar, where our rosé is poured by the glassful!

Sara Midda's South of France is a place of ripening lemons and worn espadrilles, ochre walls and olive groves, and everything born of the sun. It lies between the Mediterranean and the Maritime Alps, and most of all in the artist's eye and passion. Read the glowing reviews, click here.

"We could bore ourselves to death, drink ourselves to death, or have a bit of an adventure..." It was absurd. It was foolhardy. And it was glorious. When they retired, Terry Darlington and his somewhat saner wife Monica—together with their dog, a whippet named Jim—chucked their earthbound life and set out in an utterly unseaworthy sixty-foot canal narrowboat across the notoriously treacherous English Channel and down to the South of France. Have a minute for another story? This one is about The Writing Life -- it was posted one year ago... It might offer inspiration for anyone struggling to fill "la page blanche" or to face a blank canvas. Read it here. (Picture of Smokey taken one year ago).