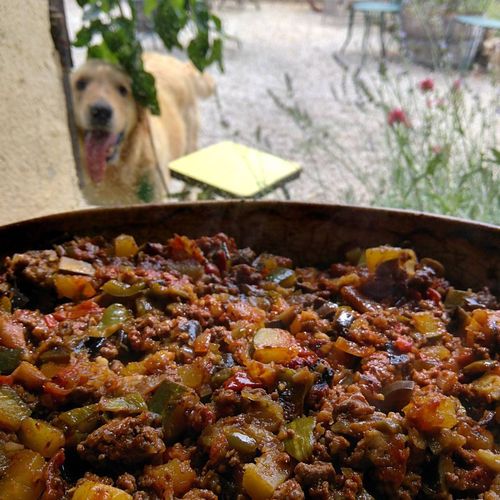 This deliciousness you are seeing, above, is French artist and friend Yvon Kergal's recipe for caramelized "Ratatouillasse" (apparently a valid scrabble word, though no other definition found...) It's the most delicious hamburger-ratatouille combo ever, find the recipe here!


A DAY IN A FRENCH LIFE... by Kristin Espinasse

There comes a time in every parent's life when they want to run away. But this morning's escape wish comes at an inopportune time. Far from leaving my home, I am scheduled, tomorrow, to ask the French government for a new carte de séjour: my 10 year resident's permit has expired for the second time and I am once again in a precarious sans-papiers situation, no more than an étranger en situation irrégulière.

Add to that this morning's meltdown after my flesh-n-blood French counterparts returned from the States only to glander for days...while Mom does the cooking, cleaning and laundry rattrapage. And while caring for my kids actually releases endorphins in my body--the comfort I get in being able care for my children while I still can--it is for the very same reason (their burgeoning adulthood) that I am at odds with their relaxed attitudes: in order for them to succeed in life, they must learn to organize!

But I should talk! Lack of organization is what has put me in this clandestin situation with the French authorities. "You do realize that your residence permit expired 3 weeks ago?" The woman behind the security window is not smiling.

"Yes," I admit. "Veuillez m'excuser. I have been caring for a family member... who has since passed away." (I felt guilty using this information to my advantage, but surely Breizh would want to help in keeping me united with my children and my husband,  the family she looked after for nine golden years. Come to think of it, this may explain the sudden onslaught of emotions on entering the Préfecture in Toulon. As Jean-Marc and I sat down with an audience of immigrants (all waiting impatiently for their number to be called by a French authority), I burst out in tears.

"What is wrong?" Jean-Marc asked.

Maybe it was the sight of so many people waiting to plead for residency... a 6-year-old boy, oblivious to his situation... a young mother wearing a headscarf... an older couple looking as fragile as the numbered ticket, somewhat wet and crumbled, in my hand.

I used to be awed by the expats in literature and yearned to be one of them. Decades later and I am a part of the expatriate community in France. But a funny thing happened the moment I became an official expat: the term suddenly didn't fit me at all. It sounded unpatriotic. Though I had left the States, I felt no less an American.

I once heard the term "immigrant" used by Americans in online expat forum. My first reaction was, how can you consider yourself an immigrant? Have you fled a war-torn country? Isn't an immigrant someone who comes to a country for a better quality of life?

Back at the Immigrations waiting room in Toulon's Préfecture, I look up at the surveillance camera and imagine what the authorities are seeing among the group of immigrés: a woman with tears streaming down her face,  sandwiched between a 6-year-old and an older couple. The tears are misleading given the catharsis taking place. I am so grateful to be here in France, having come here 23 years ago pour une meilleure qualité de vie. And it is the very reason I wish to stay here: to help my children understand the gift they've been given and to share this culture with others, by talking about the French way of life.

As I type this letter to you, I hear dishes clattering and silverware falling into the kitchen drawer. My daughter is done vegetating from her jetlag. When she's finished with the dishes, she has promised to help me with my lettre de motivation (A document the French government has asked for).  I began practicing with Jackie yesterday, by reading her the first line of my letter....

"Maman!" Jackie says, "It is called a une lettre de motivation... but that doesn't mean you begin it with "I am motivated." And never use "car"! We quit using car ( "because") after 5th grade!"

"No! Don't use parce que! You must not use "because" at all! In France, you must use argument to convince people!

Looks like I have a lot of work to do to get this letter ready for tomorrow. And I realize, now, I have one more point to add to the list of arguments as to why I should remain in France....

Dear Monsieur le Préfet, would you be so kind to grant me ten more precious years in France, car... parce que... ETANT DONNE QUE ... given that I have so many things to learn and to share.


Postnote:
A parent tries her best to raise considerate and responsible kids. I was so touched to receive, just after writing this story, a lovely note from Gail and Fred, the couple in Portland who allowed Max to stay at their home all on his own. Gail writes:

I just got my computer back and wanted to send Max a thank you for the way he kept the apartment. It was clean and neat...couldn't have had a better intern in the space. Also, he left a bottle of wine and tea set that I will write and thank him for. Picture of me and my daughter, taken 12 years ago in La Ciotat. Everything else that I would like to teach my children is summed up in this famous poem: Read Desiderata in French and in English here.