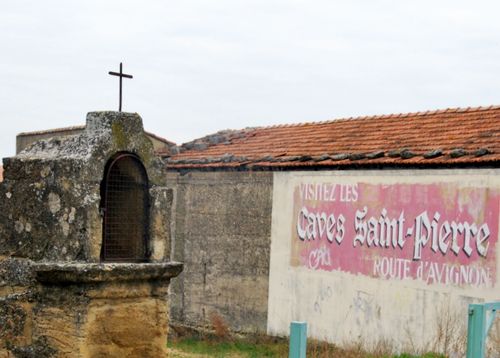 On being on the moon in Châteauneuf-du-Pape. Today's subject is absentmindedness....

We took the day off, yesterday, to join friends in the wine-making town of Châteauneuf-du-Pape. Chief Grape had called ahead to reserve several vineyard visits, which would be especially interesting for our friends, each of whom is involved, in one way or another, dans le mêtier du vin.

Wine is not my passion, but that did not keep me from tagging along with the grape enthusiasts. Sure, all that vine talk might get boring, but I could always enjoy the company of friends—and then there would be that delicious midday pause (lunch at La Mère Germaine!). There would also be plenty to see—eclectic village windows, sleepy stone façades, and other such camera candy. So what if that meant suffering so many oenopoetic arguments on appellation and vin nature?

...At least I think those topics were brought up, then again, how can I be sure? For I did as I always do during a swarm of French conversation: I escaped into the recesses of my mind, letting the foreign chatter dissolve into an agreeable murmur.

The French have an expression for this kind of "absentmindedness" (I prefer a more dignifying  term—such as "mind travel"... or even "thought voyaging", for the hint at adventure... ). For we who lapse into a cognitive retreat, the French say: elle est dans la lune!

Et c'est vrai. There, in the apex of my mind... on that luminous half-moon, my two legs dangling over the golden edge, I can best view and appreciate my surroundings. Removed from the chaos of chatter, the world around me softens up... into a romantic still life. Though I no longer hear, I see: there are French lips flapping—but no voices, arms-flailing—but no words to ride them. When I dip back into conversation, or "come in for a brief landing", I find the opposite to be true: I hear voices... but no longer see those fabulous flapping lips, I understand words... but no longer notice the flailing arms. Perhaps some senses shut down with the opening of others? In that case, one has to choose: between seeing and hearing. Which do you choose?

I used to feel self-conscious about this tendency to float away from conversation, in favor of returning to my lunar perch, where I could swing my legs over the slivered moon's edge and watch the animated scene before me.

I began to have a sneaking suspicion that my inability to pay attention to a conversation might be evidence of a low intelligence quotient. I wondered, was I dumb?

And then I heard about a character called "The Absent-Minded Professor"! I began to feel hopeful: if an academic could be nearly perpetually absent-minded, then maybe I wasn't slow after all? And maybe I didn't have to try so hard to conceal my own attention lapses? If worse came to worse and I was caught, I no longer had to feel like a space cadet; I could brush off the incident as "an academic interlude"... and happily return to outer space pour être sur ma lune, as the French say.

That is not to say that embarrassing situations don't crop up. It is a risk an absent-minded one just has to take. Yesterday in Chateauneuf-du-Pape, for example, at the tail-end of our first vineyard visit, I decided to "land" in the current conversation. It looked as though the tasting was wrapping up, so I asked what I thought to be a "safe" question:

"Quelles sont vos horaires d'ouverture?" My intention was to share the vineyard's location and opening hours with others.

My husband snickered. Confused, I searched the faces in our group for any clues of dissent.

"Why is that a stupid question?" I asked.

Thankfully the women in the group—friends Gilda and Caroline—stood up for me: "It is not a stupid question! In America," Gilda explained, "there are no stupid questions."

"But in France," Caroline offered, sympathetically, "every question is a potentially stupid one!"

How true! I thought about cultural differences and, once again, I was off... to ponder that thought.

Post note: For many of us, listening is a core value. I do agree! But I find that it becomes difficult to listen, for long stretches, to French conversation. At the end of a dinner party (in French), many French language learners feel like their heads are about to explode. Is it any wonder that some of us float off... to decompress sur la lune?

P.S. And one more embarrassing incident (and an apology to Caroline, from Perth): Earlier that morning, as I wished my friend "Happy Australia Day!" Caroline admitted to having celebrated by enjoying Vegemite on her buttery croissant. I had thought that was so funny... Vegemite on a croissant! Only, hours later, it didn't stop me from asking Caroline, "What did you have for breakfast?" ...now to figure out how much of this is absentmindedness—and how much is forgetfulness?

(The above confession was also an excuse to wish our Australian readers a belated Happy Australia Day! Do you like the idea of Vegemite on a buttery croissant?)

Le Coin Commentaires
The best part about writing these stories is reading your messages. Whether you share a story of your own, or whether you just want to say "bonjour", know that your messages are enjoyed. Please don't forget to write your city next to your name :-) Click here to leave a comment.

Quelles sont vos horaires d'ouverture? = what are your opening hours? 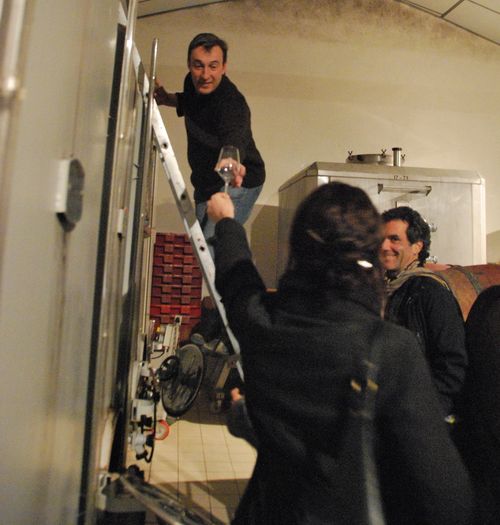 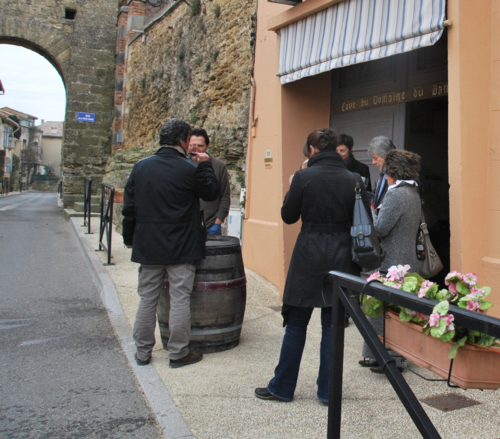 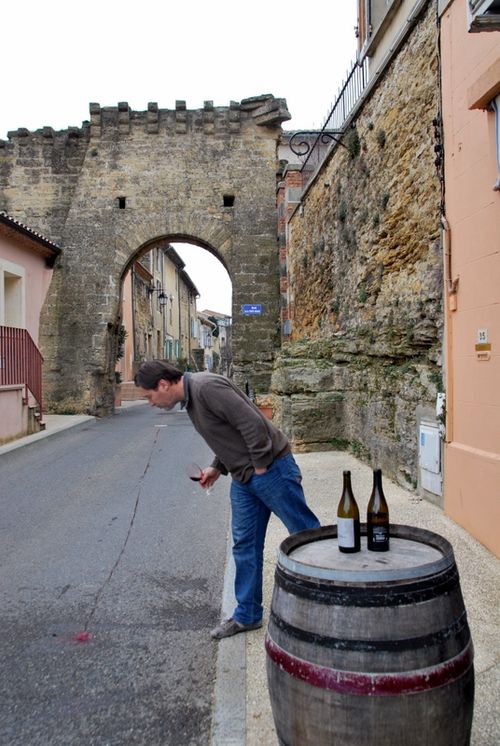 Only a grape enthusiast could appreciate this. To the rest of us... it just looks like spit! 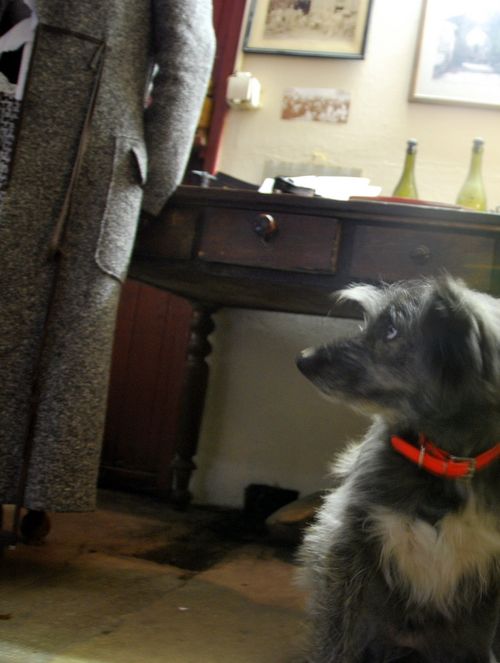 And here is Kiwi The Dog, my cousin Audrey's charming chien. (Hi Audrey xoxo). Kiwi is admiring Gilda's wonderful coat--by the way Gilda and Robert Camuto joined us for the day. Read about another tasting we did here (wine lovers will not want to miss this story!) 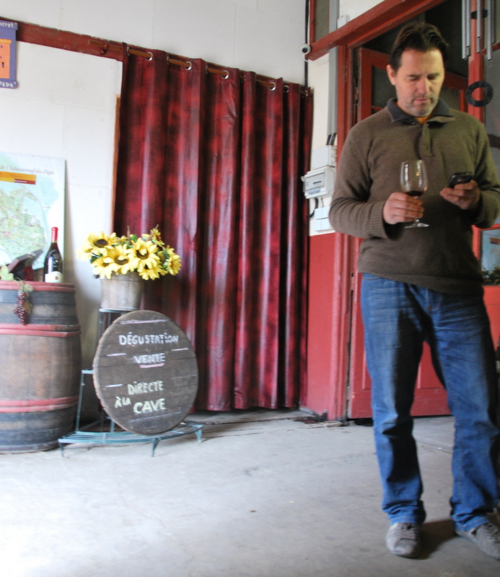 Chief Grape, a.k.a. Jean-Marc. I wrote, in the beginning of the story, that we took the day off... but do wine makers ever take the day off? 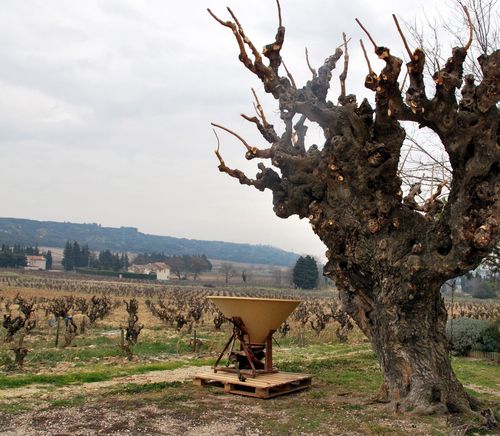 We also visited Laurent Charvin at his Domaine Charvin. This interesting arbre (which resembles a gigantic grape vine) is really a mulberry tree. Be sure to call ahead to visit any of the vineyards mentioned in today's post! 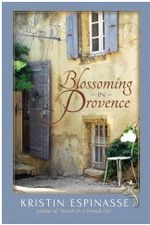 S.V.P.!: I need your help in getting out the word of my latest book!

Thank you very much if you have already purchased a copy of Blossoming in Provence. Your purchase is one of the best ways to help me to continue publishing these educational "stories in a French life".

If you enjoy this free newsletter, please consider supporting it by buying a copy of my book.

You might consider buying a copy for a friend of family member. Would someone at your office or at your school enjoy these short stories? Blossoming in Provence is a book for all ages. Both men and women enjoy the book, making it a perfect gift for a birthday or even for Valentine's Day.

Thank you very much for your support and for helping me to get the word out about Blossoming in Provence. When you click over to the page at Amazon, you will also notice the possibility to share the page via Twitter and Facebook and email (let your mouse hover over the "like" button, just beneath the books title.