Thanks, Tessa, for the fleurs! I'm beginning to see color all over the house! Oh, and there's Jean-Marc. By the way...

Meet with Jean-Marc in Orange County, California this coming March 20th or during his 2012 USA wine tour: click here to see all the cities Chief Grape will be visiting

: to botch up, to do something quickly and badly, or without care

Quant au ménage, il vaut mieux une partie faite correctement, que le tout bâclé. As for the housekeeping, better to do a part of it well, than all of it sloppily.

A Growing Pile of Procrastination

Ever since encountering the French word "bâcler", I have been looking for an opportunity to use it... and then I stumbled over that pile of socks while doing laundry yesterday....

Ce tas de chaussettes! That growing, menacing heap of socks! However was such a monstre created? Ah... oui, it began in the early days, when I first came to France...

As a young mother I would stand outside the école maternelle, waiting for my 3- and 5-year-olds to be let out of class. During the lazy attente I listened to the other mothers who chatted about tout et rien. I will never forget hearing one of the mamans talk about socks:

Gosh... I had never thought about that before: not washing socks with the other clothes... especially not with underwear!

That afternoon I looked at my dirty laundry with fresh eyes. Every sock literally stood out, and why shouldn't they? They were caked with dirt! (My family has a bad habit of wearing their socks outside (on the front patio or in the garden). And to think, all this time I had chucked the dirty chaussettes in with the rest, including les culottes. Quelle honte!

Since that time, it never occurred to me to question or disprove the "no-socks-to-be-mixed-with-other-laundry-theory"; besides, the French seemed to excel and to take pride in the business (or "art"?) of laundry--why else would they expertly drape wet clothing outside their windows, tempting tourists to snap photos such as this one: 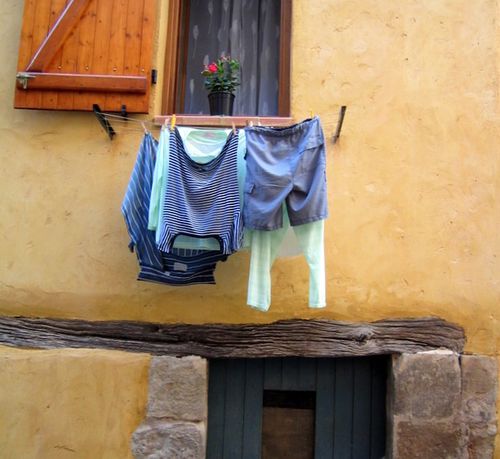 ...and notice: no socks mixed in with these things!

I might have stood by my own laundry ethics, but for bad timing: I had just received a scathing email from a reader who was scandalized to have read my "no-ironing" post (the offensive essay has since been deleted from the blog, but you can read it here). There followed a page-long rant about how the reader cared enough for her own family to iron their sheets AND their underwear... only a mère indigne would do otherwise!

That was that. Plus jamais! That, yes, that must have been the day that my laundry chore got carried away...

...Away to a neatly categorized box called "socks". The problem then was this: there were never enough socks to make up a full load! It eventually dawned on me that I might add other items to the sock pile, so as to grow it faster: Cleaning rags and floor dusters might be added to the mix. I wondered, what would that French mom who never mixed socks with laundry think of this? Was it okay to mix rags with socks? And which were dirtier: the rags or the socks?  Would one not compromise the other? Maybe a new pile should be formed? Would the laundry ever get done? (It was taking long enough to do the chore without a clothes dryer all these years; especially not fun is the chore of hanging up socks one by one by one... dozens of them!)

And on it went, this laundry dilemma, eventually snowballing into that pile of socks for which I could now find a purpose!: if only to employ a humble new French word: bâcler. Yes, it had somehow been bacléed or botched... this job of washing socks!

Today's question: do you mix your socks in with the rest of your laundry? Or have you other "enlightening" laundry habits to share with us--stuff we've never thought of before, hints or astuces that might turn even the least inspired among us into "laundry artists"? Please share your tips with us here, in the comments corner. (Make my dad, Kip, happy, by including your city next to your name!)

Do you know a laundry-challenged person like myself? Why not forward this edition on to them? There's hope yet!

bâcler = to do something quickly and sloppily

quelle honte! = what a disgrace!

tout et rien = everything and nothing Maybe this post should have been called "Loves chairs and flowers" instead of "sloppy, or to do something quickly and badly". Or I might call it "Caroline's Hat"--which I swiped she gave me, after the harvest. 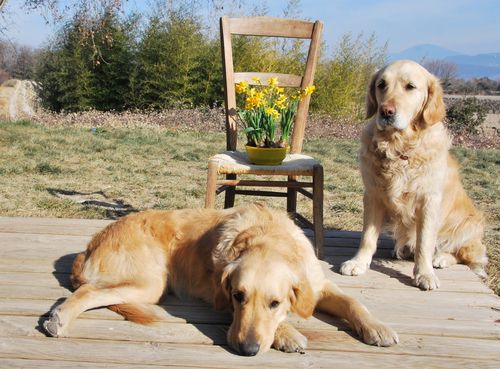 Mama Braise says: Smokey! Don't take it so badly. Just because you can't say narcissus five times fast doesn't mean anything, it especially doesn't mean you are one of them.

Smokey: One of them?

Mama Braise: You know: someone who is plein de soi.

Smokey: Someone who's full of "silk"?

Smokey: What are they called?...

Question for the French speakers out there: I'm confused regarding Jean-Marc's phrase «Kristin ne pourra venir avec moi...» I would have expected a «pas» after «pourra» to complete the negation. Is this simply a typo or is there yet another rule governing «ne» usage that I'm clueless about (explétif omitted) ?

And thanks to Sarah, Millie, and Nadine (and to anyone I may have missed!) who tried to help answer Glenn's question in the comments box. The answer is as Nadine explained:

NE...PAS : There was NO typo, friends! And it's not a new rule, just an old one... But in literary French it is not only accepted but suggested to delete the "pas" for elegance. When talking about France and the French, you all may have forgotten about their elegance !!!
Be well tout le monde !
nadine, Napa, Californie

By the way, you can contact Nadine if you are looking for French lessons. Just type her email address into your mailbox and send her an inquiry. Here's Nadine's message: 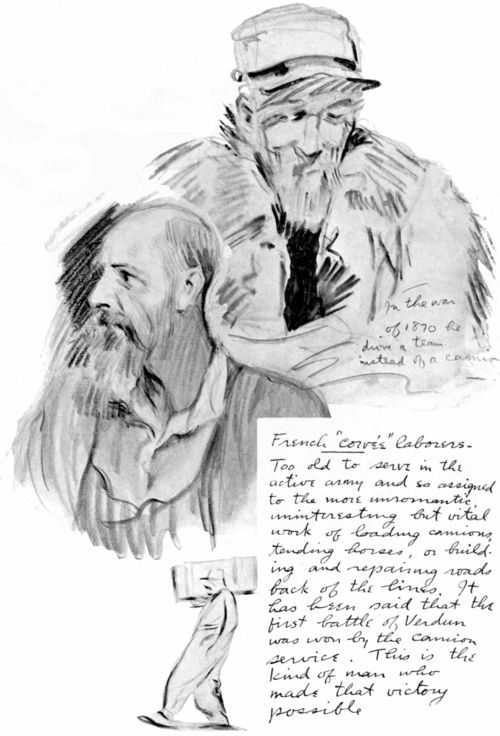 The drawing reads: "In the war of 1870 he drove a team instead of a camion. French 'corvée' laborers. Too old to serve in the active army and so assigned to the more unromantic uninteresting but vital work of loading camions, tending horses, or building and repairing roads back of the lines. It has been said that the first battle of Verdun was won by the camion service. This is the kind of man who made that victory possible." (Image Processed by Distributed Proofreaders as part of the e-book creation process for Project Gutenberg title "I was there". Author: Baldridge, Cryus Leroy (1889-1977))

Sortir la poubelle, c'est une corvée usuelle.
To take out the garbage is an ordinary chore.
.

Enjoy the following silent column! Sometimes it is good to take a break from words... and dabble, instead, in domestic work! 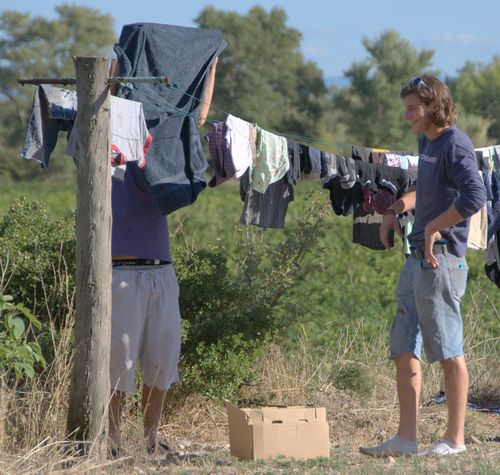 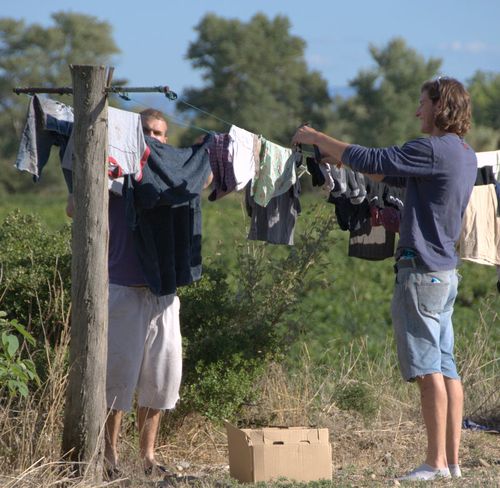 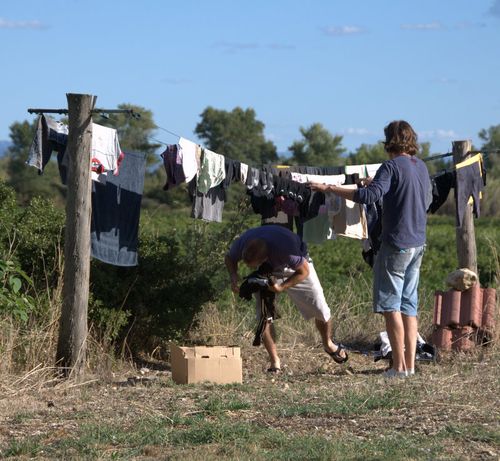 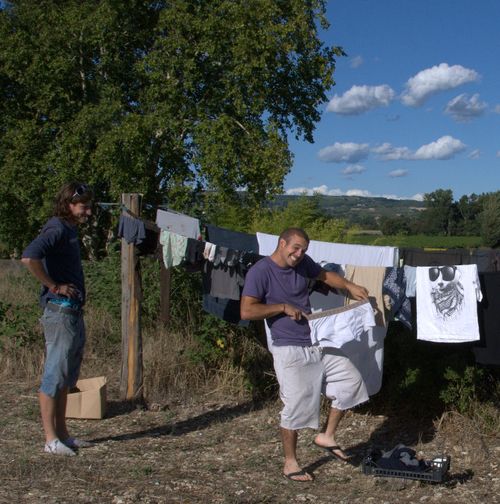 Thank you, Alexis (right) and Daniel, for allowing me to capture this slice of harvest life. 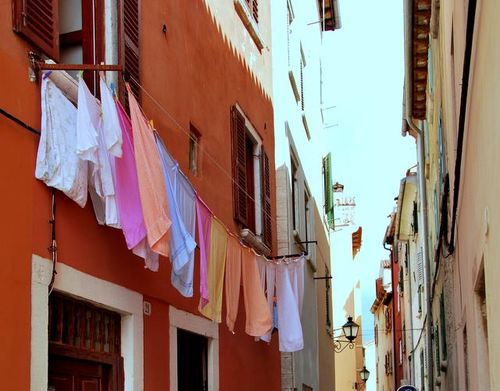