The French have a colorful word for what we scaredy cats feel. Read on. Photo of Italian door taken in Aciereale, Sicily. Get out and take some photos or keep a point and shoot camera on hand, at all times, and never miss a shot!

Pronounce It Perfectly in French with Audio CDs

The rain in Catania, Sicily had us changing our plans: forget a periple through the vine-dotted hinterland—, we might take our chances and follow that patch of open sky....

In a rented Fiat Panda, Jean-Marc drove toward the clear coastline, and we hoped the industrial zone that we were currently passing through would break, just as the clouds had, and it did. We coasted into the city of Acireale, our eyes filling with history as it draped itself across the façades of the Baroque bâtiments.

A New Year's day parade was underway and we weaved in and out of the Catanian crowds, like fish in the Ionian sea just below, and when the sea breeze wafted past we followed our noses out of la piazza, past a dozen churches and chapels....

"Ça te dit de marcher jusqu'à la mer?" Jean-Marc proposed, pointing up to the street sign, which indicated a footpath to the sea.

I am not so adventurous as my husband, but it is a new year!: a good time to shake off one's lazy ways and a good time to put other's wishes before one's own.

Halfway down the isolated path, doubts began to creep in. Strangely, there was no one else around—unless you counted the ghosts of graffiti. And where there are graffiti there are gangs, are there not?! I thought about the industrial zone we had passed through earlier... industrial zones where delinquents roam!

Stop imagining the worst! I cautioned my mind, which was ever jumping to conclusions, thanks to the news reports that had fed it over the years!

Still, I began to panic. What if a couple of drug-hungry hooligans were hidden at the end of the painted tunnel through which we walked? Switchblades came to mind. My heart thumped and, fast as that, my mind was off and running... with all of the sensational headlines that I had ever read! The macabre news came back to haunt me. It was for this very reason that I had to stop reading the newspapers last year, when the collective shock value of so much bad news had begun its debilitating effect until it seemed safer to stay in ... than to venture out.

It is thanks to almost daily telephone calls to my mom, Jules, that I am reminded of all of the good in this world, despite so much tragedy. Though my mom spends a lot of time in her room, when she does get out the door... to the Mexican streets beyond, she is shaking hands and kissing faces and smiling at the locals—and wondering why she doesn't get out and dance with life more often.
"But Mom!", I always warn her, "you should be careful where you go!" Nevertheless, by the end of our conversation, I have listened to yet another lively story of love: or what happens when you reach out and literally touch someone.

During last night's call we shared our sadness about the horrible tragedy: the shootings that took place this past weekend in our former home state of Arizona. And yet, Jules reminds me, you've got to trust others, despite it all. We cannot live in fear, which only perpetuates more of the same.

The antidote to this peur bleue, or "blue fear", may just be a red badge, or un emblème rouge: the courage to face our fears, to continue to count on and be counted upon by others, and to trust that it is, after all, a beautiful life.

Ça te dit de marcher jusqu'à la mer? = Are you up for a walk to the sea? 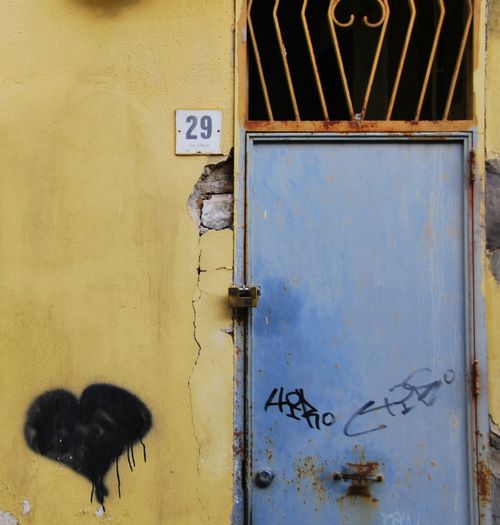 Graffiti and all, it's still a beautiful life! Photo taken in Aciereale, Sicily, Italy. 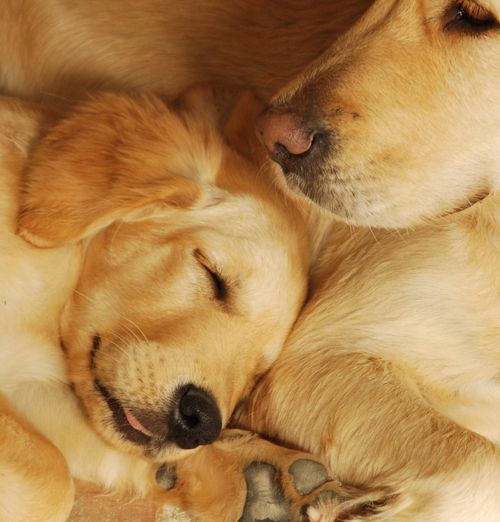 Smokey (pictured here as  a pup) recommends the story "Mémère"--about his own mom and the funny French term of endearment that they gave her as a pup! Click here. 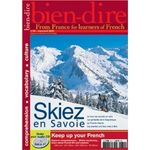 Keep up your French with Bien Dire (magazine subscription). A 52-page magazine to improve your French that you'll enjoy reading! Full of interesting articles on France and French culture, Bien-dire helps you understand what it is to be French order here. 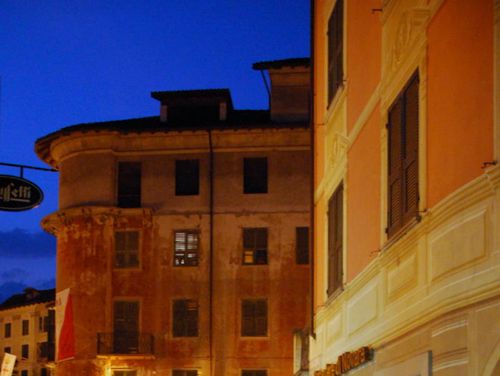 A magical hour in an ancient town: Ovada

1) the blue hour, the magic hour... crepuscule, twilight... the hour between daylight and night when the sky's luminosity draws artists out of their studios to see light's last glimmerings.

2) the hour (between 5 and 7) in which one meets their lover before returning home from work, to one's spouse

L'heure bleue, the blue hour of twilight when the sky and the earth are at the same level of luminosity, when well-to-do gentlemen throw open the shutters of their mistresses' rooms and stretch and yawn and think about returning home. -Michael Bywater, The Independent

And, from Wikipedia: "The phrase is also used to refer to Paris immediately prior to World War I, which was considered to be a time of relative innocence."  (The Blue Hour) 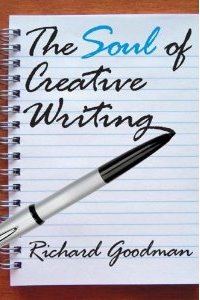 Because French often places its modifiers after its nouns, there is a kind of poetry that English cannot, because of how it works, achieve. So, for example, there is the French expression, l'heure bleue, which refers to that often shimmering time between the hours of daylight and darkness. We say “the magic hour” for that concept. It's sort of sad to write that next to l'heure bleue. French knows what to do here. French knows that the concept of “blue” is critical; that time of soft, subtle waning is about hue. French knows that emphasis should be on the idea of blue, but also that sufficient strength is given to the idea of the hour, to l'heure. L'heure bleue sounds like subtle magic. From The Soul of Creative Writing, by Richard Goodman. Order a copy.

Happy Bastille Day! Just like firecrackers streaming through the air... here and there... the following story veers offtrack (I was supposed to reveal the fashion victim of our latest story. You'll just have to "patienter"... meantime, here is an episode that took place just before the fall from fashion grace.)

Following the usual routine, having stepped out of the shower (so as not to say "douche"), I rifled through my husband's trousse, snapped up the stick of Mennen Musk. Summer in the canicular South of France requires an extra-strength solution! Not that that should keep a woman from using un déodorant d'homme in wintertime.

Having applied a generous coat of protection optimale, I reached into my overnight bag for the pretty bottle of L'Heure Bleue, the one I had selected years ago, as some choose books or lovers: by their covers. My neighbor and friend, D, had helped me pick out the perfume during a crash course on French fragrance, there in a little beauty boutique in Draguignan. How I had hesitated between "The Blue Hour" and "Coco" by Chanel, choosing the former for its name, as some choose entrees on a menu. L'Heure Bleue... it spoke to the supposedly suffering artist inside of me. She was in there somewhere, wasn't she?

L'Heure Bleue won out. The cut glass flask and its little flourish of an étiquette spoke of art nouveau, transporting the scent-wearer to fin de siècle Paris, over 100 years ago... the Paris of the past... alas!

But here, in 21st century Cassis, the air in the cramped hotel bathroom was now redolent with manly musk: a cause for hesitation.... With my finger posed on the perfume pump, I began to doubt. Might these scents clash somehow?

The muse answered as she is wont to do in situations which call for an artist's hup two...

Here, here, a suffering artist must start somewhere! Give no thought to the outcome. Spray it on—and with abandon. Remember—the idea is to continually risk rejection!

Fortified with fragrance, I stepped out of the little loo, sporting strong musk and a feast of florally feminine dew. I could have sworn my husband wavered as he walked ever so unsteadily toward me. He looked a little faint, mind you. And his face, the color of it, was... sort of... bleue. 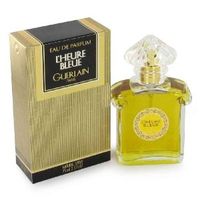 The perfume l'Heure Bleue by Guerlaine. Introduced in 1912. Fragrance notes: a floral blend of orientals with powdery undertones. Order it here. 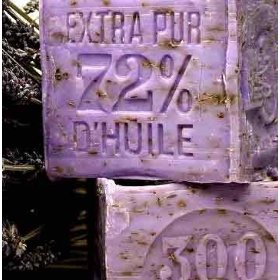 Coco Before Chanel
Audrey Tautou shines in this intriguing portrait of the early life of Gabrielle Bonheur Chanel, the orphan who would build a fashion empire and be known universally by her nickname, Coco. She journeys from a mundane seamstress job to boisterous cabarets to the opulent French countryside, possessing little more than her unwavering determination, unique style and visionary talent. Click here to order this film.

Interviews, photos, videos from our farm and beyond!

=> See a video interview from our kitchen at Scott's Alaska TravelGram!

=> Visit Pat & Lew's blog and see photos of their visit to our farm, Domaine Rouge-Bleu

=> Bonjour Paris scroll down to Counting Cicadas: naptime in the South of France 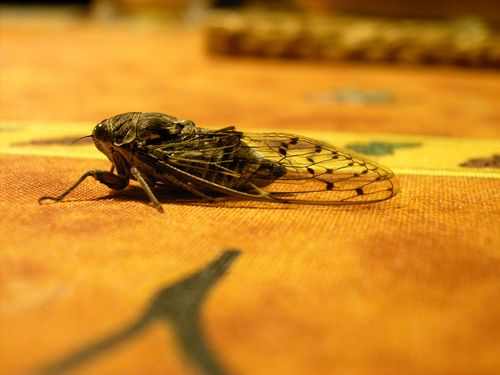 cicada photo by Dave Prout (married to one of our dear Dirt Divas, Doreen.)