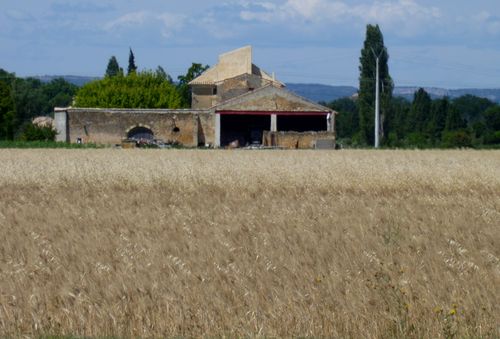 Forget bluegrass - have you ever listened to a field of wheat? (photo taken in Orange)

The Sound of Wheat

The morning Mom left I fought the urge to crawl right back into bed. I might have slept all day, behind closed shutters, in a room as dark as a smarting heart. I didn't dare "go there"; instead, there was work to do including stories to write and beds to make. Besides, who could sleep with all the racket outside the bedroom window?

I tuned into the sounds filtering in from the countryside, where the grapevines are so full of leaves you can no longer see the ground beneath their green canopy. Rising from those mysterious depths was a familiar buzz one hears only in summertime: les cigales. They were awake now... only, much too late for Mom to enjoy their song! What should have been an exciting event--the first cicadas of the season!!!--left me feeling even more saddened. What a dirty trick played by the trilling "tree crickets"! They might have had la courtoisie to appear one day earlier in time to tickle a dear mother's ears!

Following Mom's departure, it took a forced change of perspective to set a despondent daughter back on track and, finally, I had an inspiration: Wasn't that, after all, a clever way for Jules to exit: on the wings of cicada song!

In the spirit of changing perspective--and not letting a sunken heart color reality--I headed out to do some errands and discovered that the technicolor world outside my door was still intact.

There was that field of bright yellow tournesols, just outside the town of Orange... yet another first of the season.  I regretted not pulling over to snap a picture of so many sunny faces... perhaps I would get back to it?

And there was that roadside fruit stand--a one-woman show featuring a grandmother, a rickety old bagnole, and a trunk filled with abricots à gogo! It was a little too late to stop for those and so I sped on by....

After finishing errands I found myself rushing home and wondering about that change-of-perspective that I had set out on... what was the good of intention when, in the end, you were not willing to stop, and and look, and taste, and listen! I'd missed the cicadas, I'd missed the sunflowers, I'd missed the rickety trunk of apricots!

In a whirl of regret, I was struck by a brightness entering into my car from the side. I turned to its source... in time to gaze at un champ de blé.

Pulling off the side of the road I lowered the car window and wondered: Have you ever listened to a field of wheat? Stick your ears out now, écoute!, the sound is gloriously "sizzling"!

I sat silently, letting the melody of wheat, along with the lazy, late-spring breeze, envelop me. Earlier, I had rushed right on by the other splendors of the countryside, and here was my chance.... 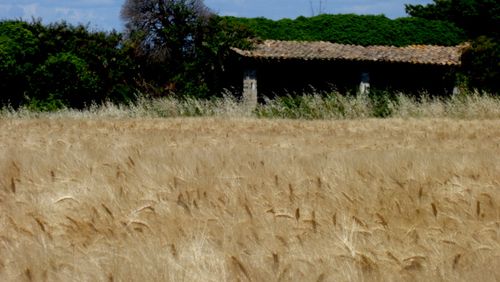 Cars sped by but it was the wheat that now captured my eyes. I could just see the braided wheat tips crowned by those bleached feathery locks. Each blade of wheat might have been a soulful singer and an endless field made for a mesmerizing chorus! I shook my head in appreciation. And I asked once again, Have you never listened to the sound of wheat? 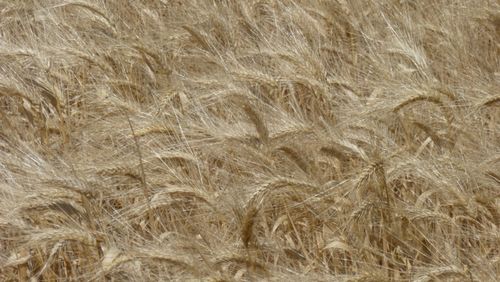 Le Coin Commentaires
Not everyone has the chance to live near a field of grass. But many other mind-altering melodies surround us. Share some of your favorite sounds with us, now. Which are relaxing? Which lift your spirits? Birds or frogs or a streaming river or the bumpings of its traveling logs? A child's sleepy breathing or a co-worker's joyful hum? Thanks for sharing your thoughts here, in the comments box.

Post note: I did go back to that apricot stand, and I regret not taking the time to tell you about the roadside sampling in which strangers stood side-by-side slurping juicy fruit and letting its juices trickle down their forearms - all the way to their elbows and their toes.

Why not forward today's word and story to a friend? Or sign up someone someone for a free French Word-A-Day 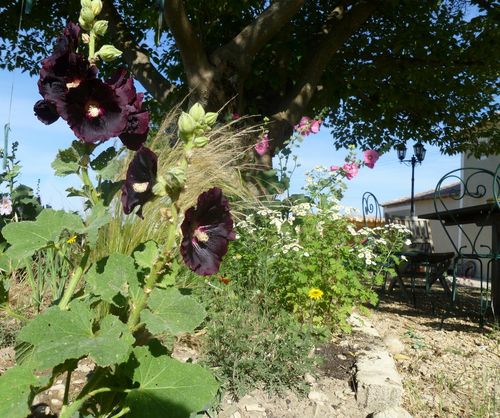 I meant to record every new flower in the garden... Never too late to pick up here with the first black hollyhock. I had wished for one for a long time!

I Heart Paris Shopper: made of recycled material. 1-Percent of the sale of this bag will support the conservation work of the nature conservancy. Order the I Heart Paris bag here.

In film:  Paris Je T'aime Paris I love You. Click on the previous, underlined link, to discover many more French films! 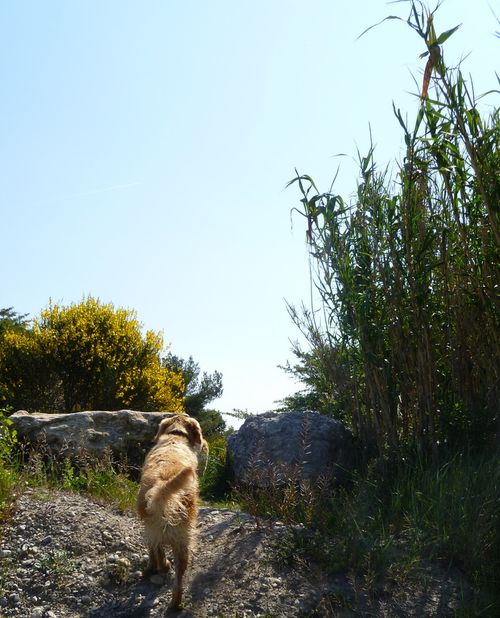 Smokey (here, headed for the river) sends his best regards and would like to humbly suggest that his photo be updated more often. See a cute baby picture here!