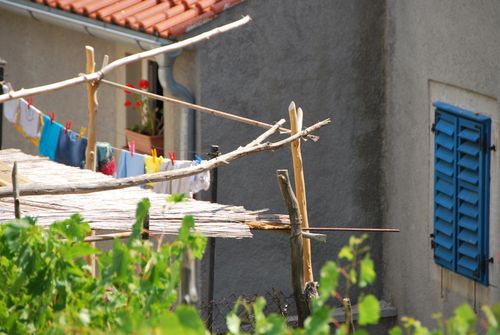 A vegetarian-friendly photo taken on the island of Cres in Croatia. (Herbivores may stop reading at this point... and check back to the next edition).

News: I will be joining two authors at the American Library in Paris, to talk about "fish-out-of-water experiences" living in la belle France. If, by chance, you are in Paris on Oct. 7th, we would love to see you at this meet-up.
.

la viande hachée = ground meat
la viande séchée = dried meat
la viande fumée = smoked meat
...do you know of any more viande terms or expressions? Thank you for sharing them with us in the comments box.
.

You may have noticed that I never write about meat. No, I am not a vegetarian: I am a people pleaser.  Having noticed that some of the readers of this word journal are herbivores, I have tried to be sparing with certain "food for thought" (careful to leave out family recipes for foie gras... or Provençal daube). But, in theme with the latest post, I will press on, or persevere, as my Grandma Audrey used to say, and try to diminish--if I can never quite obliterate--some of the more glaring personality "pépins"* that continue to torment me in my 41st year, namely, wanting to be all things to all people--whether that be a born again vegan or an extrovert.

At the butcher's yesterday I asked about steak marinade. Just as expected, the boucher was baffled. En haussant ses épaules,* he listened to me repeat my request (this time taking care with my accent) : mah ree naahd poor stek?

I sensed the butcher's pride but couldn't help feeling it was misplaced. After all, the best steaks come from Texas! And even Texans use marinade (all this is supposition on my part. I have never been to Texas, but it seems to me that the steaks of my Arizona childhood were from there... then again, maybe the cows were from Flagstaff?).

I did not share my next thought with the butcher: French steaks need marinade! A vrai dire,* I have never had a melt-in-your-mouth filet in the time that I've been in France. Not even boeuf Charolais*--purported to be one of the best, could rival the buttery filets at Ruth's Chris steakhouse back in Phoenix.

"In sixteen years I have not had a marinated steak," I informed the butcher, adding "not since moving to France. So I thought I'd finally ask -- as it has been so long."  The butcher looked at me while my daughter, hidden now--three store aisles  away--tried to get my attention : "Maman. MA-man. We need to get some cereal...."

"MAMAN, il faut qu'on y aille!"* My daughter seemed embarrassed, so I cut short my nostalgie* and my questioning... with an offer: "If I ever come across a bottle of good marinade, I'll bring you one!"

"Merci beaucoup," replied the butcher, to which I answered "de rien," only, when I looked up, I realized he wasn't addressing me--but thanking a colleague who had just delivered a new roll of wax paper. And just like that, caught up in our own dreams, we wake to find the world--even la France--continuing on with its own, fast-paced functioning.

***
Comments, corrections--and stories of your own--are welcome and appreciated in the comments box.
.

The Life of a Simple Man - I reread and reloved this book over summer vacation. You might read it in English or read it in French.

Paris door mat: makes an original gift for a francophile.

In film: "In Babette's Feast, a woman flees the French civil war and lands in a small seacoast village in Denmark, where she comes to work for two spinsters, devout daughters of a puritan minister. After many years, Babette unexpectedly wins a lottery, and decides to create a real French dinner--which leads the sisters to fear for their souls." --Amazon 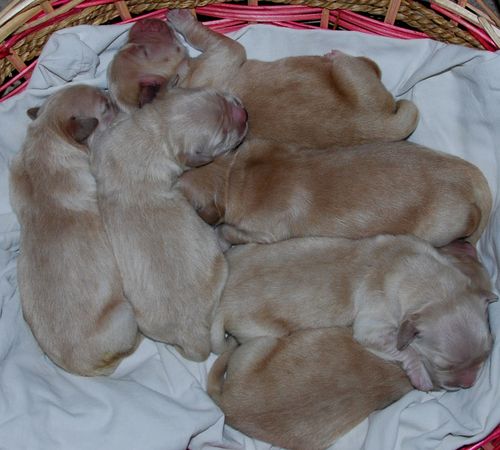 Update: the puppies, born on Sunday, are doing well! Braise is a real maman poule and is looking after her lait-swigging litter round the clock. More later... for now, enjoy the pictures. ... and look at this little "lamb". (PS: in case you were wondering, all babies were issued from Sam).