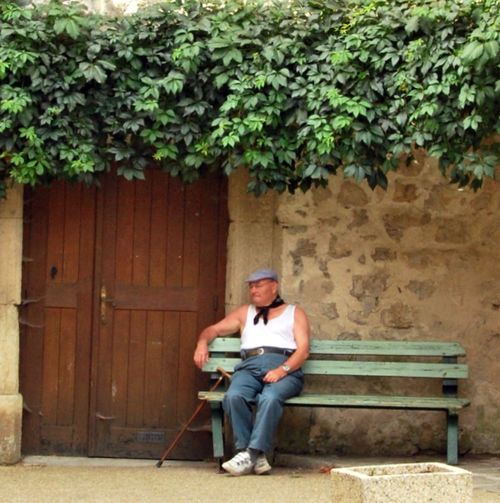 Read about "the last peasant" -- in today's story column, then forward to a friend.

Walking through the town of Buis-les-Baronnies, I experienced what long-distance runners feel: that endorphin high that comes from steady exertion. It didn't take a marathon for the feel-good chemicals to kick in: the rush came from picking up my camera again. 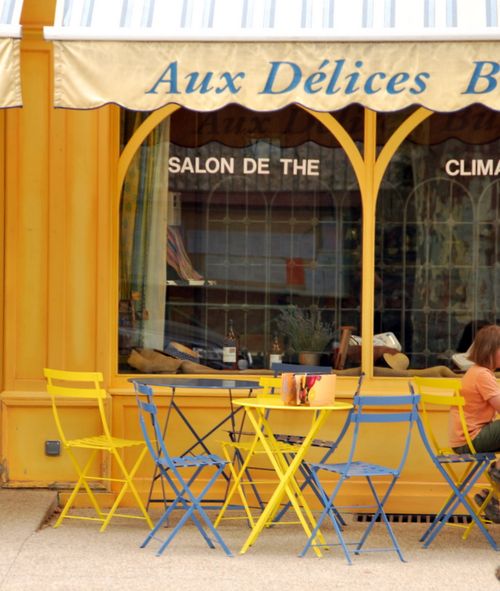 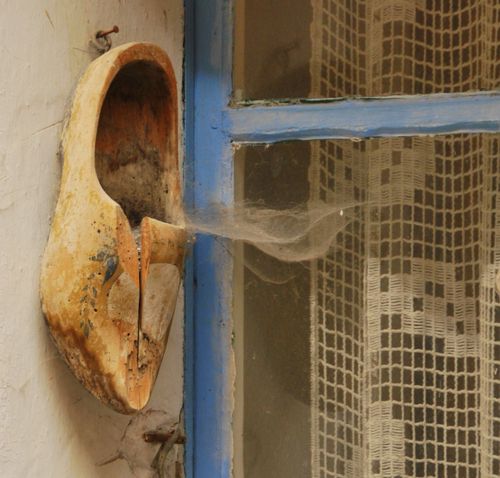 (see the full picture of this window, here)

How long had it been--six months? one year?--since I set out to capture the endangered beauty of a village and the timeless character of its people?

Ah yes, its people. This last detail explains the recent bout of camera shyness from which I have suffered. I had had a few run-ins with the French -- only two, to be exact (once while photographing a pot of geraniums and once while zooming in on an old wooden shop sign. I hadn't seen the woman seated deep in a leafy courtyard, behind the potted flowers... and I hadn't seen the grand-mère in the window above the artful wooden shop sign. I didn't see them because my lens was not trained on others, but on objects. I knew better than to point my camera's objectif at a person, but I couldn't help what transpired when all my attention focused in on an object, blurring every detail around it. It wasn't until the blurry "detail" began jumping and wagging an angry finger (in the periphery of my lens!) that I noticed the angry, accidental models!

In the town of Buis, I re-experienced the drug of photography. Holding a heavy appareil photo felt so good: curling one's fingers around the body, pulling the unit up to one's eye, peering through the viewfinder... seeing life through the narrow lens helps one focus on the intricate details that are so often missed. I love the feel of my hands twisting the zoom lens... my finger pushing down on the release button. Finally, there's nothing like the sound, or déclic, of a capture! The comforting click that records Here and Now, while Father Time spins his heels beyond the lens.

Zigzagging along the streets of the mountain community, I lowered my lens each time I was eyed by a curious citoyen or shopkeeper. There was that feeling that at any moment I'd be caught. But it isn't illegal to take pictures! I reminded myself, pressing forward in my photo journey. I remained discreet, snapping pictures quickly.

Rounding a bend I ran into a living monument. That Frenchman who encompasses the past--its traditions, its romanticism... while living and breathing in the present! ﻿﻿

I knew I had to have a picture of this man (with his neck-scarf and beret... his débardeur and cane!), but the angry women's voices (from behind the geranium pot and, again, from above the wooden sign) came back to haunt me, "Pas de photo! PAS DE PHOTO!"

I stalled at the corner, eyeing le monsieur. He was as charming as any potted geranium, with as much character as any chipped and peeling shop sign. I would have traded any photo in my camera's archive -- all of them!... pour lui....

I thought about stealing away with his photo! I could do the ol' "snap-n-run" technique... or the "pretend to be photographing the horizon" scheme (only to zoom in on the subject). But I did not have the energy for deceit, and so I quit plotting.

I began to turn on my heels, when something inside said: Just ask his permission, Dummy! And, fast as that, I beelined it over to the bench!

"Pardonnez-moi, Monsieur.... Would you mind if I took your photo?" And then, not wanting him to feel like the object of some elder scam, I introduced myself. "I live nearby... I am just on my way home from the horse camp, where I left my daughter for the week".

The man recognized the name of the centre équestre and, voilà, we had a contact in common. I told Monsieur that I loved to take photos of France, especially because it is changing so quickly. "Sometimes," I explained, "I return to a village, only to find fresh paint over a perfectly charming publicité -- the old painted advertisement gone forever."

"I am the last peasant." His words struck me as I sat listening to his story. In the old days, he walked eight kilometers to the field and back. Work, as a child, consisted of harvesting gladiolas, "un travail d'esclave"...  As a teenager, he would work in the olive orchards, in the verger (picking abricots), and he would harvest grapes ("pour la maison").

His brothers and his sisters worked just as hard, lest his mother remind them of their standing. "Elle ne nous a pas gardés pour notre haleine!" he explained.

"She didn't keep you for your breath"? I had never heard such an expression but it didn't take a dictionary of idioms to understand the harsh reality behind it: the mother had mouths to feed! All members of the household were required to be industrious. She wasn't keeping the kids "for their breath", or for her amusement. She had work to do!

I thanked Monsieur for his story and for his photo. It was time to move on (besides, I noticed a shopkeeper, up the way, who seemed to have a protective eye on the venerable villager). I didn't want to cause anyone concern. And so our conversation came to a close.

But Monsieur seemed so alone... I wished I would have asked him what became of his siblings, the ones that worked as hard as he did as a child. I only learned that, after he retired, rest would not be his reward. He left the fields to begin caring for his mother. "It is the hardest job of all to take care of another," Monsieur admitted. His words had me thinking about the old Eastern values concerning caring for our parents. A friend once reminded me:

We care for our parents until they cannot walk anymore, at which point we carry them over our shoulder. We don't question it. More than our duty it is our honor to care for the elderly.

But the mental and physical testing of our strength often blurs our vision and our very values. Monsieur and I sat side by side in the silence, lost in thought. Only a deep, long sigh reminded me of Monsieur's presence.

I thought about the sad irony. Monsieur's mother did not have the luxury of keeping her son "for his breath". But he did keep her... until her very last. 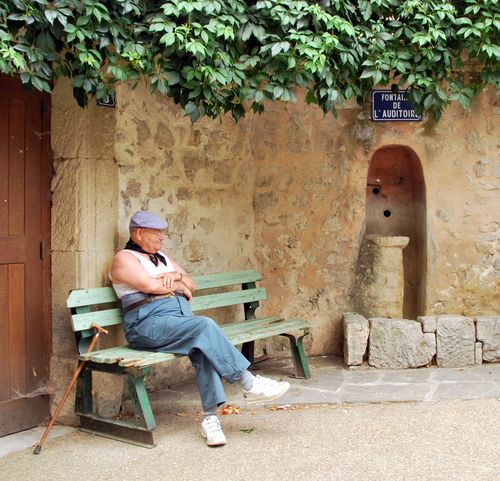 Post note: I was surprised that Monsieur called himself a "paysan" as I have heard that the term can be pejorative. Not only did Monsieur refer to himself as a paysan, but he said, more than once, will all sincerity, that he was no more than "un petit paysan".

Comment on this edition or answer the following question: What are some endangered things that you'll regret one day no longer seeing (in architecture... in local characters... wildlife? Endangered traditions or valtues?) Click here to leave a comment.

"Tricoter" (To Knit): Meet the woman who was keeping a protective eye on "the last peasant". Click here to read or review the story and to see the photos.

An an all-time favorite book--one I highly recommend! I hope you'll order a copy of The Life of a Simple Man and enjoy it this summer! Click here to read the reviews.

Thank you for visiting our sponsors!

LES PORTES TORDUES (The Twisted Doors): The Scariest Way in the World to Learn and Listen to French! Check it out (if you dare).

pour lui = for him

One way I learned French was by listening to the classics (check out songs by Charles Trenet). Or you might prefer something more modern, like  Tour de Charme by Patricia Kaas 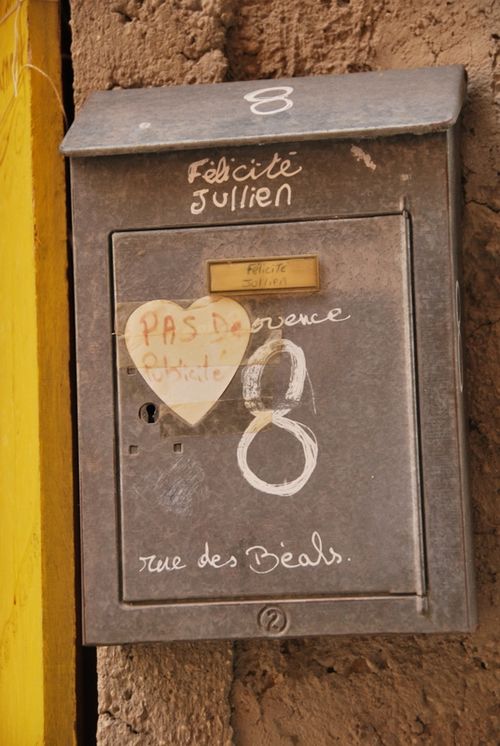