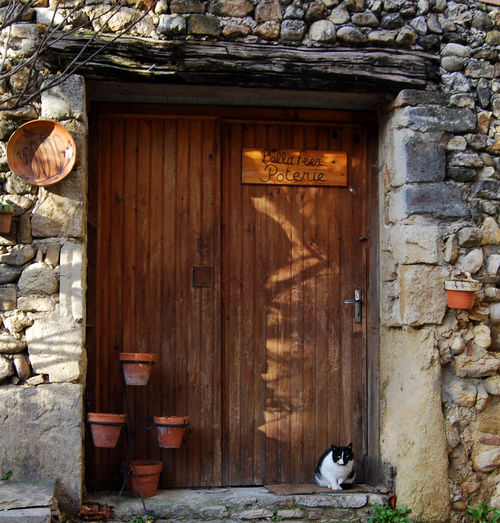 Photo taken in Visan, land of a million cats! Whether slightly color-blind, like this black-and-white cat, or completely non-voyant, Louis Braille believed that the gift of literacy belonged to everyone. Read more about this remarkable Frenchman who, as a child, would change the world.

We were at the breakfast table when the usual "Ça—c'est ma place!" and "Quit hogging the jam!" conversation turned into a thoughtful hymn... on blindness.

"Did you know," I began, "that the person who invented Braille was not much older than you when he created the system that would allow the blind to read?" I said to my son, who balanced a near-empty jar of jam over a slice of brioche—this, while glaring at his soeur cadette.

"What is "braille?" Jackie wanted to know, repeating the word as she had heard her Anglophone mother pronounce it (BREL).

Jean-Marc, who had caught the tail end of the conversation, piped in.
"Brel est un chanteur."
"No! I'm not talking about Jacques Brel!" I felt my feathers ruffling, and only two minutes into an uncharacteristic history lesson.

"She means 'Braille'," Max explained, clearing up any confusion by offering the French pronunciation of "Braille" (which, to my surprise, was "BR-EYE"!). Next, my son popped up, and hurried over to the cupboard to fish out a box of sucre.

Max quickly turned the box of sugar to its side, and pointed out the raised dots.

"I had never noticed that before!" I said, running my finger down the side of the box, over the "lettered" relief. Are you sure that is Braille—and not some kind of bar code?"

On second thought, why wouldn't it be Braille, and why, by the way, weren't the jam jar and the milk carton sporting raised dots, too? With that, I ran my finger across all of the packages along our table top. That is when I realized that the box of sugar was the only package that could be read or identified by a non-voyant!

A sense of shame washed over me as I experienced another taken-for-granted privilege: that of correctly identifying a pot de confiture or a carton de lait. My guilty conscience automatically reacted, with the clearing of the throat and a swift returning to the former subject.

"As I was saying... it was a child who created this extraordinary system...." I tried to think of what to say next, but my mind was vaguely troubled. Thankfully, my daughter spoke next.

Corrections, feedback, and stories of your own are welcome here, in the comments box.

If we were talking about blindness at the breakfast table this morning, it is thanks to Kathi Koegle, who had written me a few weeks ago, inquiring about "off-the-beaten-track villages" that one might visit in France. In the email exchange that ensued, I learned that Kathi, who works for the Wisconsin Council of the Blind & Visually Impaired, had just been in charge of a bicentennial birthday party for Louis Braille.

It occurred to me that she might write an article for us all to enjoy and, when I asked, Kathi kindly obliged. Here, now, is her mini-biography on Louis Braille.

This year marks the 200th birthday of Louis Braille, the man who invented literacy for blind people.

Braille was born in Coupvray, a tiny village about 25 miles east of Paris. The youngest of four children, he lived with his parents in a modest stone cottage in the village.

Braille's father was the local harness-maker. One day when he was three years old, Louis was at play in his father's workshop. A fateful accident and subsequent infection rendered him totally aveugle.

At the age of 10, Braille earned a scholarship to the Royal Institution for Blind Youth in Paris. It was the world's first school for blind children. Louis was an outstanding élève, and he excelled in every subject. He also became a fine pianist and an accomplished organist. 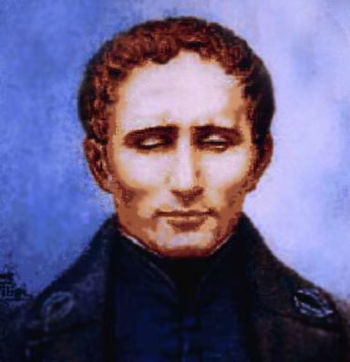 While attending the Institution and yearning for more books to lire, Braille experimented with ways to create an alphabet that would be facile to read with one's fingertips. The system of raised dots that he devised--at age 15--evolved from the tactile "Ecriture Nocturne" code (invented by Charles Barbier, an artillery captain in the army of Louis XVIII) for sending military messages that could be read on the battle field at night sans light. Two years later, Braille adapted his method to musical notation.

Braille accepted a full-time teaching position at the Royal Institution for Blind Youth when he was 19. He taught grammar, geography, arithmetic, and music.

Sighted teachers and officials were slow to accept Braille's new method. It wasn't until 1844, eight years before he died, that the value of the Braille alphabet was officially recognized. Then, one after another, countries around the monde recognized the benefits of braille. Braille has now been adapted to more than 200 languages and dialects around the world.

Louis Braille died of Tuberculosis two days after his 43rd birthday. In 1952, his body was moved from a cemetery in Coupvray to the Pantheon in Paris to lie with other great women and men of France.

The stone house where Braille grew up is now a museum, and the street on which it stands is named Rue Louis Braille.

On the mur of the maison is a plaque that reads:

Translation:
In this house on January 4, 1809 was born Louis Braille, the inventor of the system of writing in raised dots for use by the blind. He opened the doors of knowledge to all those who cannot see.

..................
Author bio: Kathi Koegle is Outreach & Development Manager for the Wisconsin Council of the Blind & Visually Impaired. A former French teacher, Kathi and her husband are making plans for their third trip to Provence.

If you enjoyed Kathi's story, please join me in thanking her by letting her know in the comments box.

You may also leave her a personal message, here: kathi [AT] wcblind [DOT] org

In children's books: "Louis Braille, The Boy Who Invented Books For The Blind" & Louis Braille: A Touch of Genius

Read about Therese-Adele Husson:  a young blind woman and writer from provincial France

Reflections: The Life and Writings of a Young Blind Woman in Post-Revolutionary France

In the 1820s, several years before Braille was invented, Therese-Adele Husson, a young blind woman from provincial France, wrote an audacious manifesto about her life, French society, and her hopes for the future. Through extensive research and scholarly detective work, authors Catherine Kudlick and Zina Weygand have rescued this intriguing woman and the remarkable story of her life and tragic death from obscurity, giving readers a rare look into a world recorded by an unlikely historical figure.

Reflections is one of the earliest recorded manifestations of group solidarity among people with the same disability, advocating self-sufficiency and independence on the part of blind people, encouraging education for all blind children, and exploring gender roles for both men and women. Resolutely defying the sense of "otherness" which pervades discourse about the disabled, Husson instead convinces us that that blindness offers a fresh and important perspective on both history and ourselves. Click here to read more about this book.

In French film: The Double Life of Veronique

Kathi's photos taken at the celebration: 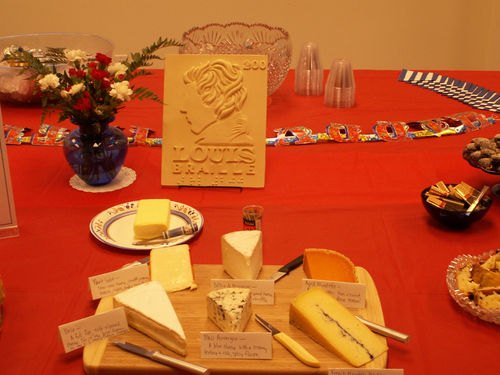 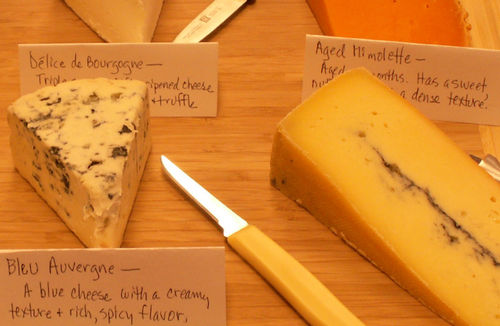