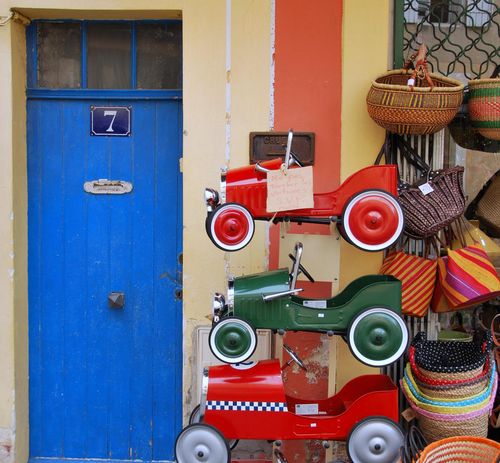 "Traffic" in the town of Vaison-la-Romaine. A car lover will appreciate today's edition, which focuses on a unique off-road vehicle, the UMM. Thanks for forwarding the post on to a friend!

This morning Mr Pottelet, the beekeeper, came to deliver four hives.  Jean-Marc met the apiculteur at the edge of the gravel driveway, where the two men took a steep passage that leads to several hillside agricultural terraces, where Jean-Marc will plant his vineyards.

I hurried to dress, grabbed my camera and rushed up the other side of the hill, just behind our house, but it was too late. The men were already headed back down the hillside, having placed the buzzing ruches.

Zut! I'd missed the bee-installation. Never mind. My attention soon caught on the unique vehicle driven by the beekeeper. I watched the tail end of the rover disappear down the steep path, at which point I hurried down the stairs beside our house, to our driveway, where the quatre-quatre was now arriving.

Shaking the beekeeper's hand I couldn't wait to ask about his four-wheel drive.  "An UMM?" I questioned, amused by the metal lettering on the front of the car.

Lately I've been fascinated by the Citroën Méhari and the history of this off-road vehicle. The beekeeper's 4X4 looked like a mix between a Méhari and a taller landrover. 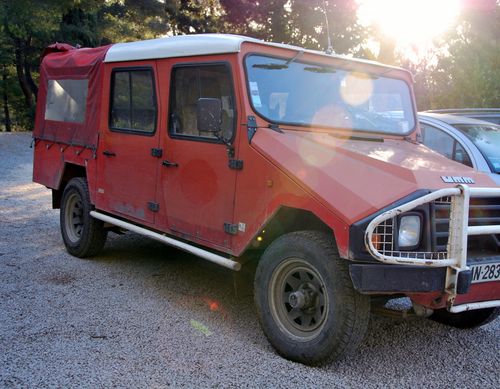 The most famous UMM is probably the one that transported Pope John Paul II in one of his visits to Portugal. --Wikipedia 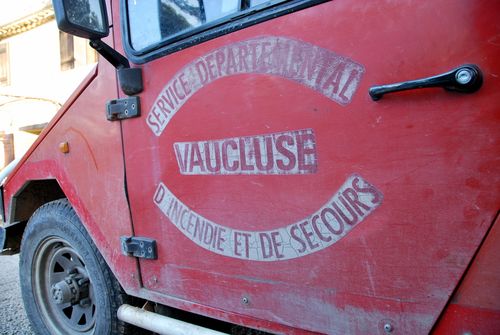 The design was sold to the Portugese who manufactured the UMM for the public until 1994. Currently, they are made for the military and utility services only. --Wikipedia The apiculteur's UMM was used by the fire rescue department

I circled around the tractor-truck, wishing more than ever that it were my own. Jean-Marc has wanted to trade in my Citroën C3 but, being only 8 years old, it is hard to justify the need for a new car.

"Does it get good gas mileage?" I asked the beekeeper, who told me the diesel engine doesn't consume much.

"But it can't be that comfortable," I pointed out, "how was the two-hour drive getting here this morning?" 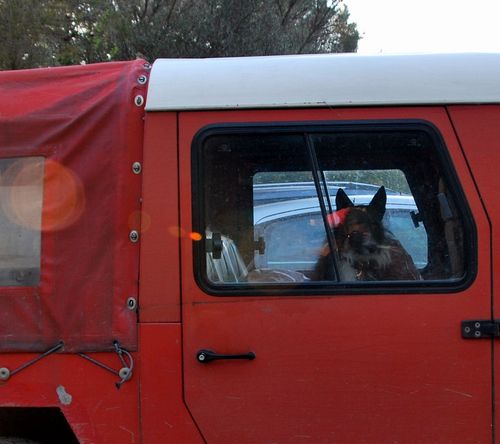 Most of the known Portuguese off-road drivers started their careers driving UMMs. --Wikipedia (the off-roader pictured beyond the window is called "Kek". He's the apiculteurs gentle Corgi/Westie mix... or was that a Jack Russell/Westie mix? 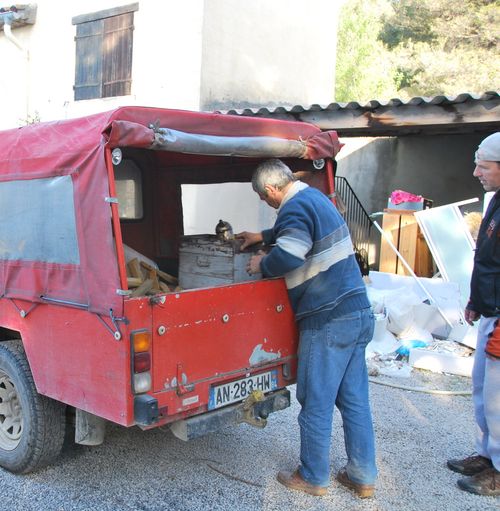 And it must be quite useful for him, I thought, what with the four buzzing hives he was able to transport.

I began to wonder how I might justify the need for such a vehicle of character?... Two golden retrievers and a steep and winding driveway... was that enough to justify it?

I wanted to know what a car like this costs. The beekeeper said he paid around 4000 euros after finding it in Le Boin Coin, the local classifieds.

4000 euros? By now Jean-Marc, who had been anxiously following the conversation, was looking relieved--interested even.  What with so many French Riviera women driving little Mini Coopers ($$$), he might count his lucky stars that his wife's set her sights on something grander. 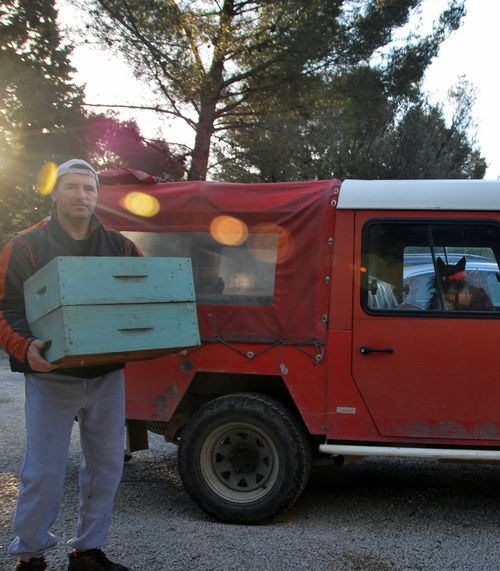 Now all my husband has to do is sell several hundred jars of honey to pay for it. Better yet, maybe he can trade for it? Wine and honey for a lemon? But this baby is no lemon! 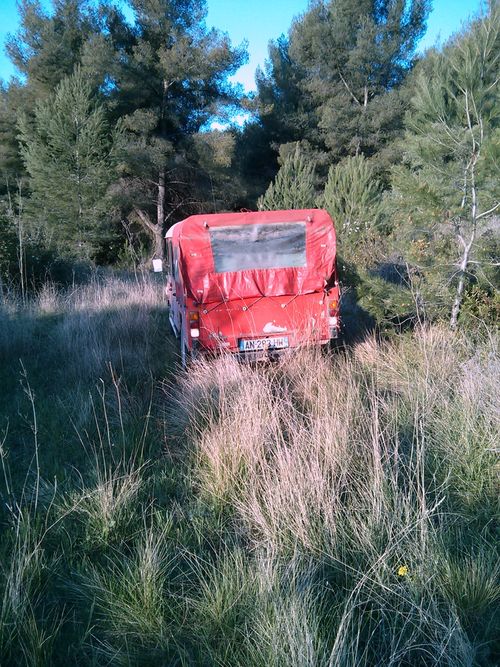 The UMM rover arriving high up on the third terrace. The beekeeper, who also has 12 donkeys, tells us these dependable workers would be ideal for clearing this land.... Don't tell Mama Jules, or she'll pass out in excitement. After a gypsy trailer, or roulette (or maybe even before it), she dreams of having a donkey. 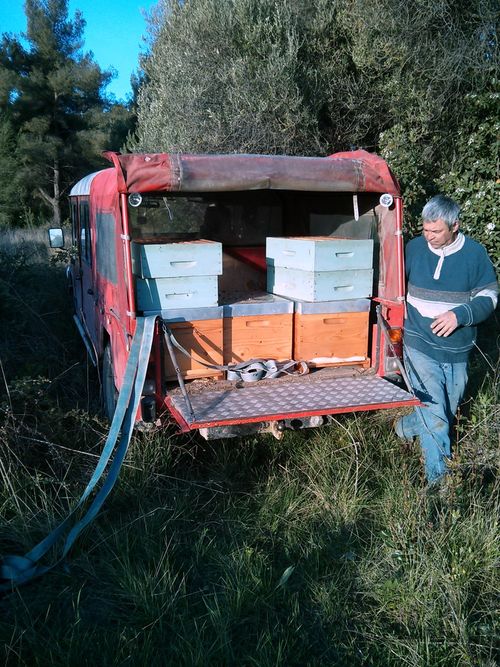 Move over Popemobile... UMMs are THE beemobile! 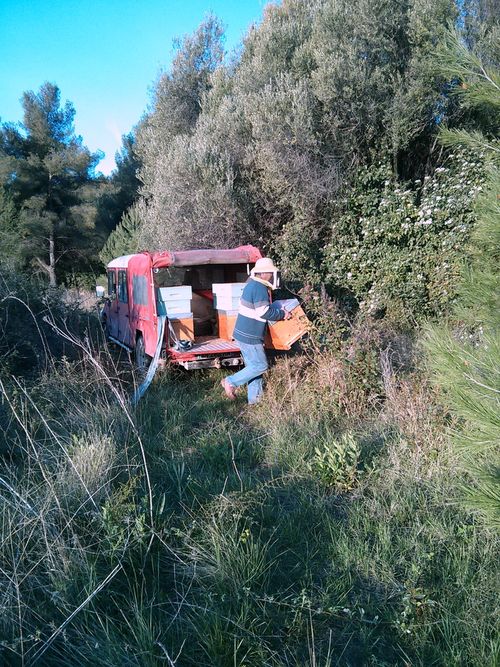 Back to work now.... Don't forget to forward this post to a car enthusiast (or even bee enthusiast!) Thanks. (P.S. Just look at all the work there is for a donkey. Is this justification enough??)