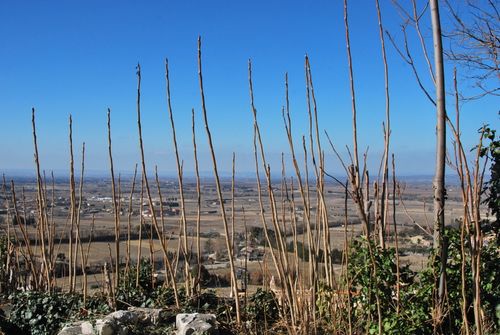 "Leafless Lookout". Overlooking the Rhone Valley, from the perched-on-the mountain town of Séguret.

Chief Grape will be in Portland on 03/22 and 03/23! Check out some of the other cities he is visiting, click here.

: to take for granted

Learn another way to say "taking for granted" in the following story...

Getting a little too cozy in a foreign language: A solution

You may dream of expatriate life and believe that living in a foreign land is enough to improve, if not perfect, your foreign-language skills. Believe me, this isn't always le cas! Take my Mom, for example. She has lived in Mexico for 18 years... and yet she still speaks with her hands, using gesturing to get by...

I'm not so rebellious as Jules, but I can be just as lazy in language learning. Given the choice between studying French grammar and ...voyons.... scouring the toilet--I'd gladly reach for the scrub brush!

Thank goodness for all those grammar drills back in school; if it weren't for the stress and menace of exams, I would have never gotten around to doing the work, like understanding the subjunctive or learning how to conjugate verbs. My French pronunciation was never better than when I was actively studying the language back home in Phoenix, Arizona!

Once I moved to France, I began to relax. That is, I began to take for granted the French language, which was buzzing all around me. No longer did I jump at the occasion to overhear a French conversation; I could now tune in and out at my leisure. Mostly, I tuned out (late-night dinner parties and the cacophony of French that go along with them, made my head ache. Trop c'était trop! and besides, what with all the French swirling around me, chances are it would stick subconsciously. Wouldn't it? Even just a bit?).

By taking for granted the fact that I had France at my beck and call, a curious thing happened--I began to resemble--linguistically--the proverbial housewife that has let herself go...  Whereas I once wore a pretty peignoir around the house, I now threw on mismatched sweats (my silk robe represented those lushly rolled French "Rs"; my mismatched sweats represented nouns and their forgotten--or never learned--genders, as well as all the overall sloppiness in my current French-language life!).

Though I may have let myself go in the language, my French husband and Francophone children haven't let up; daily they correct me. Only, lately, I feel their exasperation and frustration. Tu peux au moins faire un effort!", They sometimes complain.

Ce n'est jamais trop tard!
And so I have decided to clean up my act! I hope to surprise my husband, Chief Grape (and Chief Language Supervisor) when he returns from his business trip. But, as in love, seule, je ne suis rien!

I have many language books collecting dust on my shelves. I could learn grammar--even pronunciation--by cracking open any one of these tomes. But I am a sensually motivated learner: to see and hear and touch -- are necessary to me in learning.

Two weeks ago I logged on to Yabla, a longtime sponsor of my on-line language journal. Yabla recently offered me a limited trial of its language program and I decided to log on and benefit from it... before the période d'essai ran out!

Since, I have put in 15 minutes daily toward a language makeover.  I decided to get grammar out of the way by devoting the first 5 minutes to the "lessons" section. Yabla's grammar lessons must be designed for impatient learners like me--thankfully they are brief! The informal lessons are chatty and the titles are amusing, hence inviting ("When Adverbs Get Cozy With Adjectives"..."Whatever Will Be Will Be")--helping to encourage grammarphobes to have a look at the lessons, which include tips and hints for pronunciation.

Under the "Lessons" tab, there are sections on vocabulary and expressions (I swiped today's term: "prendre pour acquis" from there! For how many years had I used the expression--and wondered about the French translation? Yabla gives three French equivalents for "to take for granted"--including the one used in common, everyday speech: considérer comme acquis. After discovering three different ways to say the same expression, I doubt I'll forget it).

Once past the grammar, it is easy to love Yabla's other tools for language learning, namely videos à gogo! Yabla offers a wide range of topics--photography, politics, daily life--to be viewed among a range of programs: news, documentary, music video, street interviews...

I loved watching an interview with the famous photographer Cartier-Bresson (under the "People" category). In it, I learned all about a photographer's genius; meantime, Yabla ingeniously taught me expressions "être aux aguets" ("to be on the lookout") and memorable quotes, such as Cartier's own "Viser juste, tirer vite et foutre le camp!" ("Aim true, shoot fast and get the hell out!"). The quotes and expressions are highlighted in the bilingual text which runs beneath the video. Tip: A helpful tool is the flashcard option: when you click on an unfamiliar word, Yabla saves it on "flashcard" to be reviewed--and mastered!--at another time.

Another effective tool is the "listening games" section, in which you hear repeated the various sentences in the video. At the same time, you see a sentence, this time with one word missing (up to you to fill in the blank)! Sometimes I missed words because of the speaker's accent (Tip: Yabla notes, at the beginning of the video, whether the speaker is talking with a French or Canadian or other accent), other times I failed to recognize the spoken words due to the speaker's vitesse. No matter how many times I hit "phrase repeat" (another otherwise good tool), I couldn't understand certain words which ran too closely together). I had many duh, or claque-la-tête moments, when the written words were revealed at the end of the game.

The handy-dandy "slow" button allows listeners to ralentir the speaker (particularly helpful when the videos feature kids, who speak fast and pepper their speech with argot! (By the way, this is when the running transcript, just below the video, really comes in handy! I especially enjoyed learning a new synonym to "radin", or "miser": "crevard". I eagerly tried out the word, just the other day, among adults... Manque de chance: they were unfamiliar with the word. Luckily, my friend's 22 year-old son showed up in time to easily recognize and verify the new-to-us the term: "Ouai, c'est quelqu'un qui est près de ses sous--un avare, un radin!" All this to say that Yabla definitely has current expressions covered!

Hands down, my favorite video was the two-part series... featuring Chief Grape! In the video "Provence Domaine Rouge-Bleu" I saw our farm "sur grand écran" so to speak. There were even some clips of our dogs, Braise and Smokey, and--yikes--of our messy front yard (next time I'll get out the broom and pull a few weeds). But the plus for me was that I didn't need to hit "slow" or "phrase repeat" -- I actually understood everything my husband was saying! I wonder whether this means I am making progress?

The question remains, figuratively speaking: Will I be wearing that pretty peignoir when the Chief returns? Or will he still see me in my "linguistic" sweats?

To respond to anything in this post, click here. Hint: the comments corner is a great place to ask questions about French and life/travel in France. Your collective knowledge and helpful answers to each others' questions are appreciated!

P.S.: Re the photos at the end of this edition... I have a feeling there'll be questions! Would some of you who have experienced it (Meredith, are you reading?) enlighten us on what "carnivale" is in French schools? Thanks for sharing the info in the comments box!

seule, je ne suis rien = alone, I am nothing 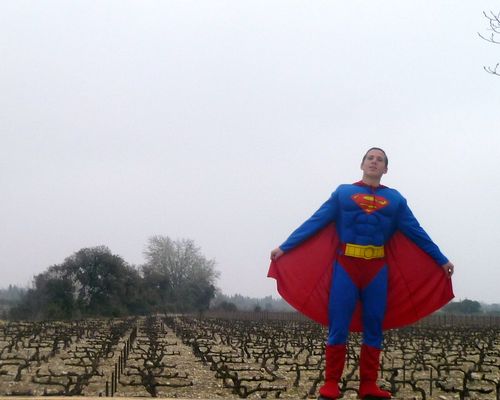 16-year-old Max dressed up for "carnaval" today. No, I was not a "crevard" -- I forked over the 30 euros for the costume rental! 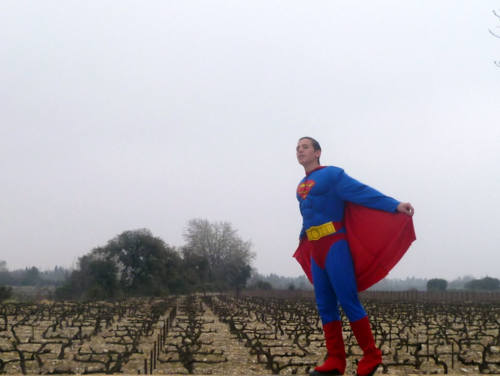 ...Though I did suggest that he wear it every day--for the full 4 days--until we got our money's worth out of it! Perhaps he could even land a gig? then we'd make back some of the moola! 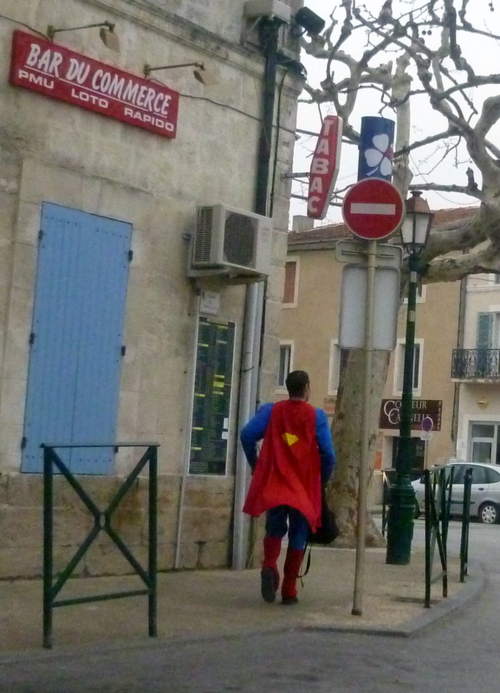