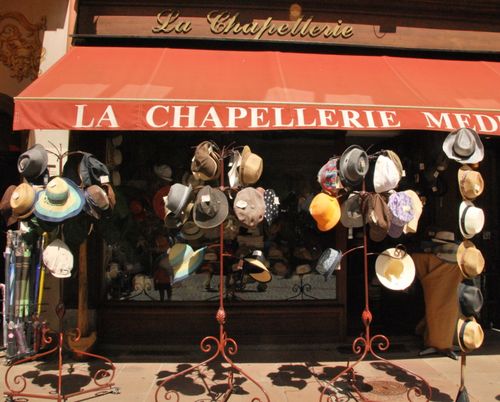 Hats off to readers! Each chapeau represents the original character of those who read this blog-newsletter. Which hat are you? (I think I'm that gray one, upper right. Although, lately, I appreciate the two-tone blue one--needed sun protection!!--over there on the upper left). In today's story--meet a few of these unique personnages... and enjoy the unlikely story of their "retrouvailles"!

Meet with Jean-Marc this month--in Brooklyn or Manhattan-- during his 2012 USA wine tour: click here to see all the cities Chief Grape will be visiting

la retrouvaille = finding again, meeting again, getting back together

This is the story of Julianna Palazzolo and Sandy Zeoli, the two friends who reconnected through "French Word-A-Day"....

Things to keep in mind: both girls had unusual last names

Julie and Sandy were friends and classmates at the Thomas A. Edison school. Both liked to write short stories. Julie's were much better (Sandy thought that then and still thinks it now). We went to each other's houses all the time, went to each other's birthday parties, and were good friends. 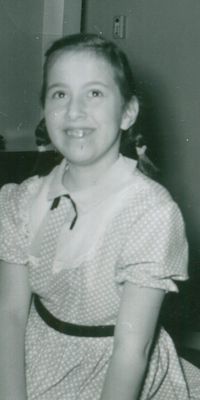 Julie (pictured, left) moved away to Michigan. She and Sandy lost contact, although Sandy thought about her on and off and wondered where she was. Occasionally if she were traveling, she would check phone books for Julie's last name. Sometimes there was a name that was close, but not the same. Or, right last name, but father's first name didn't match. 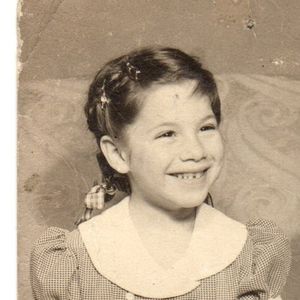 From Michigan, Julie moved throughout the country, married and divorced twice but never had children, settling finally in the American Southwest.

One day in the summer of 2010, Sandy went to the local library and found a book called Words in a French Life. Having studied French in high school and college, she picked up the book and loved it. She saw the author had an email newsletter and signed up for it in July 2010 (Sandy checked her email file, as she has saved all the emails Kristin has sent since she signed up for it). As a bonus, she also searched and found other Foreign Language "Word-A-Day" emails, as Sandy loves learning new languages. Hoping someday to go to Greece and read and understand a little, she has taught herself some Greek and now receives a Greek Word A Day email.

But, back to our story. In late 2011 Kristin Espinasse, the American woman who fell in love with French, France, and stayed there to marry a French man and raise her children there, and who writes of her life in the "French Word A Day" email decided to take up the challenge to self-publish another collection of her letters on life in France.

Book is published. Sandy buys a copy. Reads through the various stories and then glances at the "thank you's" at the beginning of the book. One name immediately jumps off the page. There can't be 2 people called Julie P. The last name is just too unusual.

So, Sandy writes to Kristin, tells her that she thinks it might be her long lost friend, specifically mentions her (Sandy's) maiden name, and other info only Julie would know and asks if Kristin could pass on the info to Julie. A day passes and an email comes from Julie P entitled "C'est moi!"


We are now catching up on our separate lives and maybe one day soon we will be able to get together in person and share some stories.

Our thanks to Kristin for being the matchmaker. And, in a very modest way, to the Internet, which allows old friends to connect once again, but without the shared interest in French, etc. and Kristin, in particular, would never have happened.

Comments Corner
I would love to read your reaction to this wonderful "retrouvaille"--or maybe you have a story to share? You can leave a note in the comments box.

A note about the previous two photos: I had some technical difficulties uploading these images, which were also a bit small. (By the way, that's Sandy, upper right, and Julie, right). Perhaps we'll have the lucky chance to update this post... when Sandy and Julie finally meet up again in person! Fingers crossed. 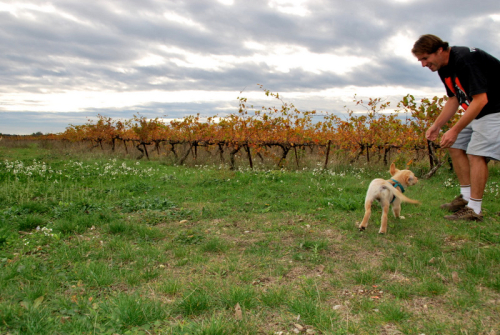 "Les Retrouvailles" (homecoming). Click to enlarge this jubilant image! This photo is two years old. It was taken when Smokey returned, supercharged and satisfied, from "Camp Sully" in Vaison-La-Romaine. Witness here Smokey and Chief Grape... and their joyful reunion! Mille mercis to Mark and Ellen for taking such good care of Smokey and Braise!

I was grateful to learn a helpful French pronunciation tip... after reading the recent reader comments (about, of all things, How Not To Do Laundry like the French). Thanks, Jim, for the educational pause... during the heated debate about whether to include socks with bras. (Come to think of it, while some of us don't wash socks with bras, we might have worn them together at one point... Sorry for getting off topic again!)

I'd like to comment on the pronunciation given for "bâcler." You wrote it as "bak-lay." Please forgive me for my narrow focus, but the correct form is "ba-klay." Unlike English, French is an open-syllable language, where a syllable ends in a vowel whenever possible. Most Americans fail to pronounce "he is" correctly in French. A native speaker always says "ee-lay" but most Anglophones say "eel-ay" which is incorrect. I know I sound like a cranky retired French prof, but I do think the basic linguistic distinction is important.