Reader Gary McClelland shares another speedy French adventure with you today... read on and discover something fun to do in Provence (or maybe chez vous?) Also, an extra sound file for you today: Jean-Marc has recorded the vocab section following Gary's story. Don't miss it!

Occasionally I receive an e-mail asking me to tell the story of meeting my French husband, Jean-Marc (affectionately known as "Chief Grape"). For anyone interested, please know you can read the whole story in the introductory chapter to Words in a French Life ... (at under $15, this book makes an excellent gift for a Francophile!) Here is an excerpt:
.

Back in Aix, I was dancing the night away wholly devoted to study when I met my future (French) husband. He barely spoke to me the night we met, but his first words to me -- before even "Bonsoir" -- were "Il faut qu'on se revoie," we must see each other again. His dramatic greeting stopped time. When he handed me his card, I thought I had stepped into the pages of a fairy tale. Beneath his name, "Jean-Marc Espinasse," were the words "Roy d'Espagne"....

Thanks for ordering a copy of Words in a French Life, here. Meantime, we're working on making the next book, "Blossoming in Provence", available very soon!

Reader Gary McClelland is back today with another outdoors French adventure. Thanks, Gary, for putting together this entire edition, including the word of the day, the example sentence, the vocab section and, along with ami Chris Saricks, all of the photos!
.
Biking the Rails in Provence
By Gary McClelland
Photos by Chris Saricks and Gary McClelland
After finding a place to park in the village of Pourcieux, Chris and I dashed toward the station fearing we were too late for the 10:00 departure of our train. We thought we had allowed ample time but had failed to note this map warning on the website about the sortie from the autoroute closest to Pourcieux: Attention, cette sortie n'existe que dans le sens Nice-Aix. Alas, we were coming from the opposite direction. So we flew by our intended exit and had to double-back through town traffic and then on the N7, a mythical road that has a similar status of the classic Route 66 in the U.S. As we approached the affable station master awaiting us in
his converted blue and white trailer, the church bells chimed 10. I panted, “Bonjour Monsieur, je suis désolé.” He looked surprised and asked, pourquoi? The website clearly recommended we arrive 30 minutes before our departure, not 30 seconds, so I said, “Parce que nous sommes en retard.” “Mais non,” he smiled, “le train reste ici.”
After a little paperwork and instruction, Chris, my train buff friend from college days, and I were adjusting the height of the bicycle seats on our vélo-rail car. We were going to pedal our little train car the seven km from Pourcieux to St Maximin-la-Sainte-Baume and then return. Throughout France, many sections of abandoned
railroad tracks have been converted for use by touristic pedal cars carrying from two to five people. As both avid cyclists and train buffs, Chris and I had to experience vélo-rail. Even though each group would be pedaling their own car, there was a strict departure time for the train because passing, either coming or
going, was not possible. The website warned that in St Maximin we would need to help turn our heavy cars around afin de soulager les vertèbres of the train personnel.
We had chosen to bypass the vélo-rail in Plan d’Orgon, closer to where we were staying in Bedoin, because the Chemin de Fer de la Sainte Baume leaving from Pourcieux promised tunnels, viaducs, et ponts with views in many directions. As we pedaled up the easy but noticeable 1.5% grade to the tunnel, Chris explained that tunnels were usually at the top where the surveyors could no longer find easy grades. We could barely see la lumière à la sortie of the 180 meter Tunnel du St Pilon. We thrilled at the rush of the wind in our hair from our increasingly speedy descent until we began worrying about climbing this same section of track on our return. The promised views did not disappoint and we stopped on a viaduc for photos (being the last car in this morning’s train, we had no fear of blocking anyone).
Too soon we were at the end of the line in St Maximin. Pirouetting the car using the metal plate between the tracks disturbed the vertèbres of neither me nor the train man. Now as the lead car, Chris and I could not dally, but neither did we need to rush because the car behind us had three passengers and we had none. We pedaled hard on the climb so again we had time to stop for photos. Soon we were through the cool tunnel and racing for the station in Pourcieux. As we rounded a bend, a beautiful view of Cezanne’s Montagne Sainte-Victoire appeared. After another pirouette of our vélo-rail car to be ready for those voyagers departing on the noon train, we began our drive home, eschewing the autoroute for the nostalgic N7 and discussing our morning’s sortie très agréable on the rails of Provence.
.
Information about Le Velorail de la Sainte Baume, as well as links to numerous other velorails throughout France, is available at http://www.veloraildefrance.com/
Gary McClelland is a professor of psychology and marketing at the University of Colorado. He became a Francophile while spending a summer as a student in Paris in 1967.
.
Le Coin Commentaires
To comment on Gary's article, or to share one of your own favorite things to do in France, click here.

.
French Vocabulary
listen to these words 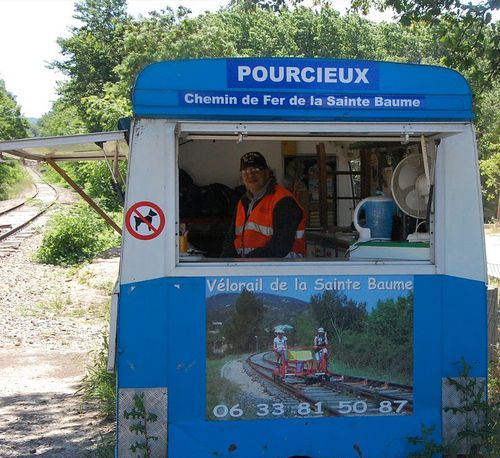 Our amiable station master in Pourcieux 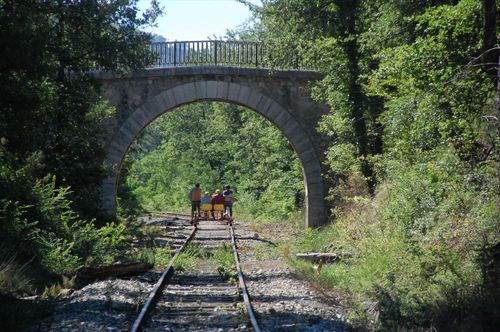 The lead car in our train 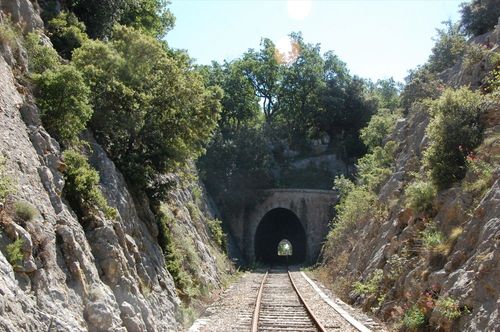 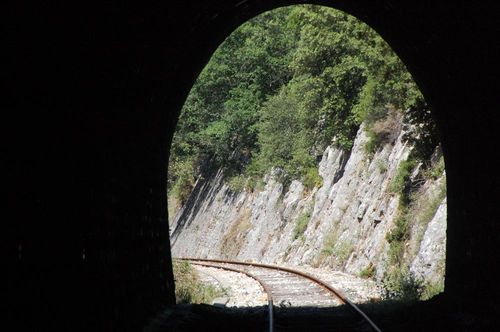 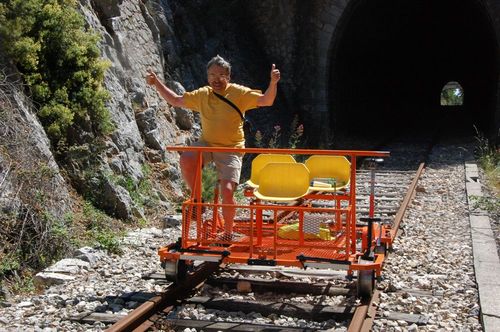 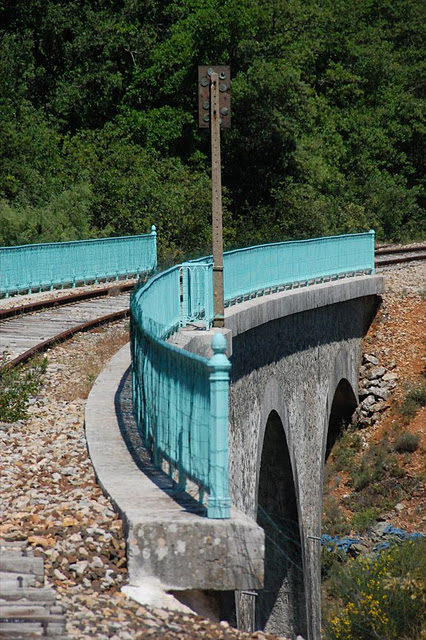 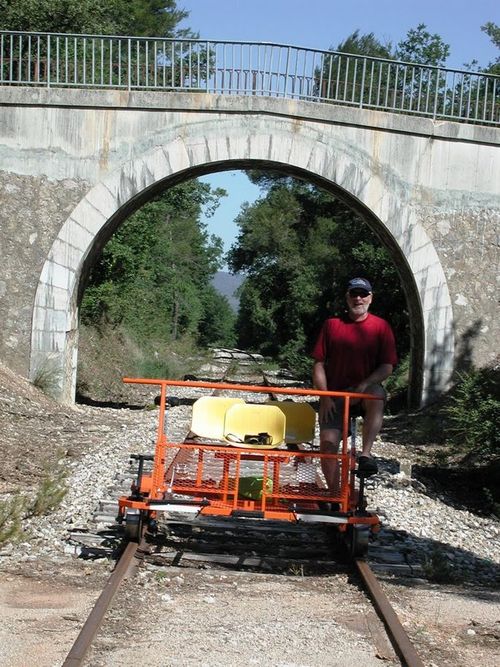 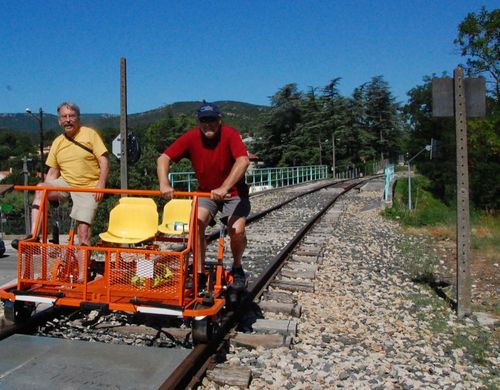 Chris and Gary on their saddles in St Maximin 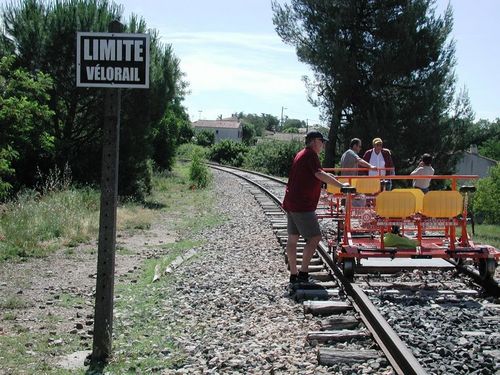 Preparing to pirouette the car on the metal plate 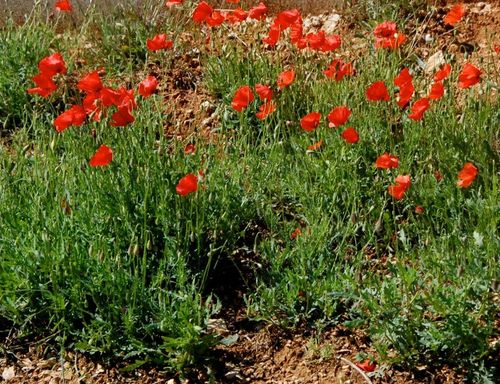 Les coquelicots along the tracks 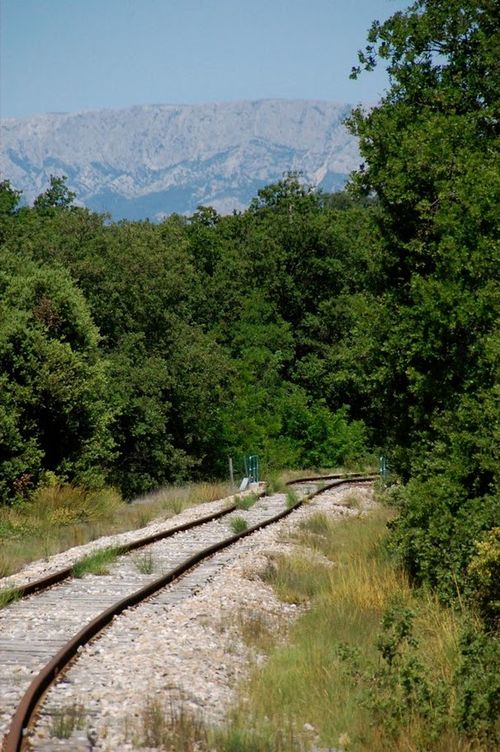