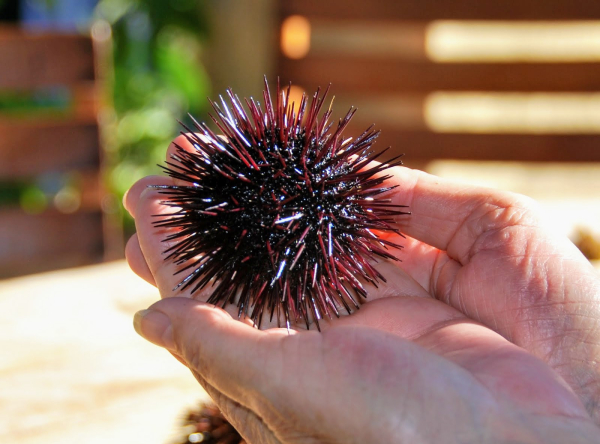 A sea urchin, or oursin, is very prickly. You wouldn't want to step on one while wading out to sea! Today's popular French expression has a funny take on these underwater creatures...

: to be stingy ("to have sea urchins in one's pockets")

The other day, while allowing myself to soak in a hot bath (instead of taking another one of those speed showers, this, during the 21 Day Publishing Challenge), my daughter ran into the room:

"Maman, someone is knocking on the door!"

"Then why aren't you answering it?" I snapped. How ironic that the minute you allow yourself a reprieve, Life's whirlwind suddenly picks up again!

I softened my tone. "Hurry over to the fenêtre and see who's there."

Jackie took her sweet time to glance out the window, to the cours below. "C'est les pompiers."

The firemen? Zut! That could only mean one thing: Calendar Sales! I felt the urge to slip under the bath water and disappear... Instead, I had another of those inspirations....

Don't be stupid, I thought. Now's the time to get to know these local rescuers. For so many years I never needed anybody... and then I ran into a health scare that made me wake up to my very weakness and my need for others.

I felt a little guilty about my sudden motivation to greet the pompiers. After all, my automatic response had been to get out of paying for another calendar (by hiding from the pompier-salesmen), until it occurred to me to turn the "invasion" into an opportunity.

I threw on my robe and ran over to the window, careful not to slip across the wet floor. In my most welcoming voice I shouted:

This time I threw on my jeans, a t-shirt, a sweater, slippers, and hurried down the stairs. There was no time to cover up the surgical wound on my forehead, so I simply assured myself it didn't matter; after all, here were the firefighter-saviors. They had seen much more than this!

That said, I felt the need to explain the "double cross" or "H" mark on my forehead, which looked, at best, like an accidental calf branding and, at worst, like some sort of freaky occult symbol! Surely the pompiers would think we sacrificed more than grapes here at our so-called "vineyard"!

"Bonjour!" I greeted the pompiers. Pointing to my head, I made what might have been a very bad joke: "I've been burned!" I laughed off the uncomfortable moment, explaining that it was the sun that had made a bad spot on my forehead and that la mauvaise tache had recently been taken off.

The pompiers handed me their calendar for inspection. Remembering my kiss-up-to-the-firemen agenda, I took the time to peruse the calendar, making a point to linger over the scenes of bravery featured in the months of "Mars" (a car fire) and "Juin" (a forest fire).

Still, no matter how self-motivated I was to kiss up to the firefighters, in the hopes that they would remember me in my day of need, I felt that familiar resistance to fork over the cash for the calendar. I guess I was experiencing another attack of les oursins dans les poches, in which those prickly, figurative "sea urchins in my pocket" were preventing me from reaching in for the money just beyond.

I sucked up and reached in any way, in time to finger the 50-euro note that I had grabbed on the way down the stairs. Jean-Marc had just given it to me the day before, and I had high hopes of holding onto it for a while... and then the calendar salesmen arrived!

A new dilemma presented itself: combien donner? Firemen's calendars are not priced. Kind of like restaurant tipping, each citizen gives what he or she feels like giving. This French concept has always been much too vague for me, so I asked the pompiers to spell it out, clearly:

"How much is your average donation?" I inquired.

"Les gens give anywhere from ten to twenty euros," one of the firemen answered.

Determined not to be a cheapskate (and keeping firmly in mind my agenda...) I began to hand over the 50-euro note, and to ask, politely, for thirty back. Still, I noticed how heavy my arm felt while reaching for the cash...

That's when I had another inspiration. Couldn't I get a little more value for my money? More than a 16-page calendar? I was a little ashamed of this devil-on-my-shoulder-inspired thought, but it didn't keep my inner radine from acting on the idea.

"Un moment, s'il vous plaît!" I hurried into the house and rooted through the pantry for a couple of unopened smoke alarms. It had been four years since I bought the détecteurs de fumée. I still hadn't installed them... I think I was waiting to buy batteries or something.

I watched as the firemen cut open the dusty boîtes and freed the alarms from the industrial-strength plastic packaging. The men checked the batteries (which, it turns out, came with the units...), showing me how to do the battery test.

I asked the firemen's advice about where, exactly, to place the alarms, and how would I know whether they really worked (again, they pointed out to me the battery-test button...). With each question, the pompiers responded with patience and encouragement. They even praised me for my foresightedness in buying the alarms (graciously overlooking my failure to install them), informing me that in 2012 such alarms would be required by French law.

Fully satisfied with the transaction, I finally handed over the cash for the calendar and the service. I figured I had gotten a lot of value out of the deal.

I did feel a little guilty about wanting to get my money's worth at the pompiers expense, but if it took stinginess to get those lifesaving smoke detectors working, then so be it!

It's no fun to face up to one's own flaws and so I'll try to be more aware of my tendency to hold on to things (my cash? my time? my ice cream?) and be more open to occasions to put Mom's words into practice: Give! Give as much as you can at every chance! Give, give, give! Though I have literally watched my mom give away her last $20 (to a stranger), I will try to find the balance between keeping and giving. What is that balance? Does anybody know?

Le Coin Commentaires
To leave a comment on this post, click here. Please take a minute to note what city you are writing in from (my dear dad loves to know!)

Surgery wound update! Some of you have written in, asking me to post a more updated photo of my forehead. Click here to view a photo taken just two days ago.

Book update: today Erin at TLG Graphics will receive the manuscript and begin working on my book's interior! Wish her bon courage!

oh là = hang on a minute there!

c'est les pompiers = it's the firemen

avoir un oursin dans la poche = to be stingy, miserly; literally "to have a sea urchin in your pocket" (preventing you from reaching past it to the money just beyond)

combien donner? = how much to give? 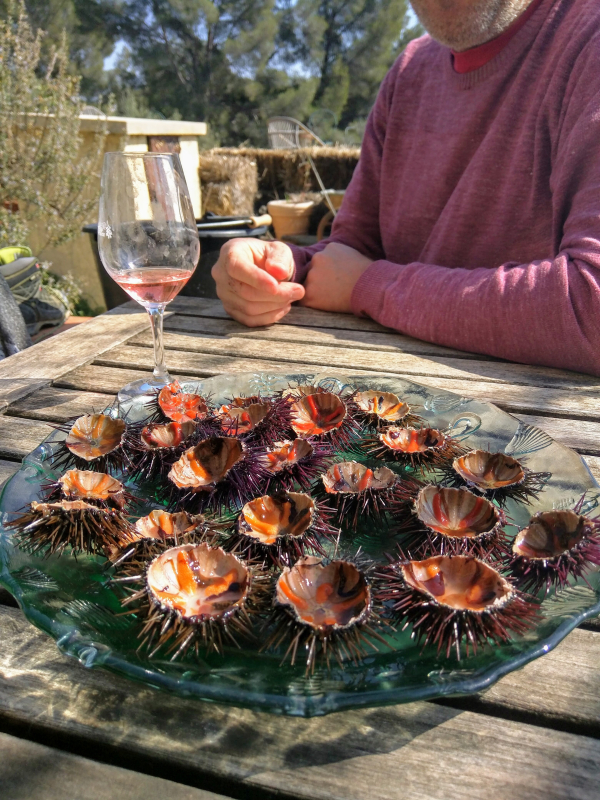 Jean-Marc loves sea urchins, "les oursins." Do not miss this funny story about the lengths he will go to in order to hunt them off the popular southern island of Porquerolles.