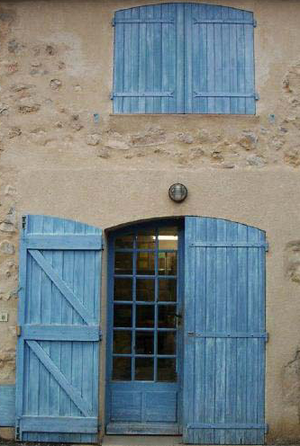 Photo of a French door and its hesitant greeting.

saluer (sah-loo-ay) verb
to greet, to wave to, to nod to; to salute

Nobles et mystérieux triomphes qu'aucun regard ne voit, qu'aucune renommée ne paye, qu'aucune fanfare ne salue. Noble and mysterious triumphs which no eye beholds, which are requited with no renown, which are saluted with no trumpet blast. --Victor Hugo
.

Near the end of the vine horizon, where wheat-colored fields come to a halt before a massive steel hangar,* I saw her waving.

"C'est Madame Delhome," Jean-Marc said, lifting one hand off the steering wheel to return madame's friendly gesture. Our neighbor wore a checkered flannel top and faded blue jeans. She might have been an American farmer if she weren't French.

"Have you met her?" I asked my husband, who answered that he had not. My hand flew up as I waved back, encouraged by madame's initiative and friendliness.

As we drove past the row of vines that madame was pruning, I caught a glimpse of the handsome woman with the engaging smile and sun-kissed complexion as she paused from her chores to acknowledge us strangers.

That wave! In one generous to-and-fro motion the neighbor's greeting was unmistakable. Using the full length of her arm and in one natural and unaffected gesture she offered up the most warm-spirited acknowledgment of our existence.

Not that my own salutation would have been cold or even feigned; it simply would not have been. For too many complications would have cropped up at the instant in which I perceived "the new neighbors" (us) in the distance. Indeed, had it been me hunched over those vines when the new neighbors cruised past, heads in the clouds, my reaction would not have been as simple or as natural as Madame Delhome's had been. I would have hidden behind the very branches that I was tending.

Had I uncharacteristically taken the first step, the process would have been a complicated one and nothing like madame's spontaneous salutation. Whereas madame announced her location among the great field of vines, this with a grand flagging of the arm, I would have weighed the risk of signaling when chances were the passengers in the speeding car hadn't seen me in the first place. Oh, the hazards of appearing uncouth!

When I was certain that the new neighbors had spotted me, only then would my hand have cautiously inched up, all the while anticipating a signal back. In the event that the neighbors weren't actually noticing the awkward figure out there in the vines--but were, horror of horrors, pointing to the dazzling sunset just beyond, then a bit of emergency backtracking would be necessary. I would have to save face by swatting the air as if shooing a mouche.*

And though I sit here, weeks later, practicing Madame Delhome's friendly wave, I must say: it just isn't easy being simple. But then, as my husband says to me, sometimes gently, but more often while swatting his own forehead in exasperation:

"Pourquoi faire simple quand tu peux faire compliqué?!"
Why be simple when you can be complicated?!

Shopping:
Rosetta Stone French (CD-ROM) -- "an award-winning method used by NASA and the Peace Corps"
FRANCE -- English-language magazine covering France & "the next best thing to being there."
A money belt for traveling. Perfect size for your passport and currency.
A book that I have just ordered, and another that I am currently reading. Check them out and don't miss this non-French-themed favorite!