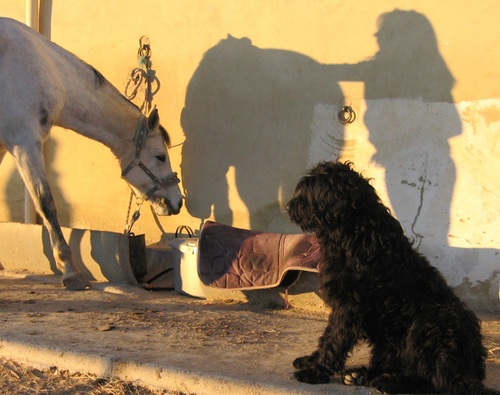 The French verb cravacher (kra-vah-shay) means "to use the crop on". Spend time at "une écurie," or "horse stable," and you'll come across the term "cravache" ("whip"). From it, we get the verb/idiom "cravacher" which means: "to work like mad" (imagine a horse being "whipped into high speed"...). While the French word for "kick" (coup de pied) would have been more in theme with today's story, I hope you'll get a kick out of "cravacher" ("to whip") instead.

Book notes: I love the following French memoir and hope you will, too!: The Horse of Pride: Life in a Breton Village: "A landmark in the art of storytelling. Read it aloud; some passages will bring a catch to your voice." --Gloria Levitas, The New York Times Book Review
.

I did not get the equestrian gene from my mother, whose horse "Navy Pistol" had wings. In horsespeak that's called jumping, and that is as much as I know about cheval* terminology. A horse once left me speechless after the two of us became one: one streak along the desert horizon. Back in Cave Creek, Arizona, I had unknowingly given a horse free rein when, new to riding, I held the leather "handles" as one would a dog leash. Gripping the ends of the reins I was, in turn, gripped by fear as the giant four-legged thunderbolt suddenly had a taste for branches, and for running its 14-year-old rider beneath them.

My ten-year-old daughter inherited the equestrian gene. I watch as she brushes Virgule,* one of the horses at the stable where she takes riding lessons. I admire her confidence in caring for a creature that both towers over her and more than triples her digits in kilos.

It was while helping my daughter suit up that my fear of horses became engrained. Handing Jackie the safety vest, she traded me the reins to her horse. My daughter stepped forward to change and I, taking the reins, felt her horse rear its head and, in so doing, upset the horse standing beside it--and
me...

The moment that followed was like the scream heard round the stables: piercing in quickness and surreal in scope.

One minute I had been standing between two horses, up at the front, and the next I was spinning--or so my mind's eye would have me think. My own eyes, while in stress mode, had shut out the scene. That is when my mind's eye took over. What I "saw" were horses dancing on hind legs, their "arms" flailing. It was a slam dance of sorts and my instinct was to get off the dance floor as quickly as possible. I did this by a type of two-step "twirl-scream" and, next I knew, I had spun out of the mosh pit (this, it turns out, with the help of several swift kicks in the fesse* by the aggravated "dancer" to my left).

The mind's eye works like an old-fashioned camera: without sound. When the silent film finished playing and my own eyes opened up, volume returned. I came to my senses in time to catch the tail end of a scream: my own.

I put my hand to my head, which was surrounded by a halo of stars--three lanes thick and orbiting at several hundred kilometers per hour. I felt at once nauseous and weak. The French expression "falling into the apples"* took on new meaning as I searched for a place to sit down before my head, full of emotion, hit the ground.

"Are you okay, Mommy?" my daughter quizzed. I realized that I was just fine--considering that the question might have been the other way around.

I should add that, like motion pictures, my emotions made the previous "picture" Three-D dramatic... when the humble reality was that I had received no more than a kick in the rear!

"Horses of the Camargue" (book): Since prehistoric times, these rugged animals have run free in the vast swamps of the Rhone delta, where they have adapted to harsh conditions by banding together in small herds. See the book. 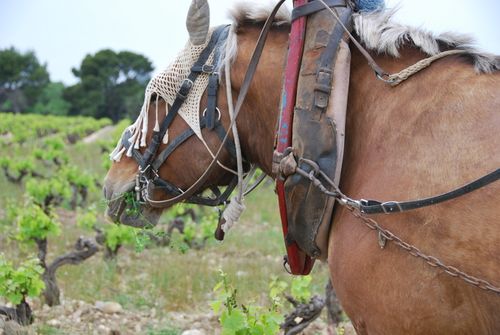 This beautiful horse lives in a nearby village and works in the vineyard there, helping to plow the fields in organic farming. The hand-crafted "headgear" seems to be a kind of nifty fly repellent.

Shopping:
French Demystified : A self-teaching guide "simple enough for a beginner but challenging enough for a more advanced student"
Pronounce It Perfectly in French: presents exercises in sound discrimination and accurate sound creation
Travels with a Donkey in the Cevennes