Piquer: Guess who moved out of our house and stole away with our stuff? 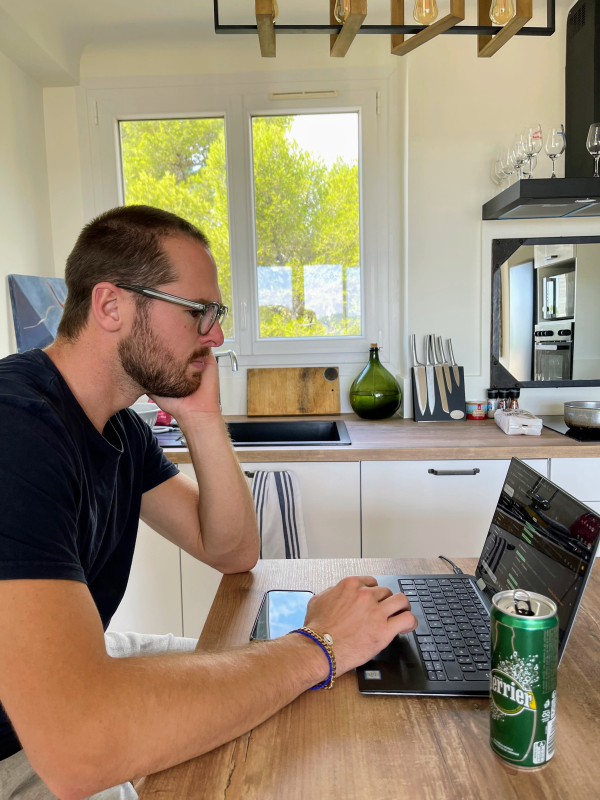 Max, working from his new îlot central. After 8 months of renovation, our son is finally settled into his new appartement.

Visiting La Ciotat or a nearby town? Stop in and see us at Jean-Marc's wineshop. Call ahead and we'll set up a visit.

Her Own Legacy by Debra Borchert: A Woman Fights for Her Legacy as the French Revolution Erupts. Available in paperback or read it on Kindle


FRENCH SOUND FILE: Click the following link to hear Jean-Marc pronounce piquer +hear all of the French words in today's post. Then scroll down to the vocabulary section to check your French comprehension.

Mom and I were driving to Max's new digs when I cautionned my passenger for the nième time to Hang on!

But what is there to hang on to when you are seated with a cactus? We had just bought the prickly housewarming gift at la pépinière's, only to discover it was too tall to fit into the back of our jeep. That left the passenger seat....

As the tires eased over another nid-de-poule in the road, Jules shielded herself with a flimsy towel, using it as a barrier between her and the spiky cadeau which was set on the floorboard and stood level with Mom's shoulders. By the time we arrived at Max's condo complex, both driver and passenger were already worn out from the gift-buying adventure. Only now there were four flights of stairs to climb (pas d'ascenseur), to make it to Max's pad.

Introducting FLOF = "Free Lunch on Friday"...
We are so proud of Max for the way he planned and orchestrated the renovation of his appart (make that "condo" in English,  because even if apartments and condos look similar in France, in some cultures you don't buy an apartment--you rent one). Max called on friends and family for all works associated with his condo and managed this bighearted team on his own. Max and Uncle Jacques demolished walls and Jacques put in the dry wall, Aunt Cécile did the woodwork, architect friend Zoë drew up a floorplan, pal Clément installed the electricity, best friend Yann, his brother, and father put in the floortiles, Anaïs added many loving final touches and Jean-Marc and I did various errands and a lot of cooking! In the 8 months it took Max et compagnie to renovate his apartment, and while he continued to live here at home--nourri, logé, blanchi--I often hinted that it would be nice to eat chez lui one day. "We can call it FLOF! Free Lunch on Fridays!" Thus, FLOF was born and here we were, about to enjoy a meal--our first FLOF--chez Max!

But, as guests...what to buy for someone who has everything? Let me tell you a little bit about how that happened. First, do you know the verb in French for "swipe" or "steal"? It's "piquer"! Here are some examples/funny synonyms of piquer--as well as a list of missing items from our family home:

Max a piqué le canapé... he nabbed the couch

il a piqué la lessive... he pilfered the laundry detergent

il a piqué le miroir... he lifted the mirror

il a piqué le repose-pied ... he stole the foot rest

il a piqué la planche à découper...and he ran off with the cutting board!

(He yanked that last item right out from beneath the veggies I was about to chop! And, as usual, he offered a grinning and irresistable explanation: he's taken these items in the name of sentimentality. He grew up with a lot of this stuff--and would like it to live on chez lui. Blame it on la nostalgie!) As for the shower gel and clothes soap, his sister stole it back. (Go, Jackie!) I'd like Aunt Cécile's cutting board returned, but it does look good in Max's kitchen and who can resist that devilish grin, that twinkle in his eyes that says: it's mine now.

Despite all that our son looted, I still got him an early crémaillière present. So, you might ask, what does one offer someone who steals? (Quelqu'un qui pique?)

Something piquant, of course!

And so, dear reader, we got him a cactus. 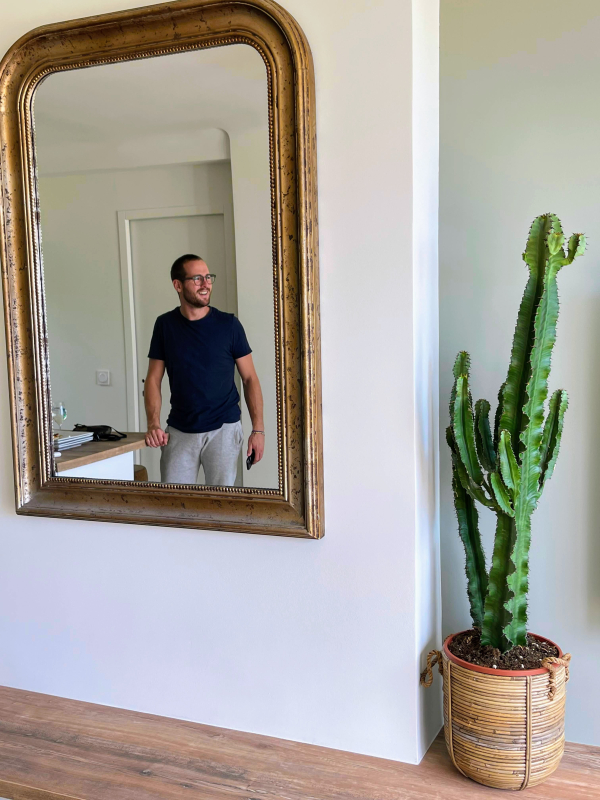 The cactus gives a touch of Max's southwest American roots. 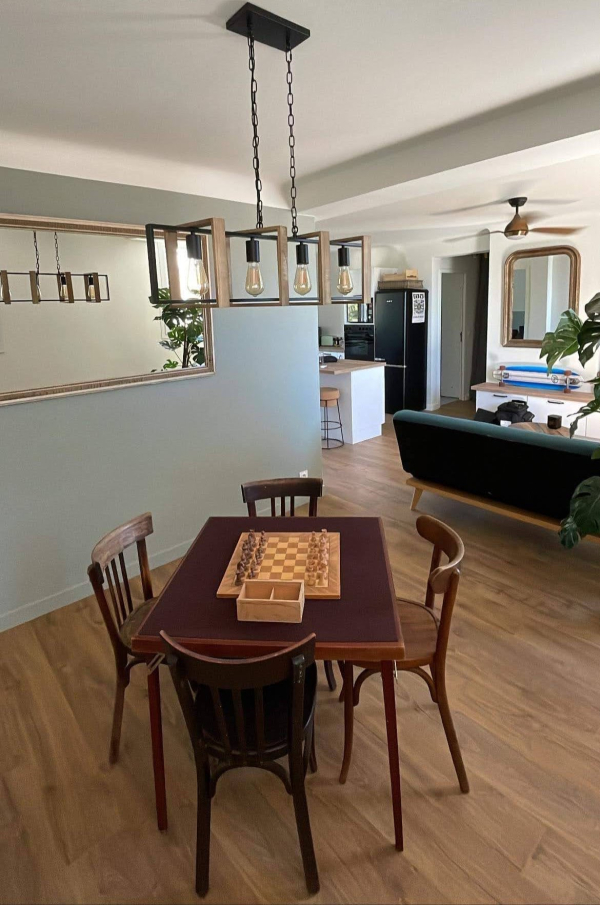 While saving for a dining room table, Max is using this foldout card table (also snatched from our place...). He got the bistro chairs free, too, from our friend Fabrice, at Le Vin Sobre Marseilles, who was clearing out his own wine shop. The chess board was a gift from grand-mère Michèle-France, years ago. Max's cork bar stools (you can barely see one there at the kitchen island) are are available here. The bar stool reminds us of a champage cork and the wire cage surrounding it.

***
Related Stories from the Blog Archives:
Mortgage is a Creepy Word... (Max looks to buy an appartement
Nid-de-Poule - insight into one of our vocab words via a story Max wrote when he was in high school
Cécile's work - a story about my belle-soeur 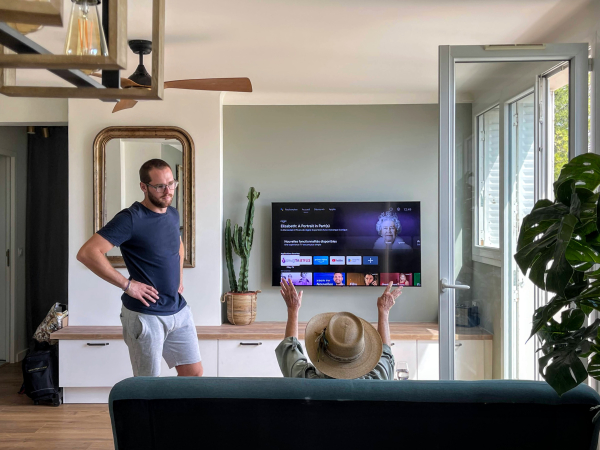 Max and his grand-mère, Jules 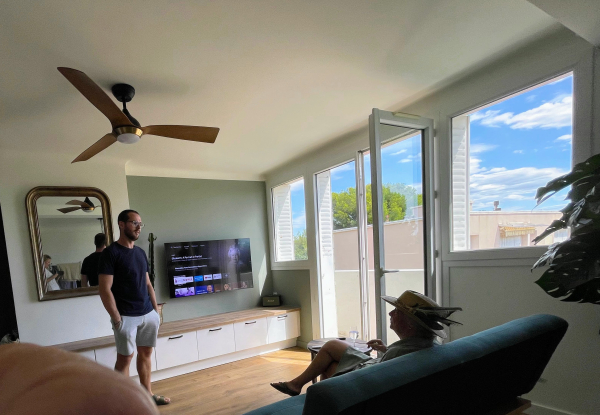 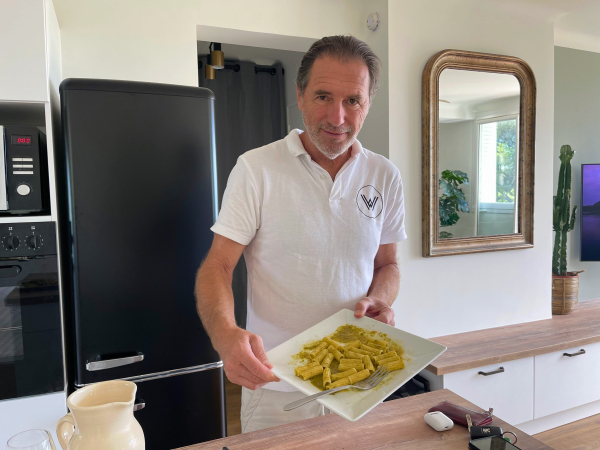 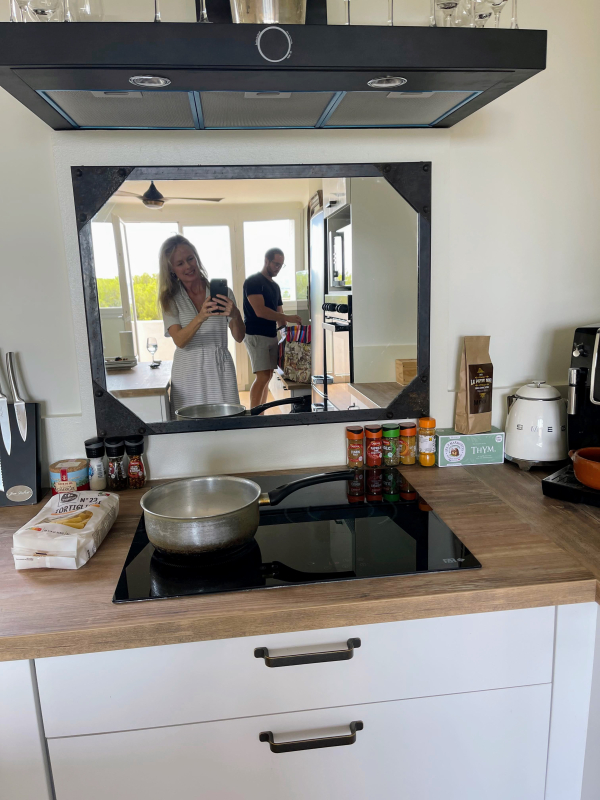